There are times the markets move the average range in say a widely traded instrument such as the Nifty futures. These are the times the markets are quieter and confirming to the normal, and most traders and most systems of trading would be good enough to get you through to profits, in your chosen strategy.

But what happens when you get days when the market moves away from the Normal?

These days are rare and you would get 3 of them in maybe 50 sessions, or even 100. But any person who has traded long enough in the markets would tell you that these have the potential to make big impacts on your trading account.

For most of the retail crowd or the newbies, that impact is mainly through big losses. The markets can take away several sessions (and even months) of profits in one hour of trade.

I have traded a period in 2007- 2008 where I have seen even big institutions failing to recognize the changing information the market is giving, and giving up 5 to 8 years of gains back to the market.

One of the main reasons why people fail to recognize the changing modes of the markets is because they are still dependent on old archaic methods of trading many of which are redundant in today’s fast-moving algo driven liquid markets.

A common method which people use to chart their instruments is the candlestick. This is promoted to new traders by so-called gurus on social media and on television, many of who, can hardly trade a fast moving market situation and still live with outdated ideologies from a decade back, but are adept in giving lectures in seminars and workshops.

Let’s look at why candlesticks hide more than they reveal. For an example let’s look at an above normal date and let’s choose the Nifty futures trade date 21st September 2018 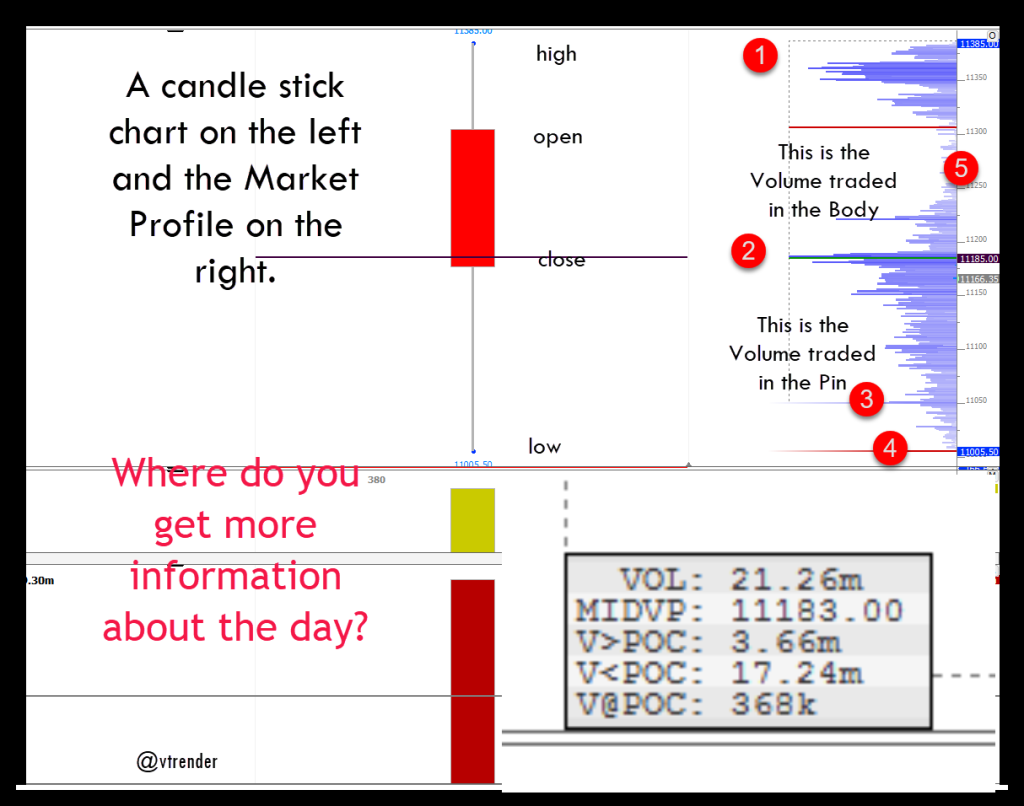 On the left of the chart in red, you have a daily candle of the Nifty Futures of  Friday 21st Sept. You got:

And yes, you also get the color of the bar, which in this case happens to be red.

Isn’t it just strange that just because it closes below the Open price the body should be colored red and if it was 10 points above the open, the body would have magically been green?

On the right, we have a Profile study ( in blue)  which will tell me

a) All the points from a to f mentioned above including the Open, High, Low, Close, Range and Volume

b) At 11185 on the chart, I have a horizontal line which is the Highest Volume Traded during this Volatile day. We call it the POC or Point of Control (will speak on this later )

e) And finally, if you look the Volume cutout in the third pane it will tell you that there is more volume in the so-called pin of the bar than the body itself ( and they want to give importance to the body and even assign it a color)

So, what do you think, where is their more information to be gleaned from the auction of Friday. The Market profile or the candle stick?

Auction, POC, Value, profile are all core Market Profile subject words and you can find more about them at – MARKET PROFILE TERMINOLOGY

Definitely, the chart on the right has more info for you to make proper trading decisions on.

As a Market profiler as the day progressed we saw

g) it bounced back into the close again. This is what we call an OrderFlow chart. It is an advanced application of the Market Profile charts.

And the difference between this chart and the one posted above on the right( in the first image), is that we break the Volume down into what was traded by the Buyers and the Volume traded by the sellers.

Now would you be buying into a market where you suddenly see there are more reds ( or sellers)?

And would you think of booking profits after a sell when you see the greens coming?

It’s elementary right. That is the power of having added information on your fingertips. It converts the guesswork to something actionable.

We live in a world where information is taking over everything.

Beyond the green and the pink, there is nothing over there and 30 minutes would have been enough to burn a hole in your account.

The markets especially the shorter term (  if you are a derivatives trader and taking positions in Futures and Options) have become faster and faster. On Friday we traded a months range in a day and this would continue again. As a trader, you need to make the adjustments.

Yes, there will be a few individuals who will be brilliant and ace the markets time and again. They are like the Virat Kohlis and the Dhonis and the Federer and the Nadals who will excel in whatever they do. They have the ability to work on themselves and overcome situational shortcomings.

But for the vast majority of us, we need access to better systems to make a mark in this field. The Kohlis and the Federers are born once in a generation.

The trading world is full of the graveyards of new traders who succumbed to :

a) A lack of knowledge of Trading setups/ systems

b) Over dependent on systems which have zero edge and don’t give out cutting-edge information.

And then there are these tip providers and page 3 celebrities and media gurus who cannot bring a dime back to their accounts from a trade, but would be out to advise people on how it should be done.

I made the transition to working with Market Profile and OrderFlow charts about a decade back. I do not sell a charting service, nor play as an ambassador for any one, Market Profile or otherwise. This post is for those people who asked me how I bought the 11200 pe on Friday at 70 and sold it for 170 about 20 minutes later

I run a premium service on how to use the information from the Market Profile and OrderFlow charts to your advantage. The costs are for my time and the information/ experience I have.

If you like to make a transition to OrderFlow trading, then I can show you a method at – https://vtrender.com/trading-room/

Check it out. It will be 10 minutes well spent.