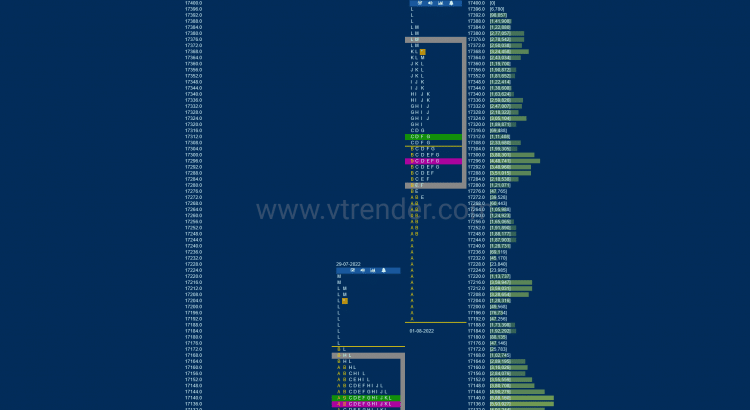 NF made a lower open and continued to probe on the downside in the IB as it tested yesterday’s A period singles of 17251 while making a low of 17241 in the B TPO and took support there as was seen in the tiny responsive buying tail it left till 17248 in the C side.

The auction then filled up the day’s profile forming a nice Gaussian Curve till the I period forming a Normal Day but made a pretty late RE to the upside in the J TPO and followed it up with higher highs in the K & L too as it completed the 1.5 IB objective of 17411 which was also the Weekly 3 IB target while making a high of 17420 and saw some good profit booking coming in which led to a move back to the dPOC of 17309 into the close.

Value for the day was overlapping to lower giving a nice 2-day composite at 17252-17324-17352 and a move away from this balance would be watched for in the coming session(s). Click here to view the 2-day composite on MPLite.

BNF opened with a gap down of almost 200 points but held just above yesterday’s Extension Handle of 37726 & gave a quick bounce to test the yPOC of 37928 as it made a high of 37938 in the A period but was swiftly rejected leading to a good fall in the B TPO where the auction made new lows of 37667 holding above this week’s VWAP of 37662 indicating demand coming back.

The C & D periods then formed a balance staying in the range of B before BNF gave a big RE to the upside in the E TPO as it not only scaled above PDH but went on to tag the 1.5 IB objective of 38073 to the dot but saw the dPOC shift higher to 38058 which meant that the longs were booking out triggering a move back to the day’s VWAP in the G & H periods where it left similar lows near 37855.

This defence of VWAP meant that the buyers were coming back which caused a fresh RE in the J period which went on till the L as the auction completed the 2 IB target of 38208 while making a high of 38232 and once again saw huge profit booking along with some fresh supply which not only effecting a break below the dPOC of 38057 but also tagged the VWAP of 37956 while making a low of 37892 into the close.