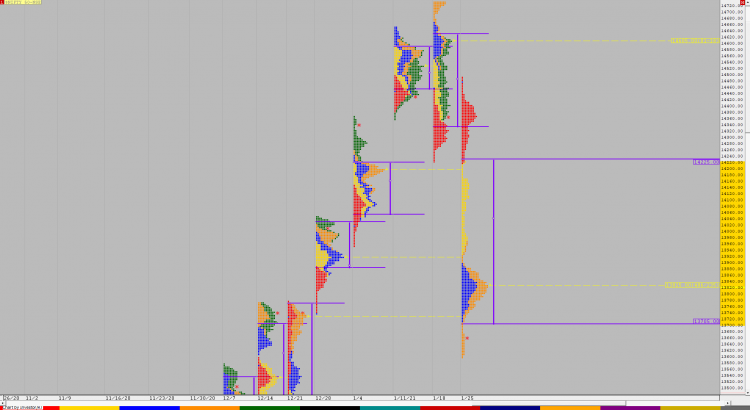 NF opened lower negating the extension handle of 14779 and got stalled right at the yPOC of 14820 in the probe higher after which it formed a relatively narrow IB range of 76 points filling up the low volume zone of previous day’s ‘p’ shape profile and for a change the C period was a silent one staying in a range of just 24 points. The ‘D’ period then made a RE (Range Extension) attempt lower as it made new lows for the day at 14731 but was swiftly rejected back into the IB indicating demand coming back and this triggered a trending move higher till the ‘J’ period as the auction left an extension handle at the important level of 14823 and went on to confirm the first FA (Failed Auction) of the series at 14731 and tagged new highs of 14938. However, the weekly expiry option players came into play as NF stopped the OTF (One Time Frame) probe and made a retracement to 14881 into the close which attracted huge volumes as even the series POC has now shifted higher by 1000 points from 13886 to 14879. Value for the day was overlapping on both ends hence leaving a 2-day balance at 14770-14881-14900 and the FA point of 1471 will be the level to hold for a probe to the 1 ATR objective of 14998 in the coming session(s). 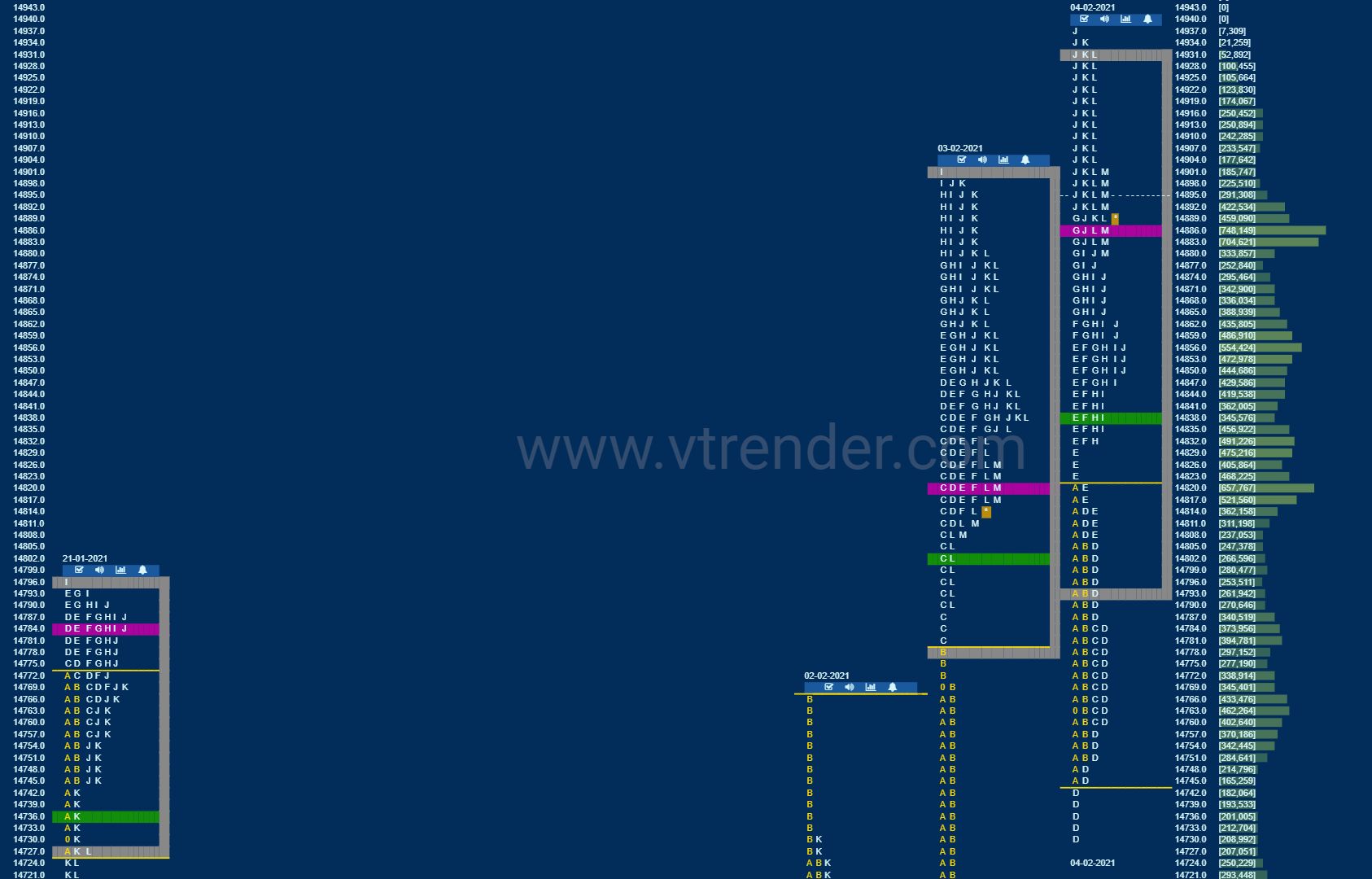 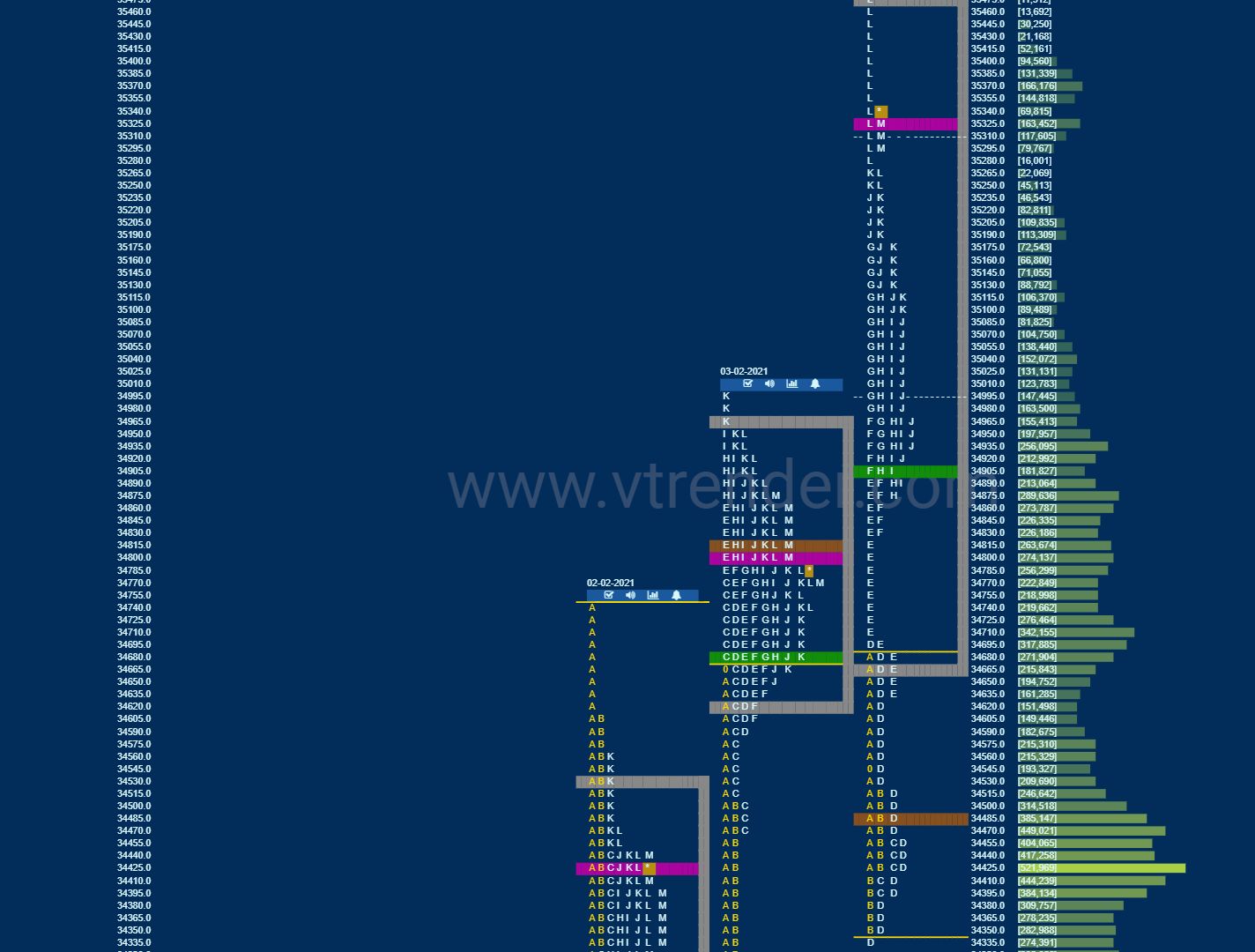 BNF continued with the trend of giving a big gap at open but for the first time in 4 days the gap was on the downside as it opened at 34551 well below the yPOC of 34808 and in the initial probe higher got stopped right at yVWAP of 34686 as it made a high of 34691 in the ‘A’ period which indicated that the PLR was to the downside. The auction made a lower low of 34364 in the ‘B’ period as it left a selling tail from 34518 to 34691 and formed a very narrow 58 point inside bar in the C period getting ready for the next leg and began the ‘D’ period by extending lower as it made new lows for the day at 34343 but was swiftly rejected from just above previous day’s buying tail of 34331 to 34097 and this meant that those initiative buyers were back in action. BNF then kept gaining in strength as it not only confirmed a FA at lows but went on to leave an extension handle at 32699 and completed the 1 ATR objective of 35217 as it spiked higher into the close making new highs of 35488 confirming a Neutral Extreme Day. The NeuX zone on watch for the next open would be from 35264 to 35488.