NF opened above the yPOC (yesterday’s POC) of 10020 giving a positive bias at open in spite of the OAIR start on the lowest 15 minute volumes of the series as it probed above PDH (Previous Day High) in the ‘A’ period but could not find new demand which then led to a complete retracement since open and triggered a ‘C’ side RE (Range Extension) lower as the auction made new lows for the day at 10040 but could not extend lower extend further in the ‘D’ period as it made a similar low of 10041. The yPOC of 10020 still holding along with poor lows meant that demand was coming back in this gap zone as NF got back into the IB (Initial Balance) in the ‘D’ period and stayed above it getting to VWAP where it got stalled for 3 consecutive periods from ‘F’ to ‘H’ but left a PBL (Pull Back Low) at 10071 in the ‘G’ period indicating that the supply was getting absorbed. The ‘I’ period then started a fresh move to the upside making multiple REs over the next 3 periods which also confirmed a FA at lows thus adding more conviction that the buyers were taking control as the auction almost tagged the 1.5 IB objective in the ‘K’ period getting into the selling tail of 3rd June and was met with supply which triggered a retracement to VWAP in the ‘L’ period where it left a PBL at 10110 before spiking into the close to make new highs for the day at 10184 leaving a Neutral Extreme profile. NF has now formed a nice 3-day composite with Value at 10032-10094-10158 (check the MP Lite chart of the composite here) and needs to get accepted above this for a new leg on the upside. 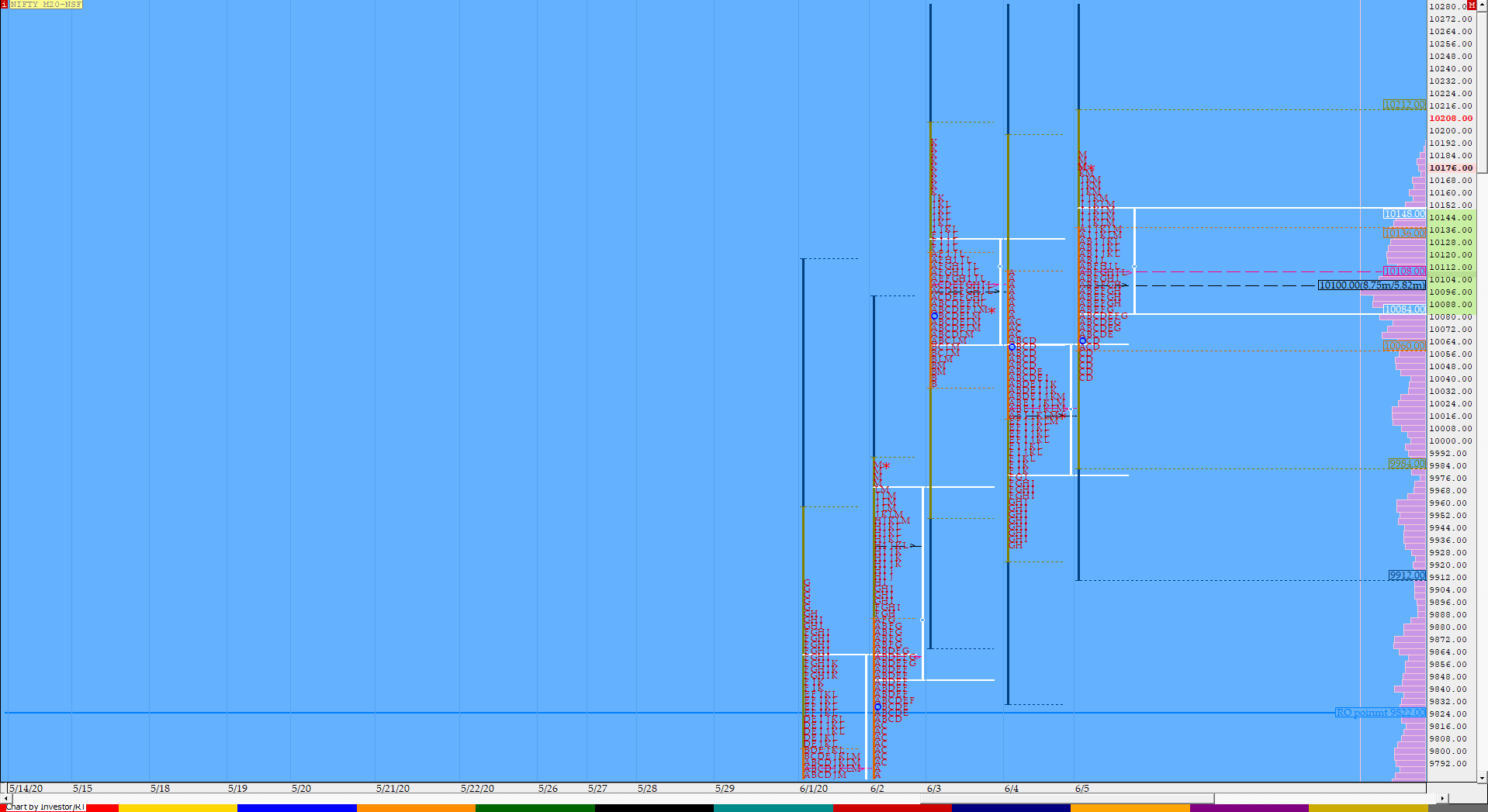 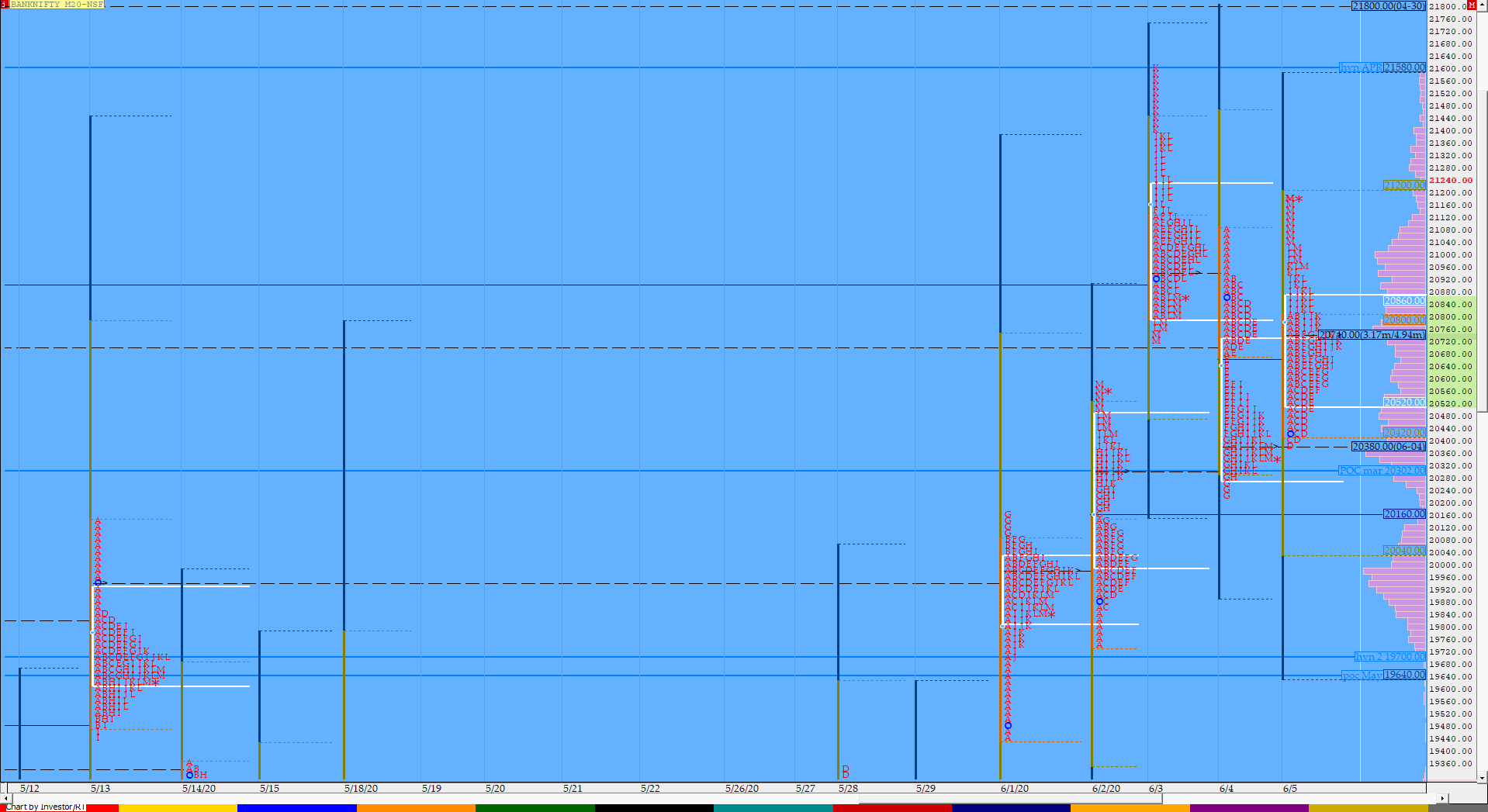 Previous day’s report ended with this ‘Value for the day was completely lower so staying below 20380, there is good chance that BNF could probe lower towards the extension handle of 20155 & the HVN of 19980 in the coming session.‘

BNF opened higher with a OH(Open=High) start at 20430 and started to fill up the low volume zone of previous day’s DD profile as it tagged 20817 in the IB but similar to NF, the auction made a ‘C’ side RE lower and followed it up with another mariginal RE in the ‘D’ period where it made a low of 20388 but could not break below that 20380 reference which was an important sign. BNF then reversed the probe to the upside making a trending move higher for the rest of the day as it not got back into the IB and scaled above VWAP but went on to make a RE higher in the ‘I’ period which confirmed a FA at lows and though the ‘J’ period gave a pull back to VWAP at 20640, the PLR had turned firmly to the upside as the auction spiked higher into the close completing the 1 ATR objective of 21148 from 20388 while making a high of 21192 leaving a Neutral Extreme profile in this index also. BNF has also formed overlapping Value in the last 3 sessions and the composite gives a balance at 20478-20761-21102 (click here to view the MP Lite chart) which means that the auction will need to stay above 21102 and negate the selling tail of 3rd June from 21399 t0 21611 for a probable move to the 2 ATR objective of 21907 from today’s FA in the coming session(s).