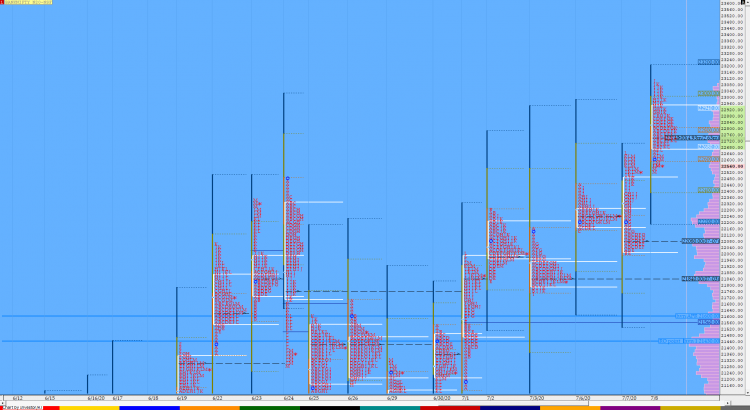 NF opened higher and made new highs for the series at 10817 in the IB (Initial Balance) leaving yet another small IB range of just 61 points which has been the norm of this week so far as it made lows of 10756. The auction then remained in this narrow range till the ‘E’ period where it made a RE (Range Extension) lower and made new lows of 10737 as it took support just above the composite POC of 10730 and reversed the probe to the upside forming a nice balanced profile till late afternoon. NF then made a RE on the upside in the ‘I’ period and followed it up with a marginal higher high in the ‘J’ as it hit 10829 but like on the downside it failed to even tag the 1.5 IB objective of 10848 which meant lack of demand and absence of initiative buyers at these new highs. This triggered a big long liquidation move as the weak longs were forced to exit in the ‘K’ period which went on to make new lows for the day and in the process confirmed a FA (Failed Auction) at highs. NF went on to make lows of 10675 almost tagging the 1 ATR target of 10663 leaving a Neutral Extreme Profile with an extension handle at 10737. The reference for tomorrow open would be from 10675 to 10718. 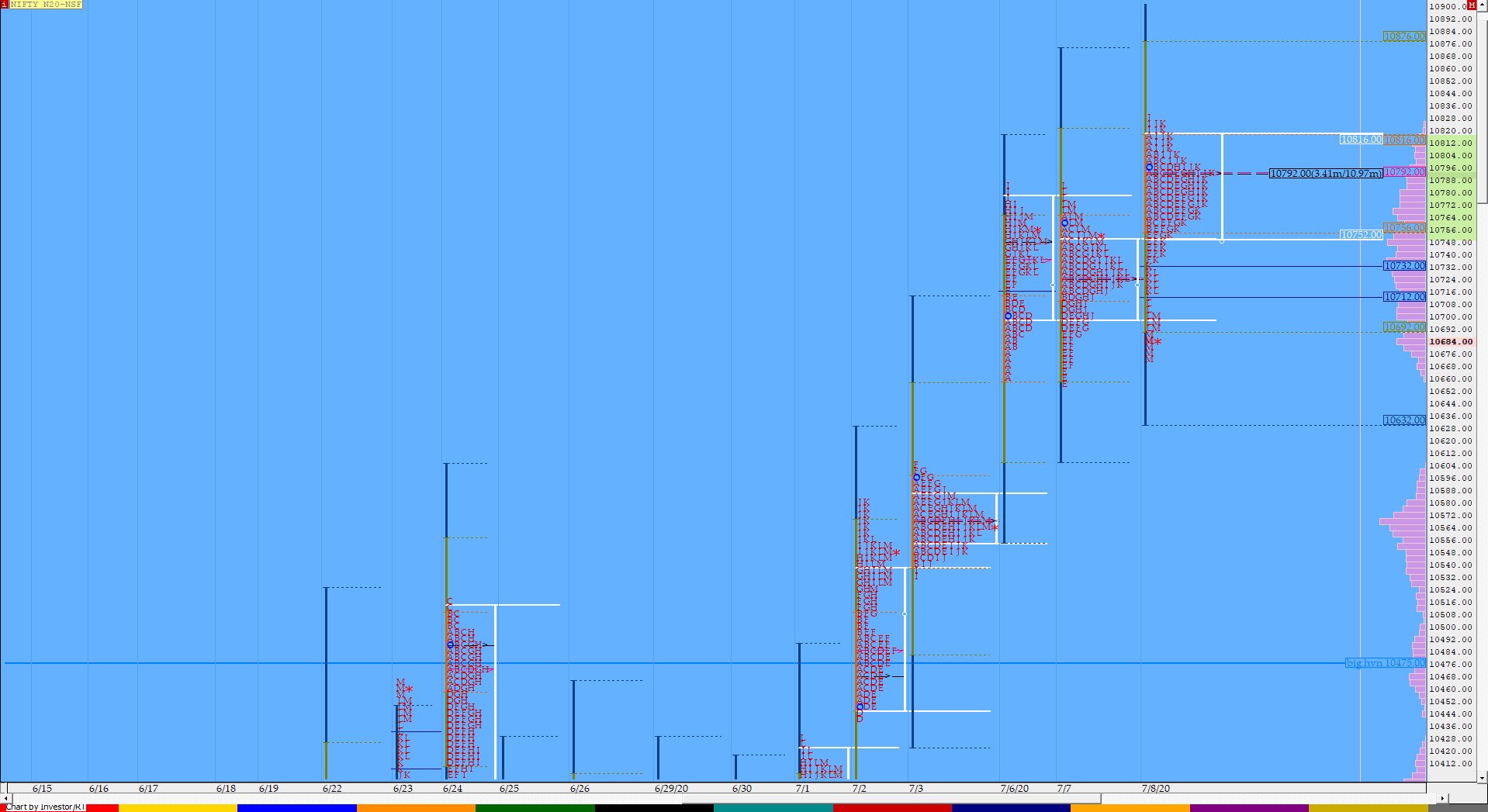 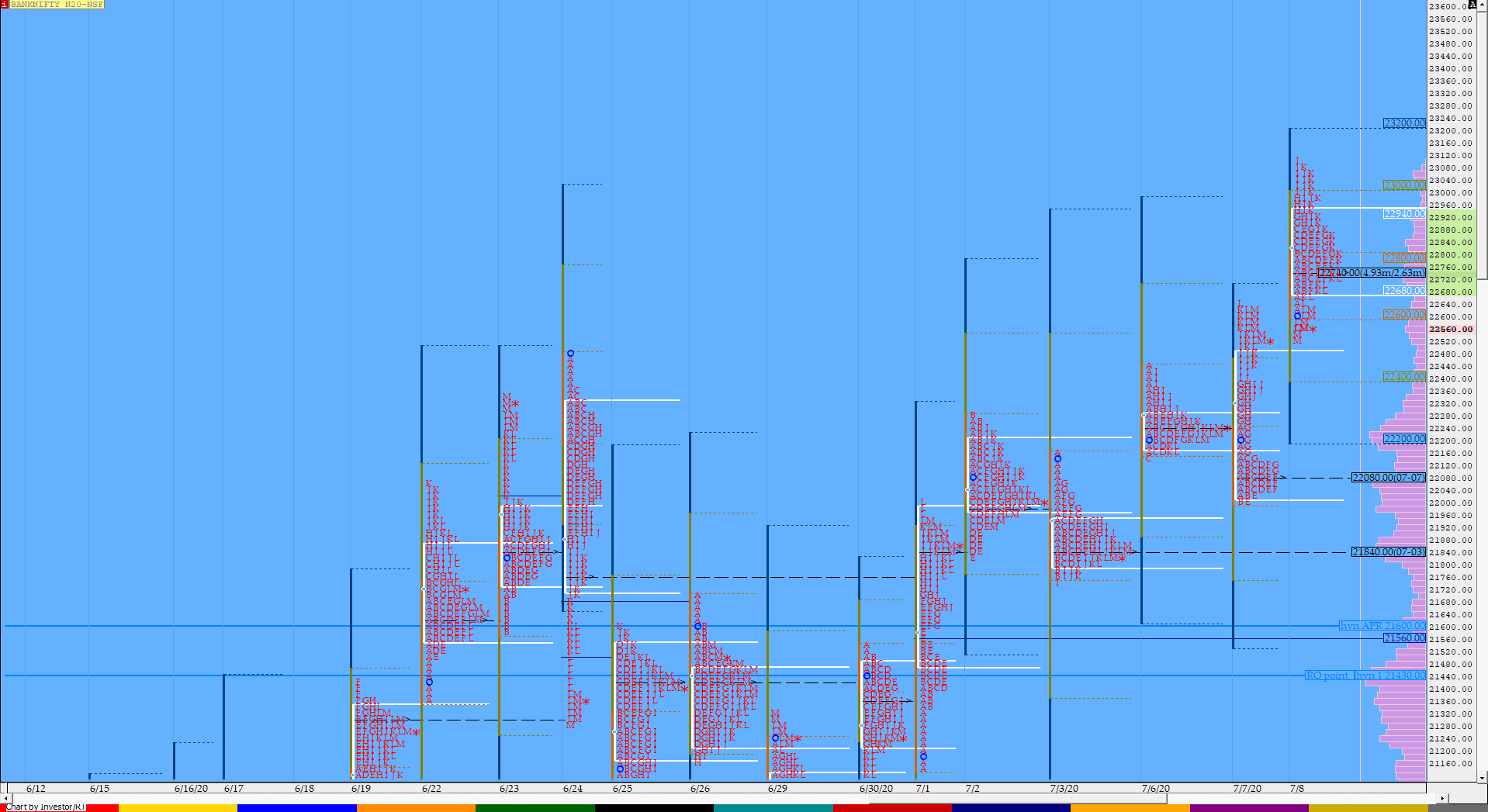 BNF also opened higher and was stronger of the 2 indicies as it remained above PDH (Previous Day High) and completed the 1 ATR target of 22708 from the FA of 22001 as it went on to make new highs of 22815 in the IB. The auction continied to probe higher giving a ‘C’ side RE where it made highs of 22880 after which it began to consolidate forming a balanced profile as it made similar highs in the ‘E’ period before completing the 1.5 IB objective of 22916 in the ‘G’ period and went on to make higher highs till the ‘J’ period as it hit 23118. However, this OTF (One Time Frame) move stopped in the ‘K’ period which turned out to be the biggest TPO in terms of range as it engulfed the entire day’s profile and this led to new lows being hit in the ‘L’ & ‘M’ periods as BNF also completed a Neutral Extreme profile. Value for the day was completely higher so acceptance above 22640 could bring a test of 22750 & 22880-940. Reference for the next open would be from 22615 to 22533.