NF opened with a gap up of 100 points and took support just above the yPOC of 9320 giving an OTD (Open Test Drive) as it scaled above PDH (Previous Day High) of 9369 and went on to tag 9443 in the ‘A’ period but could not make a new high in the ‘B’ period and in fact went on to break below VWAP which meant that the morning buyers had all booked out and as often happens, break of VWAP of a Drive Open leads to new lows which is what happened as NF made a OTF (One Time Frame) probe lower in the first half resulting in a RE (Range Extension) lower in the ‘E’ period as it hit 9301. The auction then stalled the OTF in the ‘F’ period and gave a retracement to VWAP in the ‘H’ period as it left a PBH at 9366 confirming that the PLR for the day was still to the downside. NF then initiated a fresh OTF move lower for the rest of the day as it made a fresh RE down in the ‘J’ period after which it left an extension handle at 9292 in the ‘I’ period and closed in a spike from 9265 to 9202 finally tagging that VPOC of 9204 and in the process completing the 80% Rule in previous week’s Value before closing the day at 9225 leaving an outside bar on daily with an overlapping POC at 9320. The May series has been in an balance since last Monday and the composite Value as of now is at 9225-9320-9384 with a low volume zone from 9225 to 9295 which could be the zone which could be filled in the coming session(s) before we get a fresh move away from here. However, the inability of NF to stay above 9215 could lead to more downside and a test of previous week low pf 9125 & the monthly POC of 9012. 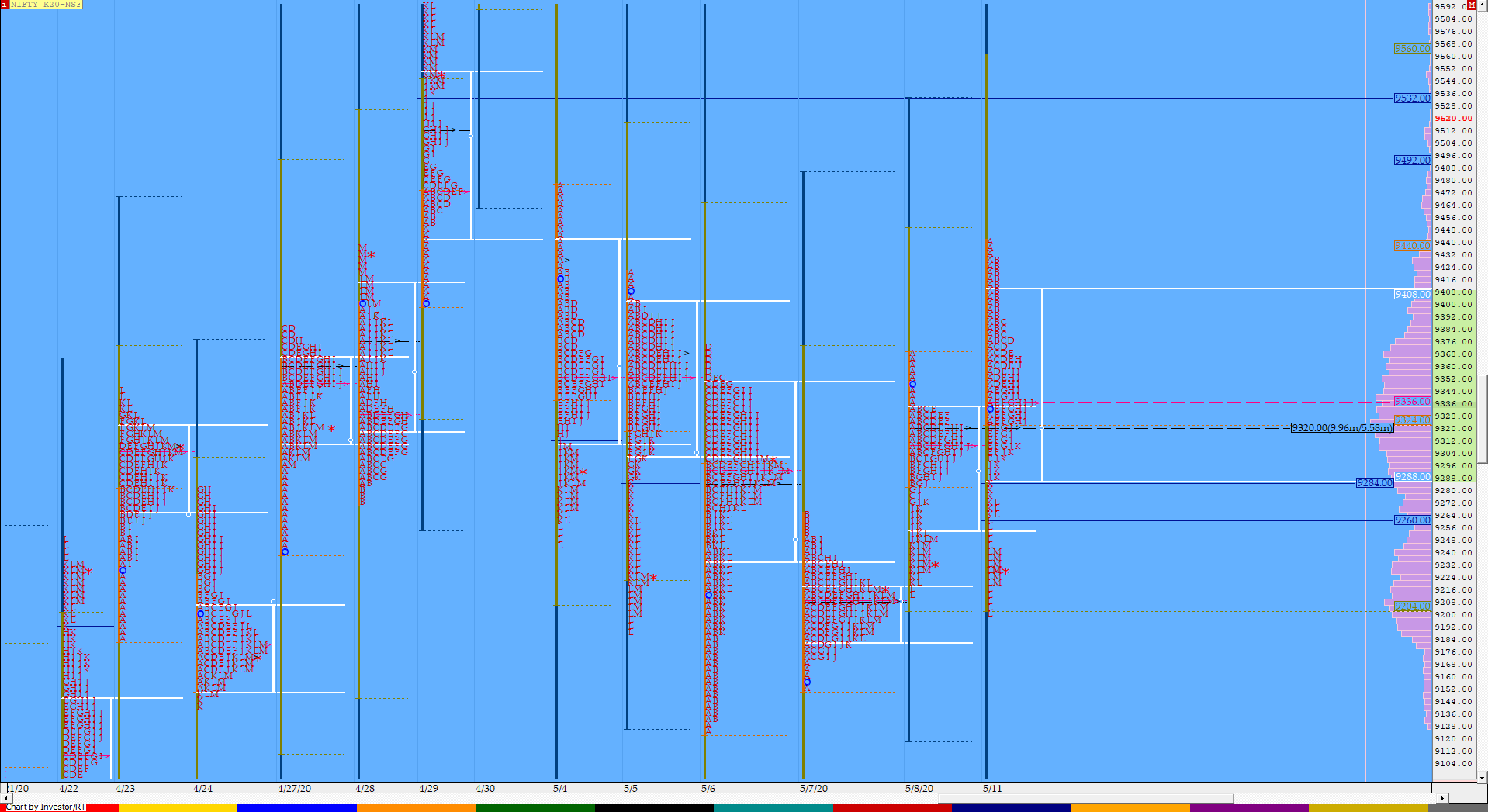 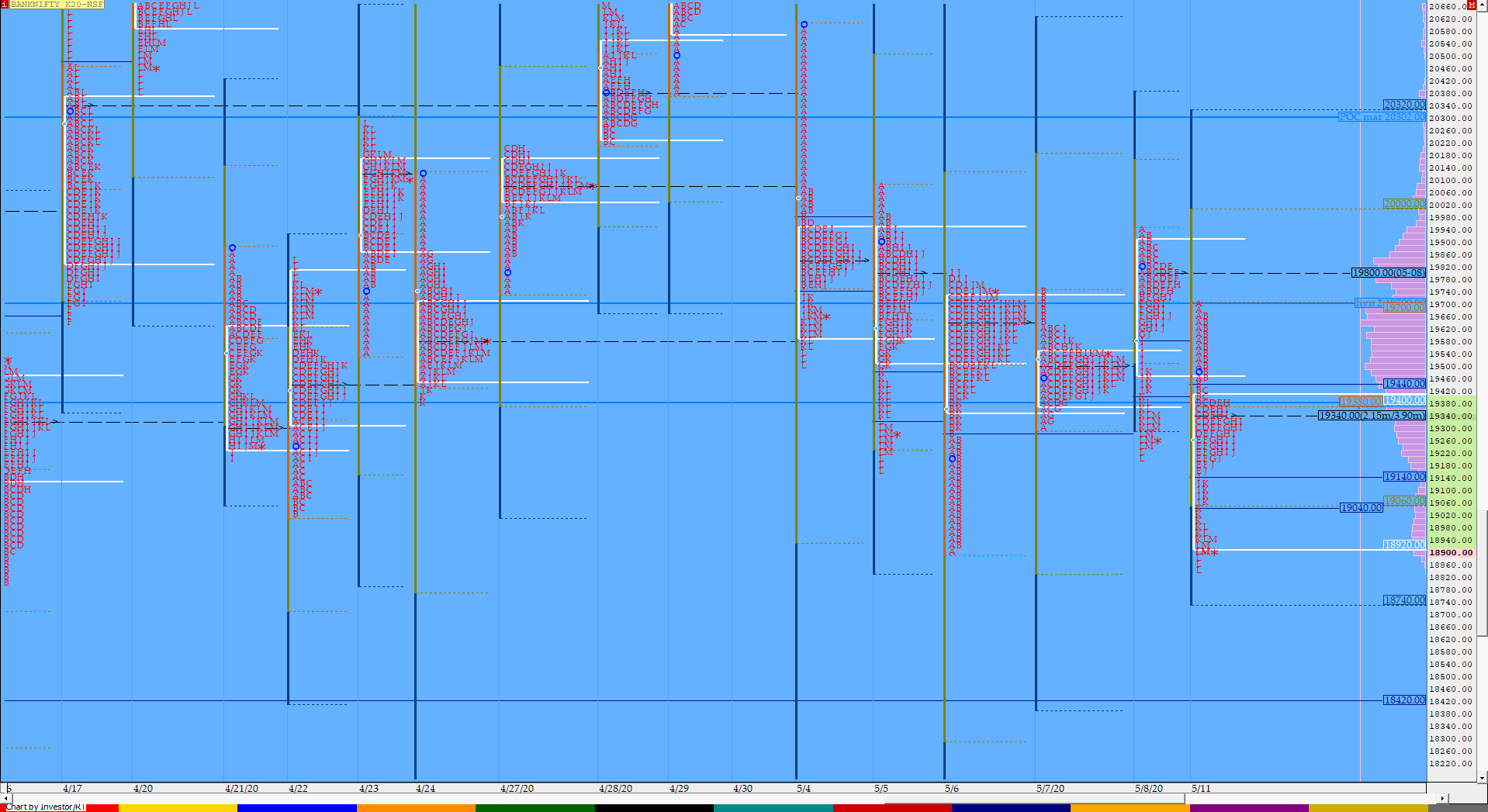 BNF also opened higher but was still in the low volume zone of the previous session as it probed higher taking out the extension handle of 19608 & even getting above Friday’s Trend Day VWAP of 19651 as it made highs of 19700 in the ‘A’ period. The stalling of the auction at this HVN and the inability to remain above 19651 led to a break below VWAP in the ‘B’ period as it left an extension handle at 19475 and this in turn gave a rare back to back Trend Day Down in BNF as it gave a OTF move lower all day making multiple REs on the downside along with the afternoon pull back in the ‘H’ period where it left a PBH at 19393 before resuming the OTF lower for the rest of the day leaving a second extension handle at 19163 before spiking into the close as it broke previous week lows of 18900 to hit 18855 in the ‘L’ period leaving a spike zone reference from 18855 to 19076 for the next open. The day was an outside bar which closed at 18914 but more importantly, BNF seems to be moving away from the previous week’s Value and a break below today’s low could lead to a test of the VPOC of 18300 in the coming sessions.