NF opened above the yPOC of 11025 with a OL (Open=Low) start at 11026 and drove higher though on low volumes to get above PDH (Previous Day High) and making a high of 11069 in the A period after which it made an inside bar in the B period while confirming a small buying tail from 11044 to 11025 in the IB (Initial Balance) which had a narrow range of just 43 points. (Click here to view the profile chart for September NF for better understanding) The auction then made multiple REs (Range Extension) to the upside over the next 3 periods as it finally tagged that FA of 11079 but as mentioned in yesterday’s report, this was a strong supply zone which needed big initiative volumes to be taken out which was missing as NF left a pull back high of 11085 in the ‘E’ period and gave a dip below VWAP in the ‘G’ period to tag 11048. There was another probe higher as NF got above VWAP and went on to make marginal new highs of 11088 in the ‘J’ period but once again got stalled indicating that the supply is still persisting and the failure of NF to even tag the 1.5 IB move led to a liquidation break in the last 3 periods as the auction made lows of 11045 taking support right at the morning tail to leave a nice balanced profile for the day and closing at the prominent POC of 11060. Value was once again higher for the day but the range contracted and in fact was the lowest in the past 2.5 months suggesting poor trade facilitation. NF needs to take out the vPOC of 11091 for more upside in the coming session(s) and has immediate support at 11040-25 below which it could get weaker for a visit to the vPOC of 10886. 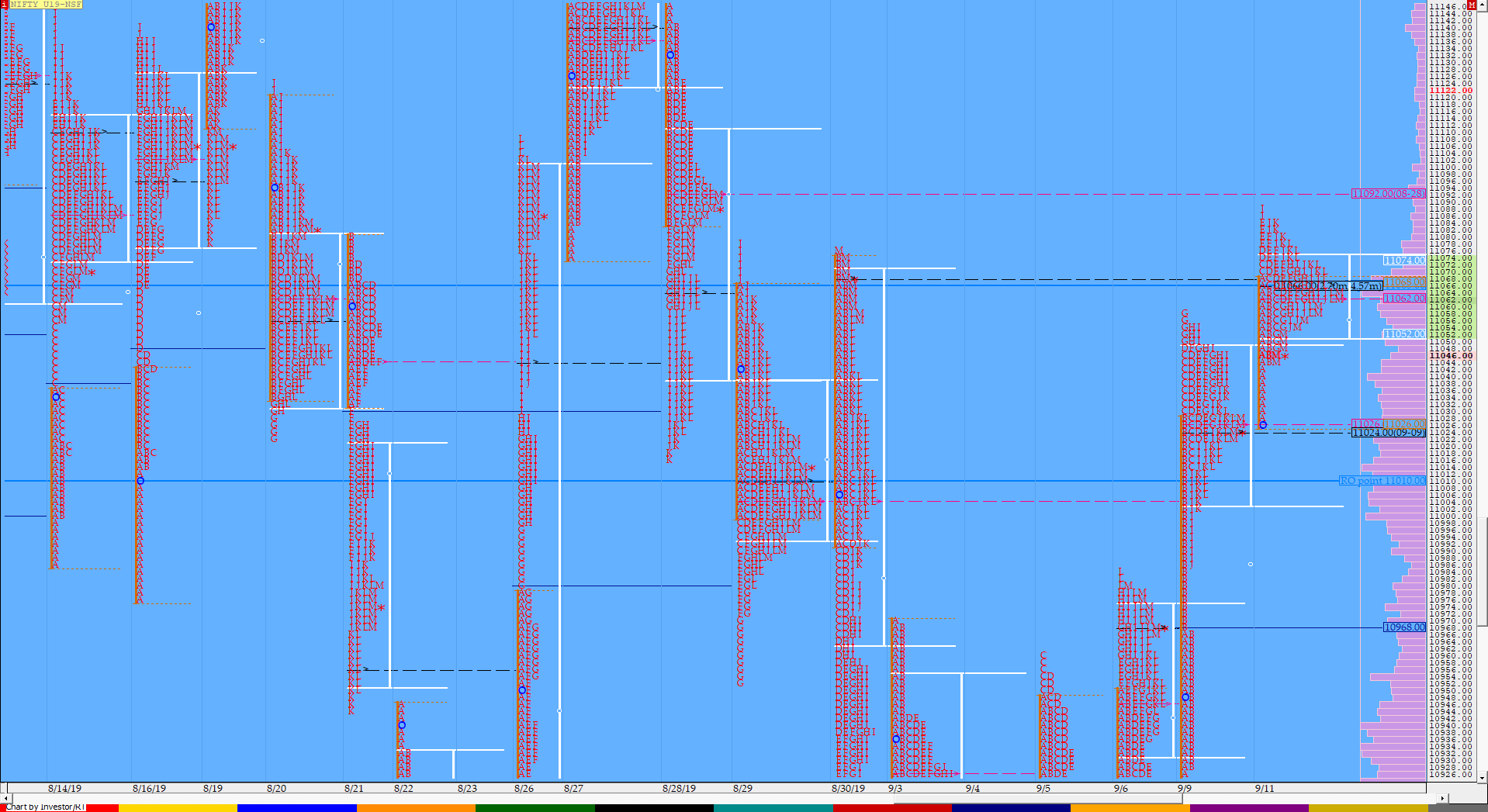 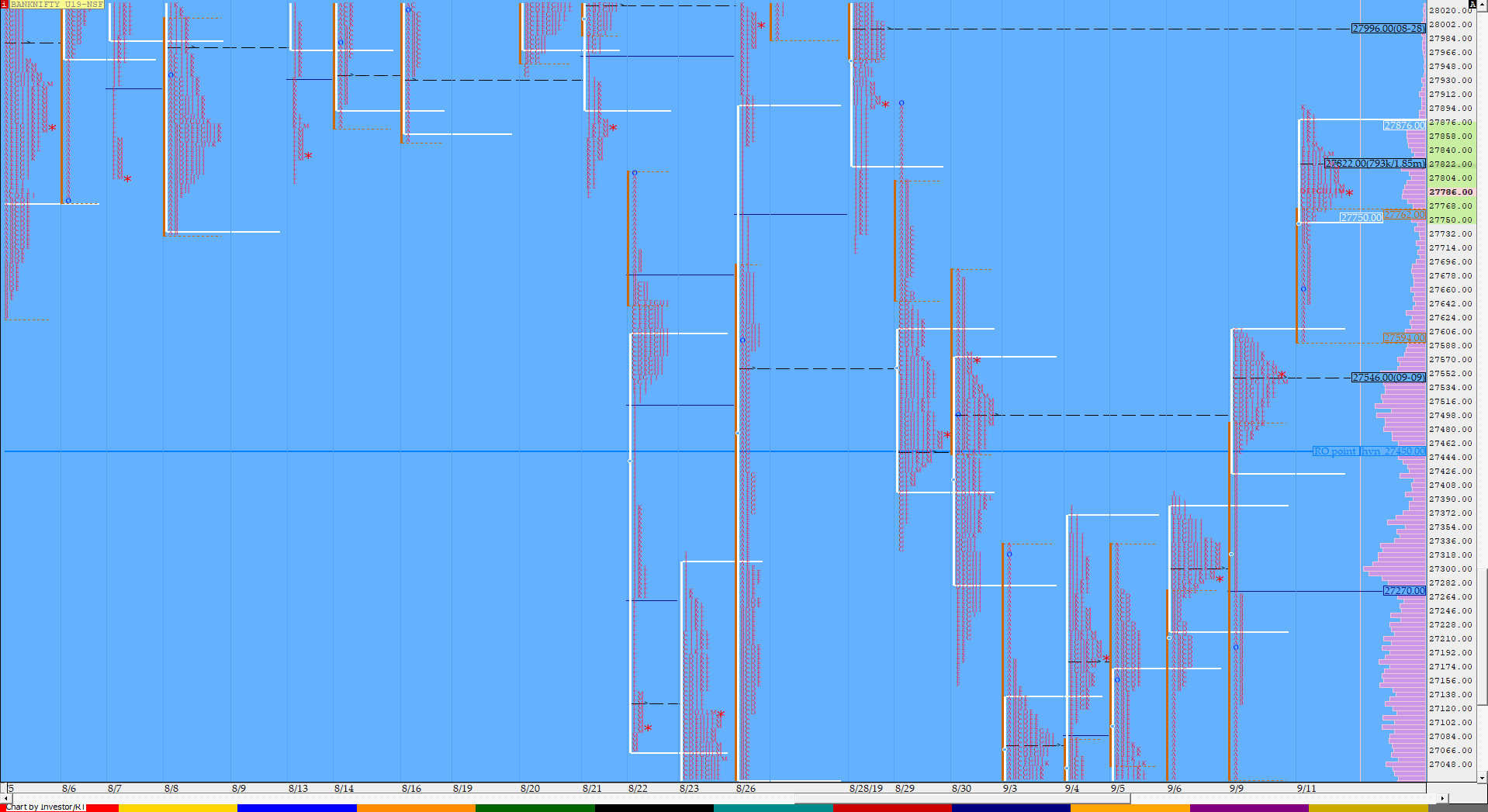 BNF opened with a gap up above PDH at 27681 and made a dip in the opening minutes as it briefly entered the previous day’s range but was rejected immediately leaving a low of 27594 which was a confirmation that the auction has not yet completed it’s probe to the upside. The auction then made a OTF (One Time Frame) move higher over the next 4 periods making multiple REs (Range Extension) as it made a high of 27843 in the ‘E’ period almost tagging the 1.5 IB after which it gave a dip to VWAP which was also coinciding with the IBH (Initial Balance High) as it left a pull back low of 27751 and resumed the probe higher as it went on to make fresh REs in the ‘J’ & ‘K’ periods where it made new highs of 27897 falling just short of the 2 IB objective. The last 2 periods saw another retracement to VWAP as BNF gave a dip of 100 points before closing around the developing POC of 27820 giving yet another ‘p’ shape profile with higher Value but contracting range of just 303 points which is the lowest in over a month. The PLR (Path of Least Resistance) however remains to the upside with immediate support in BNF at 27750 below which we have the buying tail from 27646 to the vPOC of 27550 as reference points in the coming session(s).