Previous day’s report ended with this ‘Value for the day was completely higher but the inability to tag the VPOC of 12189 suggests that the supply is back and NF would need to take out that HVN of 12165 for a fresh probe higher towards 12189 & 12230.‘

NF for the second consecutive day opened with a gap up forcing the supply which came at 12165 yesterday to cover and this triggered a Open Test Drive on low volumes as the auction probed higher for the first 3 periods which meant it gave a C side RE (Range Extension) as it not only tagged the first VPOC of 12189 but went on to tag the next VPOC of 12230 above it too as it marked highs of 12234. The lack of fresh buying was evident as the volumes died down and NF remained stuck in a narrow range of just 30 points for the next 6 periods as it stayed above VWAP making similar lows near 12206 in the F, I & J periods indicating exhausion in the probe down indicating that there was no big supply coming in and it was only locals who were present in the market. The ‘J’ period then made a fresh RE to the upside mostly causing the weak shorts to cover as NF made new highs of 12244 and made another marignal new high of 12247 in the ‘L’ period but was swiftly rejected which meant fresh supply was coming in at the same place where it had left poor highs on 27th Jan and caused NF to close near the DPOC of 12218 leaving a perfect ‘p’ shape profile for the day. The HVN of 12218 would be the important reference for the next open and would require initiative buy side volumes to continue making higher Value this week towards the next VPOC of 12282 & 12309. Acceptance below 12218 could lead to a test of the today’s buying tail which starts from 12201 for a test of the HVNs of 12165 & 12130. 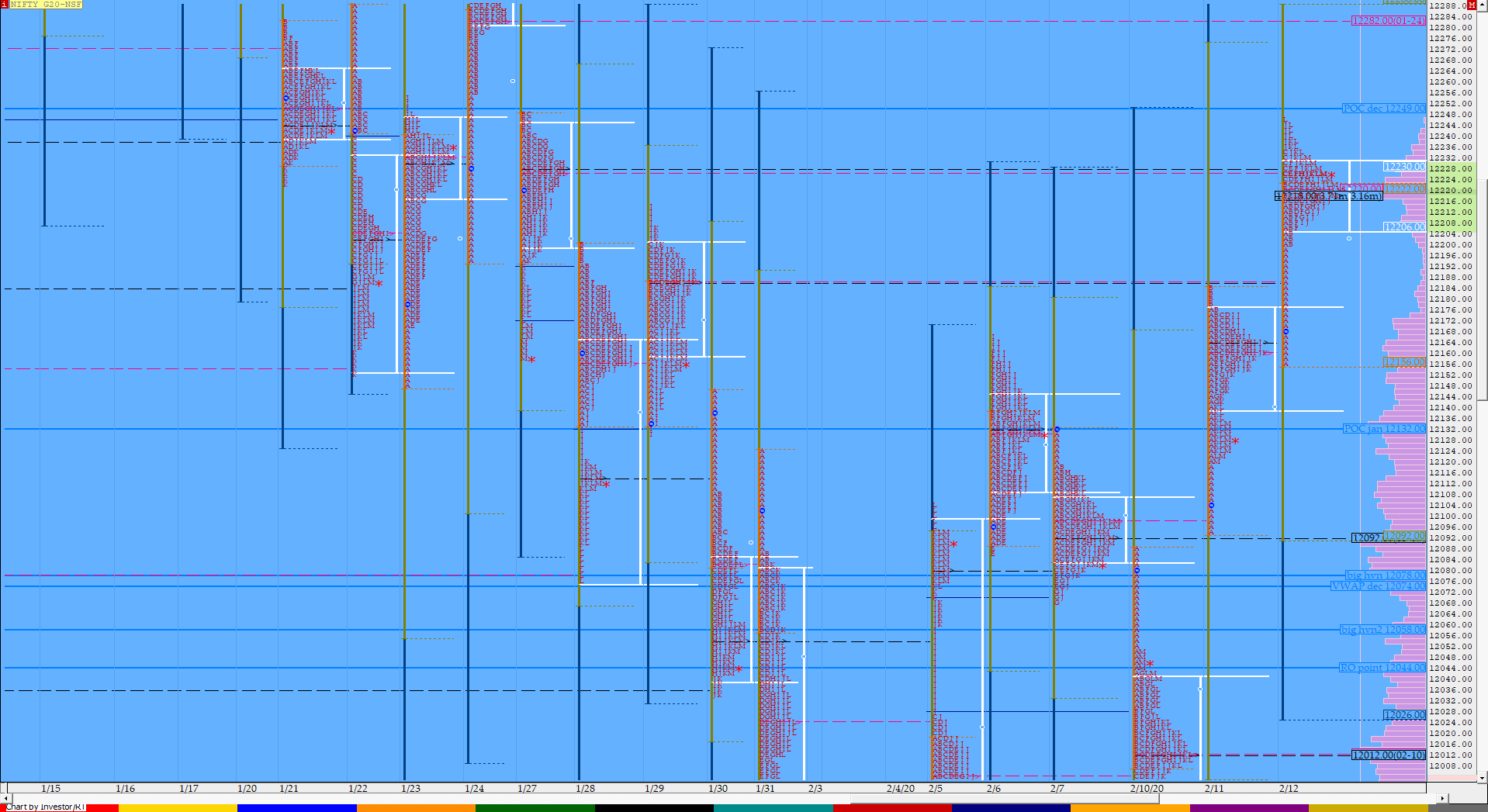 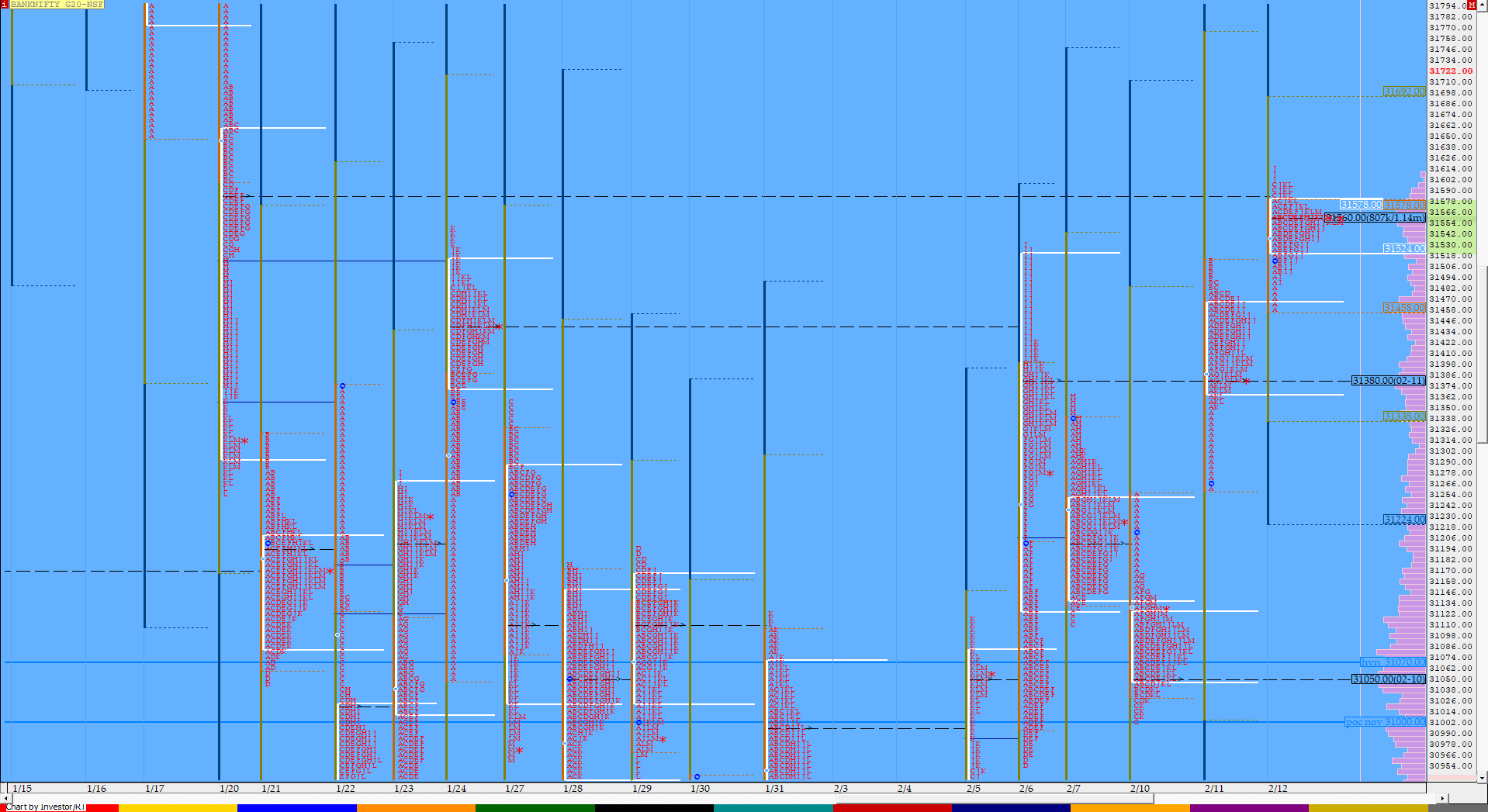 BNF also opened with a big gap up above the previous day HVNs of 31385 & 31460 and finally got accepted above the 20th Jan Trend Day VWAP of 31500 as it made a quick dash to 31579 in the IB (Initial Balance) leaving a very narrow range of just 121 points. The auction then made the dreaded C side extension as it tagged the VPOC of 31584 but got repeatedly stalled at 31599 just below the extension handle of the 20th Jan Trend Day which was at 31605. BNF then stayed in the narrow IB range for most part of the day making a slow probe lower as it tested the morning buying tail of 31505 to 31458 and took support there leaving a PBL (Pull Back Low) of 31492 in the ‘I’ period which led to a fresh short covering move in the ‘J’ period leading to a new RE to the upside as the auction hit 31620 but once again was not able to sustain above 31605 indicating supply coming back in this zone as it closed the day at the dPOC of 31560 leaving a nice Gaussian profile for the day with one of the lowest daily range along with volumes which means poor trade facilitation. BNF has major supply on the upside above 31620 in the form of the big selling tail from 31708 to 31893 which would need some initiative activity to be taken out and on the downside, the HVNs of 31460 & 31385 would be the levels to watch out for in case the auction gets accepted below 31560 in the coming session(s).