The start of a new imbalance generally happens with an initiative move away from the composite POC which was not to be in NF as it opened with a gap up and probed higher on low volumes as it stayed above PDH (Previous Day Range) to make new high for the series at 10863 in the IB leaving yet another narrow range of just 41 points which suggested poor trade facilitation as the auction was looking for fresh volumes. NF then made a ‘D’ side RE (Range Extension) and even got accepted above the IB for most part but failed to tag the 1.5 IB objective of 10882 which meant lack of new demand and this in turn triggered a move back not just into the IB but also resulted in a RE lower confirming a FA at 10879. The auction then trended lower till the ‘J’ period as it got back into the weekly composite and went on to tag the prominent POC of 10752 while making a low of 10749 where it took support. This was an important sign and also marked the lows of the day as NF left a small buying tail which meant that the buyers were defending this zone which led to a retracement back to VWAP into the close with the DPOC also shifting lower to 10810 where the day closed leaving a perfect Neutral Centre profile with small tails at both ends & a close right at the centre where both the DPOC & VWAP were overlapping. 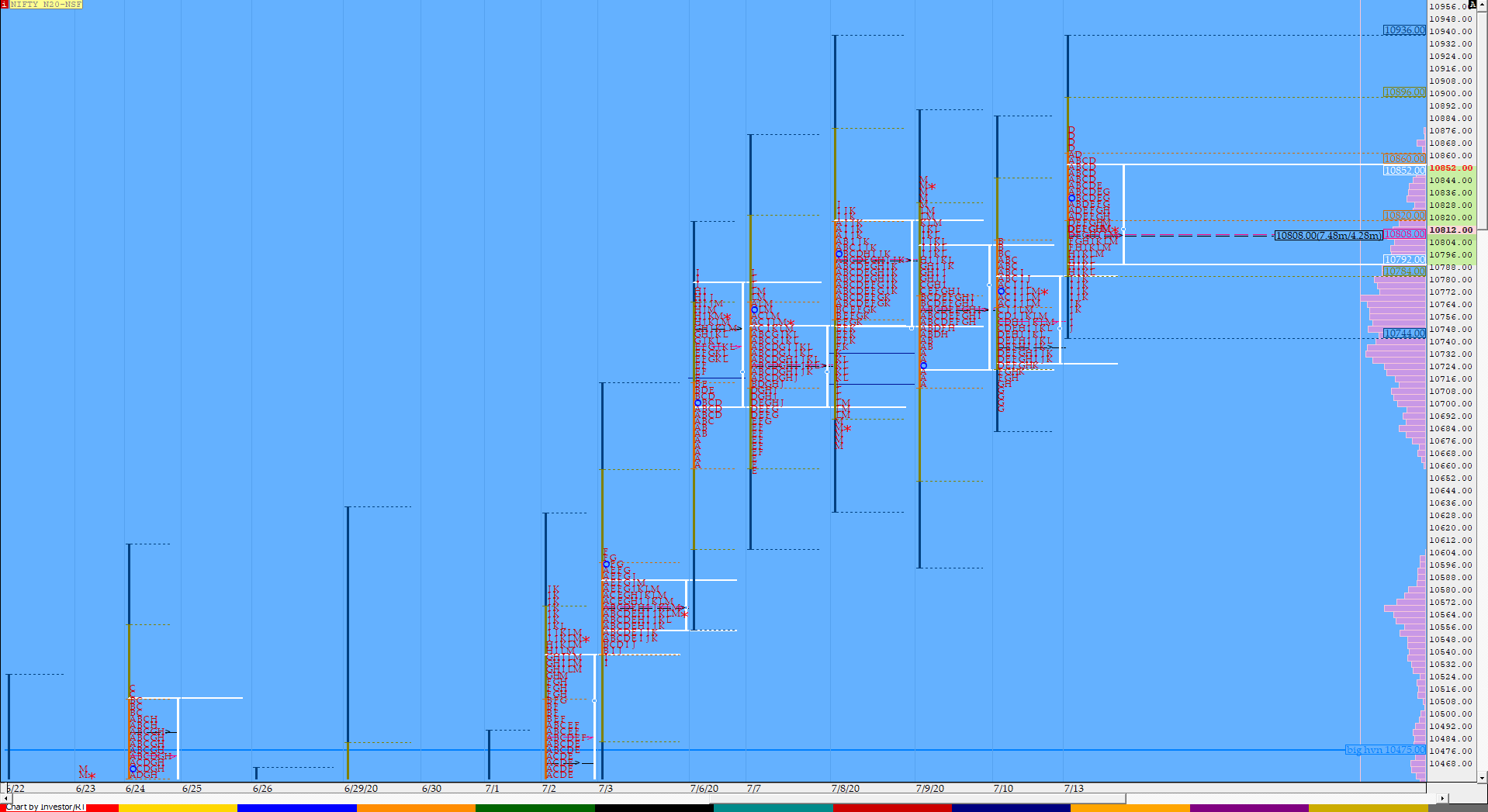 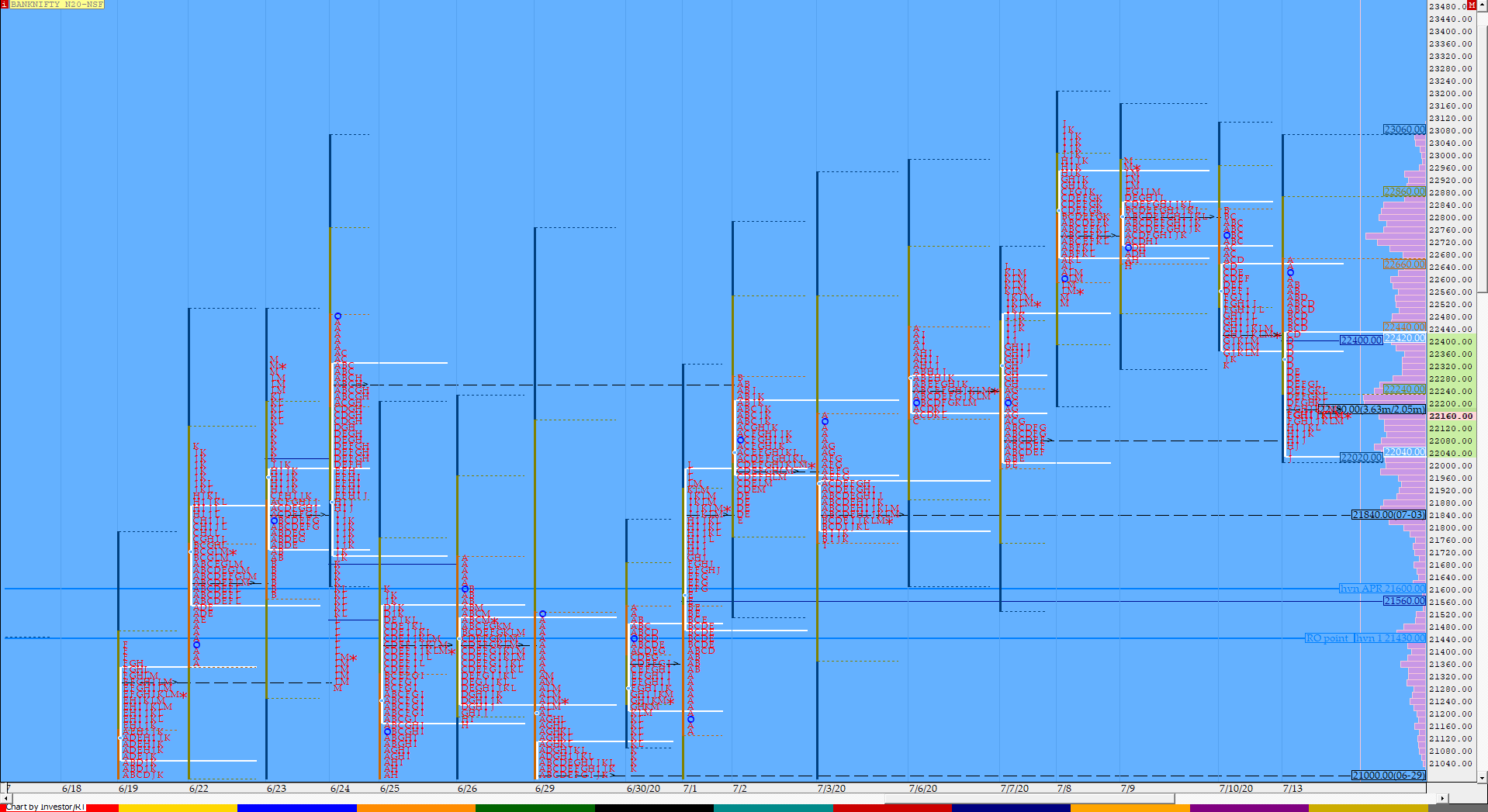 Previous day’s report ended with this ‘The profile represents long liquidation with completely lower Value so staying below 22400 in the coming session could see more downside towards the weekly VPOC of 21840 zone with the HVN at 22241 & VPOC at 22080 being minor support levels. On the upside, BNF has supply points at 22572 & 22675 which will be on watch on the ability to sustain above 22400‘

BNF also opened higher but stayed within previous day’s range and got rejected in an attempt to probe above yVAH as it got rejected at 22664 just below the supply point of 22675 in the IB which indicated that the sellers were very much active. The auction however remained above yPOC of 22400 as it formed a nice balance in a narrow range after it made a C side RE lower which got rejected at 22430. However, BNF could not scale above VWAP from the failed C side set up and this rejection from VWAP along with a small initiative selling tail at top led to an initiative move lower in the ‘D’ period in the form of an extension handle at 22430 as the auction trended lower to break the HVN of 22241 & the VPOC of 22080 as it almost completed the 3 IB objective of 22026 by making a low of 22028 in the ‘J’ period. The completion of 3 IB plus the presence of last week’s swing low of 22001 marked the end of the probe lower for the day as BNF formed a balance in the lower part of the day’s profile with a close at the bulkier looking POC at 22180 leaving a Double Distribution Trend Day down with lower Value once again. The PLR remains down if the auction stays below this POC in the next session for a probe to 22001 / 21840 & 21545 and on the upside acceptance above 22180 could lead to the test of the extension handle of 22430 which was the level where we got initiative selling today.