NF opened with a big gap up of 179 points and stayed above the PDH (Previous Day High) in the ‘A’ period which led to a fresh probe higher in the ‘B’ period of exactly 100 points as it made highs of 9265 following it up with a ‘C’ side RE resulting in marginal new highs of 9274. The auction made another RE attempt in the ‘D’ period making new highs of 9282 but once again it was not able to sustain above IBH which indicated that the upside was getting limited. NF then formed a nice balance inside the IB range till the ‘G’ period with a prominent TPO POC at 9222 and this balance then led to a big imbalance to the downside from the ‘H’ period onwards where it left an extension handle of 9131 to start with confirming a FA at highs and followed it up with another extension handle at 9095 in the ‘I’ period which took the auction inside the Value of the 2-day composite as it completed the 80% Rule from 9060 to 8949 in the ‘J’ period and went on to make lower lows of 8847 in the ‘K’ period completing the 3 IB objective of 8863 marking the end of this imbalance. NF left a tail from 8847 to 8896 at lows as it made a retracement to 8955 and saw big volumes coming in at 8937 which was mostly the shorts booking out as the DPOC also shifted lower to this point and even the day closed here. Though today’s profile has a big zone of singles from 8955 to 9095 which would be the immediate reference on the upside, NF continues to remain in a balance after today’s failed attempt to move away on the upside and has a composite POC at 9015 which would be an important reference for the rest of the series.

Click here to view the 3-day composite on MPLite 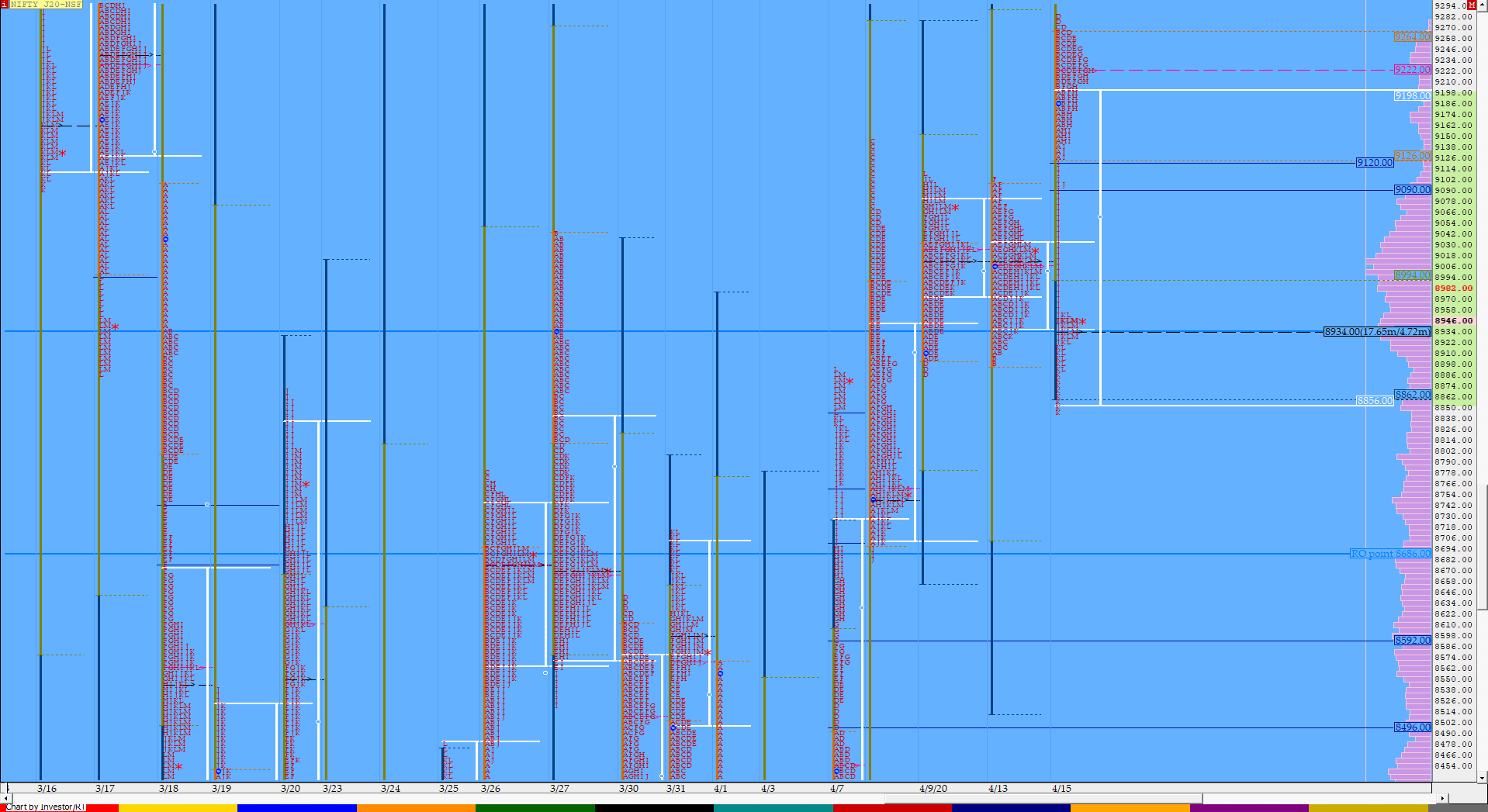 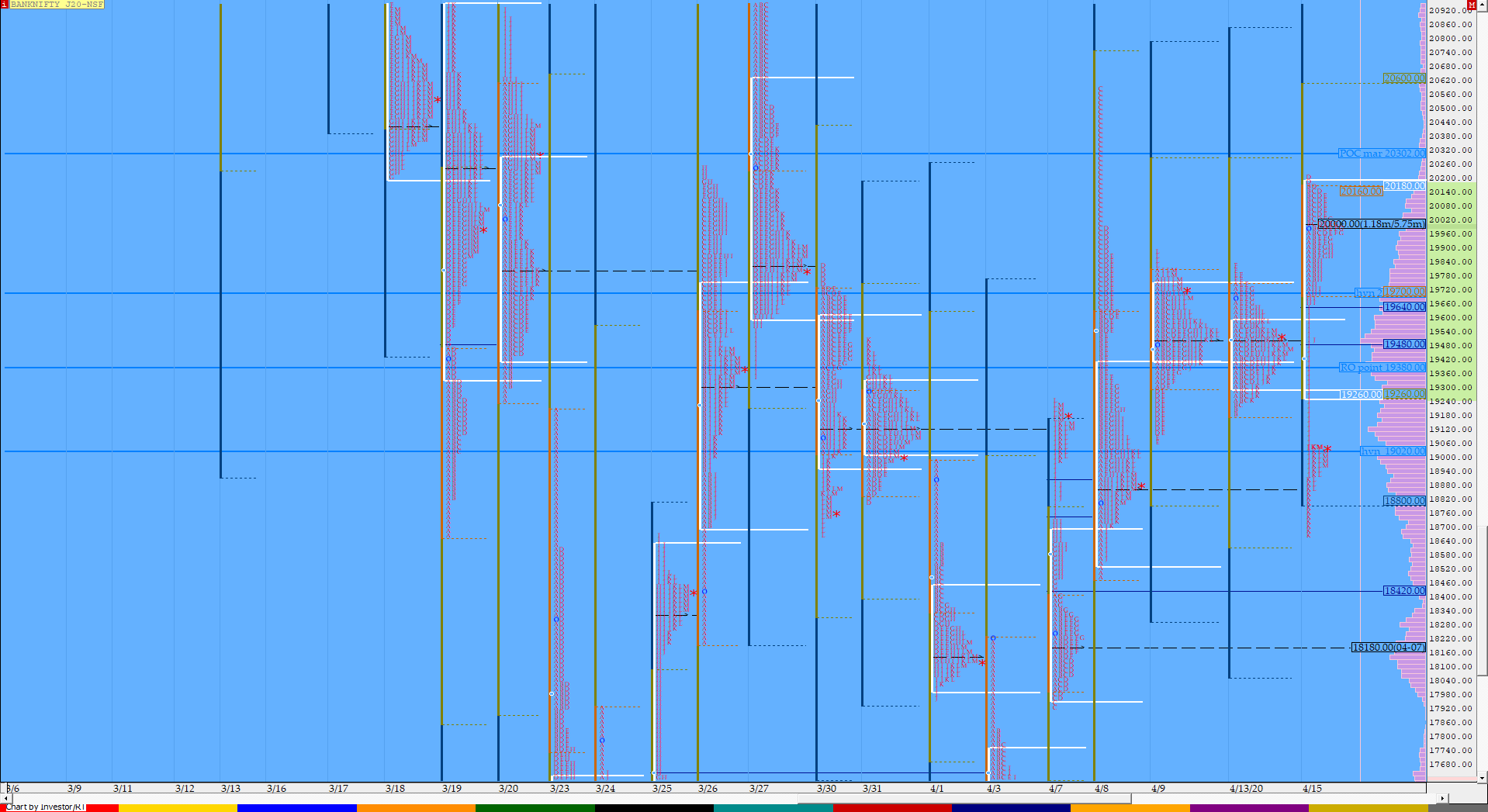 BNF opened with a gap up of 500 points and took support just above the compostite VAH of 19666 as it made a low of 19711 in the ‘A’ period after which it probed higher making new highs of 20172 for the day as the IB got over leaving a relatively small range of 461 points for the first hour which was the second lowest of this series giving the scope for a multiple IB day shaping up. The ‘C’ period then made an inside bar but stayed above VWAP which meant that the PLR (Path of Least Resistance) was to the upside and the auction made an attempt to get above the IBH as soon as the ‘D’ period began as it made new highs of 20217 but was immediately rejected giving the first sign that the PLR could be changing. BNF then remained inside the IB making a nice balance in the narrow range typical of the first half of an OAOR day till the ‘G’ period after which it made an RE to the downside in the ‘H’ period confirming a FA (Failed Auction) at 20217 as it made new lows of 19665 which was the composite VAH to the dot. Fueled by the FA at top, the auction then changed gears in the ‘I’ period as it left an extension handle at 19665 and completed the 80% Rule in the 2-day composite Value of 19666 to 19350 in a flash as it trended lower till the ‘K’ period where it not only completed the 3IB target of 18789 but went on to make lows of 18661 completing the 1 ATR objective from the FA in just 3 TPOs. BNF then formed a mini balance while building volumes at 18970 closed around it confirming a tail at lows from 18875 to 18661 which would be the immediate reference on the downside. On the upside, we have a big zone of singles from 19048 to 19512 which would be the zone to watch. The auction failed to move away from the balance of last 2 days on the upside and is now forming a balance on the higher 4-day scale which has a prominent POC at 19500 and the MPLite chart of the same can be viewed here.