NF opened near the yPOC of 8937 but could not get into the singles of 8955 to 9095 on the upside and probed lower as it broke below PDL (Previous Day Low) making new lows for the week at 8835 but was swiftly rejected confirming an ORR (Open Rejection Reverse) after which it probed higher getting into the zone of singles as it tagged 8980 in the ‘A’ period. The ‘B’ period was an inside bar but more importantly confirmed a buying tail from 8884 to 8835 and considering that the previous day was a 3 IB one, the PLR for the day seemed to be up. The auction then made the dreaded C-side extension as it made new highs of 8986 where it faced immediate rejection and played out the retracement to VWAP where it was defended leaving the first of the many PBLs (Pull Back Low) at 8912. NF then made a fresh RE (Range Extension) in the ‘E’ period leading to higher highs being formed for the next 4 periods with the second PBL of 8972 being confirmed in the ‘F’ period as it made highs of 9074 in ‘I’. The auction then made a quite inside bar in the ‘J’ period and made another new RE higher as it hit 9089 but got stalled just below the important supply zone of 9095 marking the end of the upside probe for the day. NF then made a sharp retracement in the ‘L’ period to VWAP as it left another probable PBL at 9001 and was defended indicating that the initiative buyers of the open are still present. The day closed at 9035 with the HVN for this week shifting from 9015 to 9051 & will be the immediate reference for the next open. On the larger time frame, NF continued to build on the balance it was forming since 3 days and the updated composite has Value at 8910-9050-9070 (Click here to view the MPLite chart of the same) from where we can expect a drive away in the coming session(s). 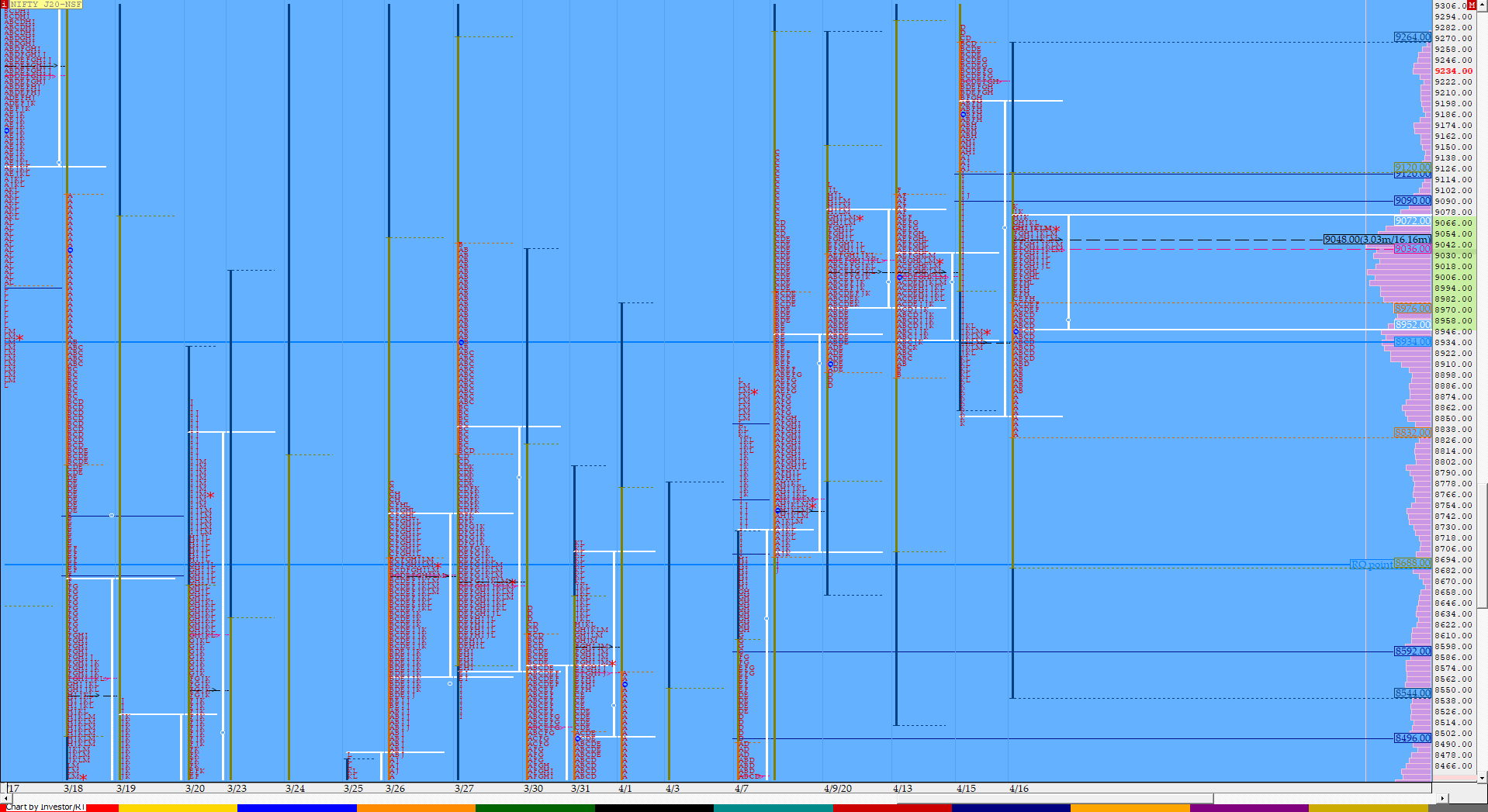 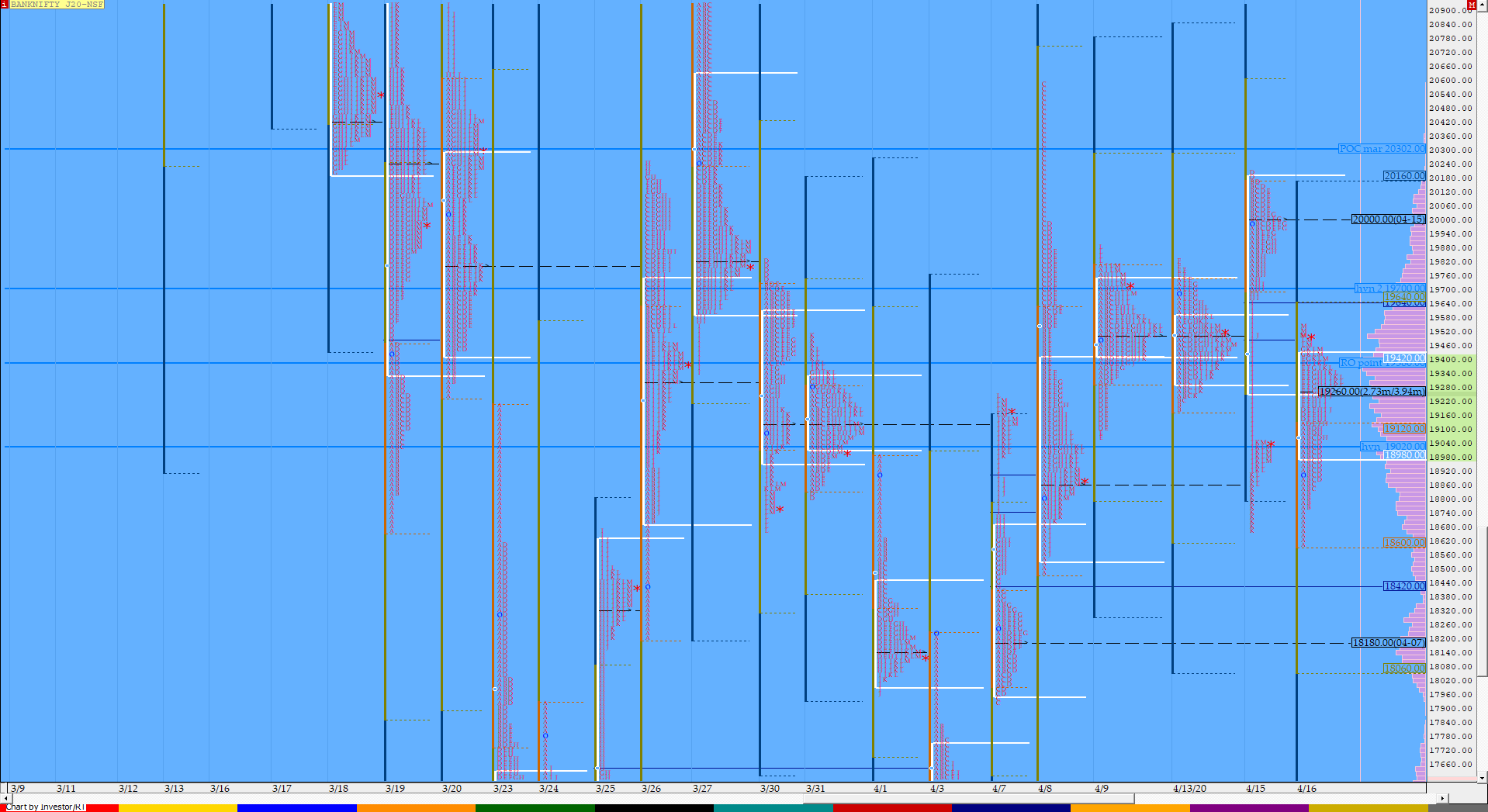 BNF made an OH (Open=High) start at 18905 and probed lower as it made a freak low of 18601 in the opening minutes but was immediately sent back above PDL which led not only to a test of the OH level but the auction went on to enter into the singles of 19049 to 19512 as it made highs of 19134 in the ‘A’ period. The next 2 periods saw coiling as the range contracted but as had happened in NF, there was a buying tail from 18770 to 18601 which meant that the PLR was to the upside. BNF then made a successful RE in the ‘D’ period following it up with a higher high of 19400 in the ‘E’ period completing the 1.5 IB objective and after making an inside bar in ‘F’, it made the 3rd RE in the ‘G’ period to hit 19452 where it got stalled leading to a big retracement in the ‘H’ period as it went below VWAP but found fresh demand there and went on to confirm a PBL at 19063. The auction then made a slow probe higher for the rest of the day and even went on to spike into the close as it tagged that prominent POC of 19500 while making new highs of 19555 before closing the day at 19426. BNF has also been forming a composite over the last few days & the 5-day balance now has Value from 18990-19383-19873 and an initiative move from the 19400 zone in the coming session could signal start of an imbalance. (Click here to view the MPLite chart of the 5-day composite)