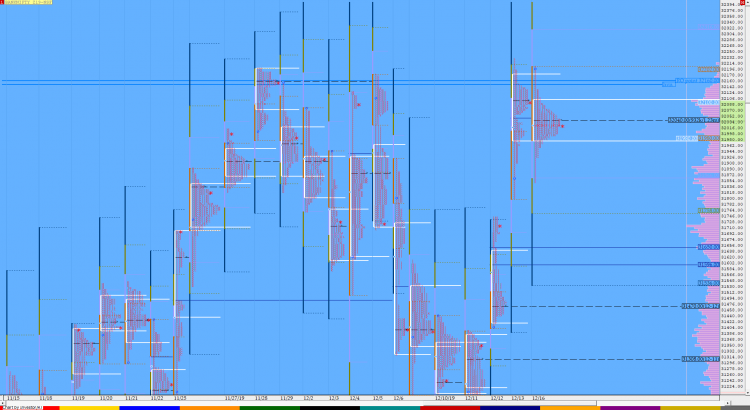 NF gave a OH start to the day at 12152 and once again failed to get above the RO point of 12153 which triggered a probe lower in the ‘A’ period as the auction went on to break below the PBL of 12121 & Friday’s VWAP of 12114 while making lows of 12102 which indicated that the supply was more aggressive than the demand. NF made a narrow range inside bar of just 24 points in the ‘B’ period confirming a selling tail from 12125 to 12152 in the IB as balance returned after the imbalance of last 3 days from 11872 and the next 3 periods also remained inside the range of ‘B’. There was finally a RE (Range Extension) in the ‘F’ period as the auction broke below IBL followed by another one in the ‘G’ period as it made a low of 12088 tagging the first PBL (Pull Back Low) of Friday which was at 12090 and gave a swift rejection which led to a retracement higher over the next 2 periods as NF scaled above VWAP and went on to test the morning selling tail as it left a PBH of 12133 indicating that the morning supply was still active in this zone. The probe then turned lower for the rest of the day as NF gave a spike close from 12088 to 12074 leaving an inside bar for the day both in terms of Range & Value along with a prominent POC at 12112 which would be the level to watch in the next session above the spike high of 12088.

Click here to watch the 2-day composite in NF 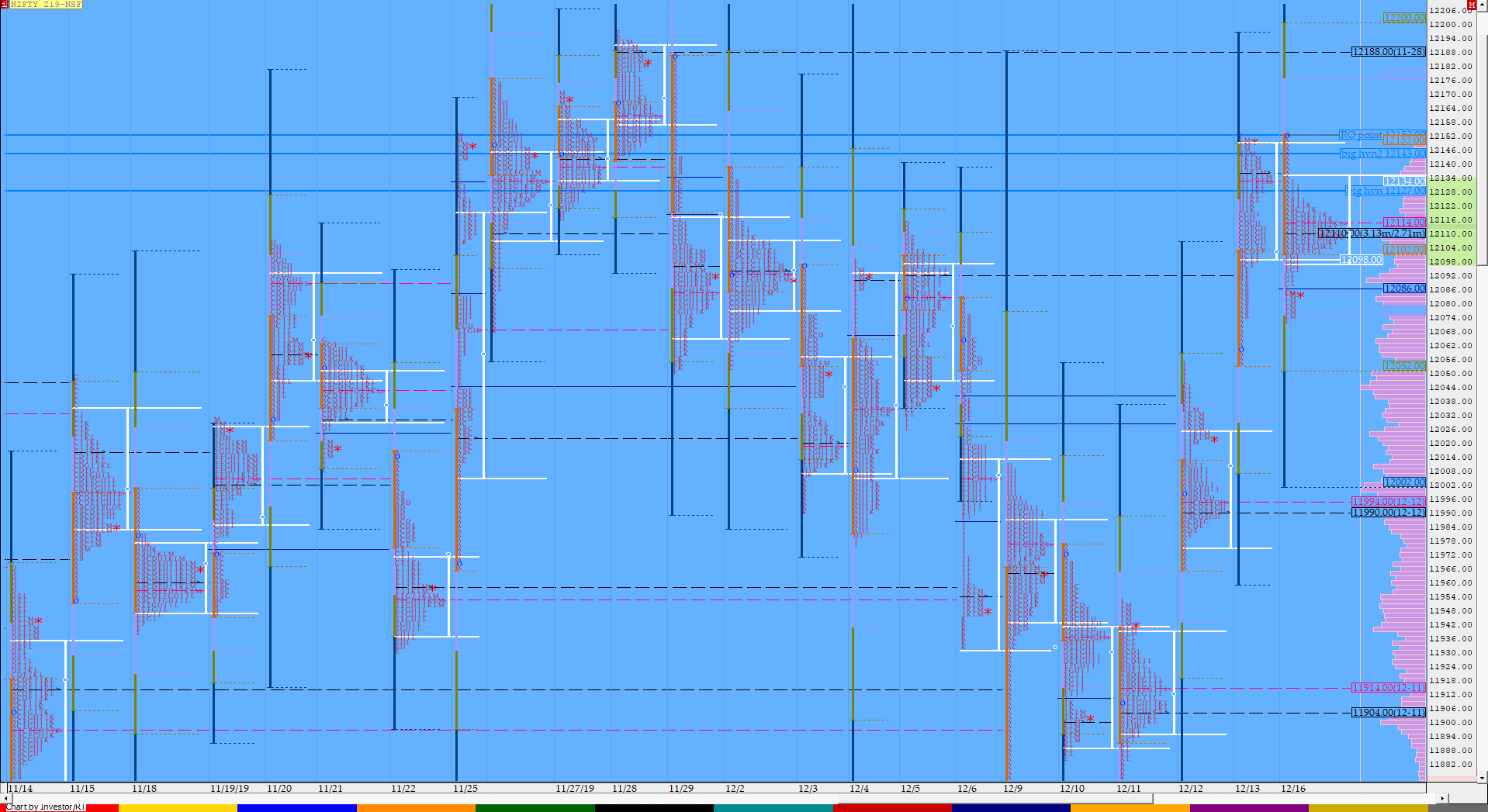 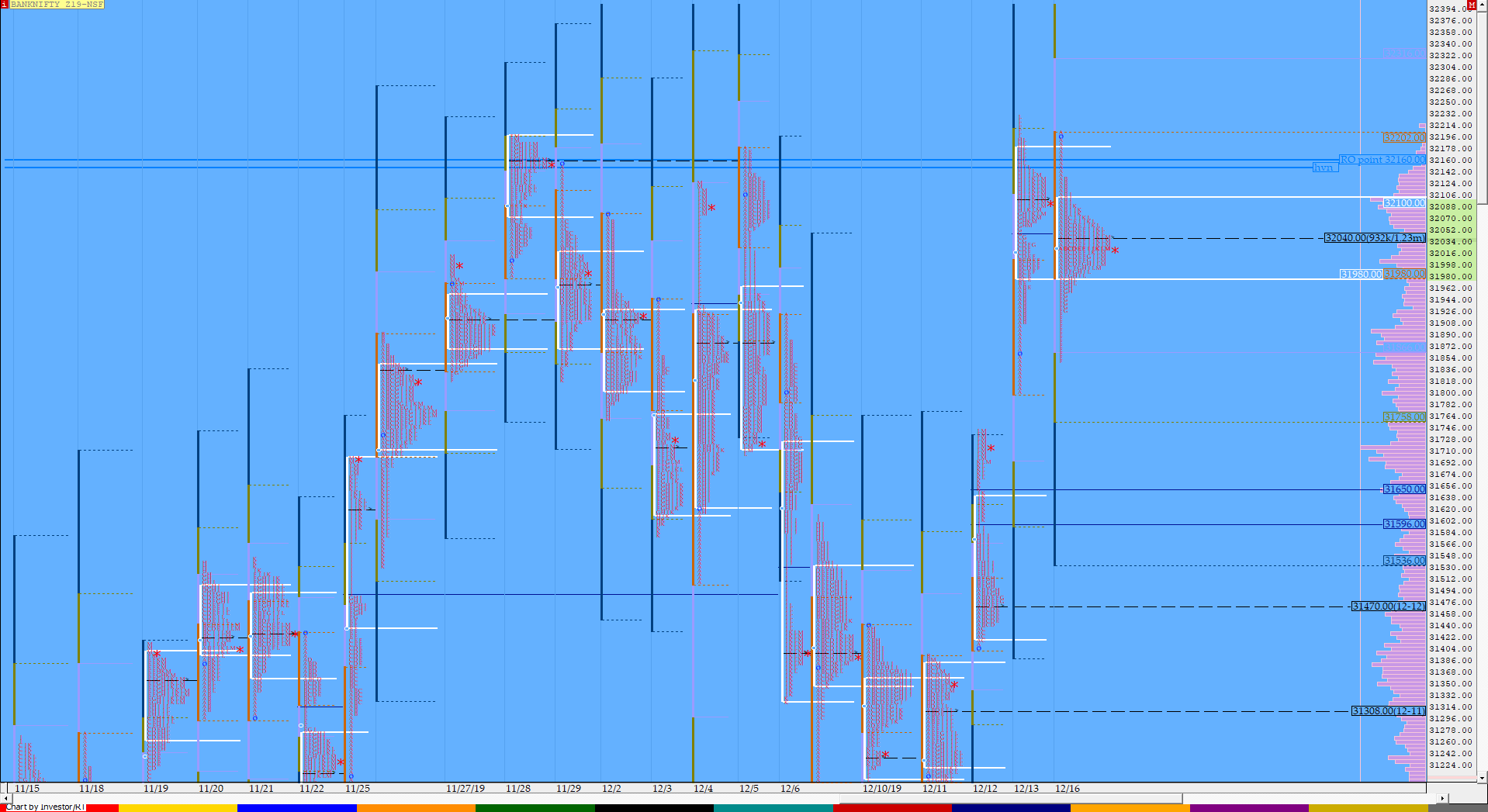 BNF opened higher but got rejected from the selling tail of 32195 to 32230 & drove lower in the ‘A’ period and similar to NF, broke below the Friday’s POC & VWAP of 32100 & 32057 leading to a sharp probe lower as it made lows of 31982 after which it made an inside bar in the ‘B’ period where it also confirmed a selling tail in the day’s profile from 32130 to 32205. The next 3 periods stayed inside the range of ‘B’ coiling around the VWAP which led to a meltdown in the ‘F’ period as the auction broke below IBL and made a spike down to 31848 completing the 1.5 IB extension where it got rejected and left a buying tail till 31927 as it got back to test the yPOC of 32100 forming a balanced profile on the daily with tails at both ends (3-1-3 profile) with a prominent POC at 32040. The Range & Value were both inside the previous day’s levels thus forming a nice 2-day composite from where we can expect the auction to give a move away in the coming session(s).

Click here to watch the 2-day composite in BNF