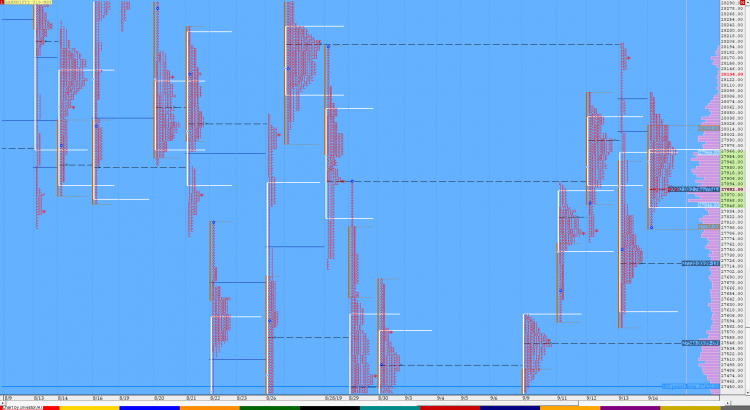 NF opened with a big gap down of 100 points well below the spike reference of 11075 to 11118 and also negated the extension handle of 11045 but could not extend lower as it made a low of 11001 in the ‘A’ period after which it probed higher making a high of 11052 in the IB (Initial Balance) giving a rather small range of 51 points. (Click here to view the profile chart for September NF for better understanding) The auction then got above ‘B’ period highs in the ‘C’ period but could not extend the IB range which it did in the ‘D’ period as NF went on to tag the spike reference low of 11075 as it made a high of 11079 completing the 1.5 IB extension but could not sustain above it indicating that the auction is being rejected from the spike. The ‘E’ period saw another attempt to probe higher but could only make a marginal lower high of 11076 confirming that the upside probe is getting exhausted & that there is not enough demand for NF to gain acceptance in the spike zone of the previous session. This led to a big move in the opposite direction as the auction One Time Framed (OTF) lower for the next 4 periods and in the process made a RE (Range Extension) to the downside in the ‘H’ period and followed it up with a lower low in the ‘I’ period as it tagged 10982. The OTF move down came to an end in the ‘J’ period as NF made a higher high and went on to get above VWAP to leave a PBH (Pull Back High) at 11040 in the ‘K’ period before closing around the VWAP & dPOC of 11027 leaving an inside bar on daily both in terms of range & Value plus a well balanced Neutral Centre profile and is likely to give a good move away from here in the next session. 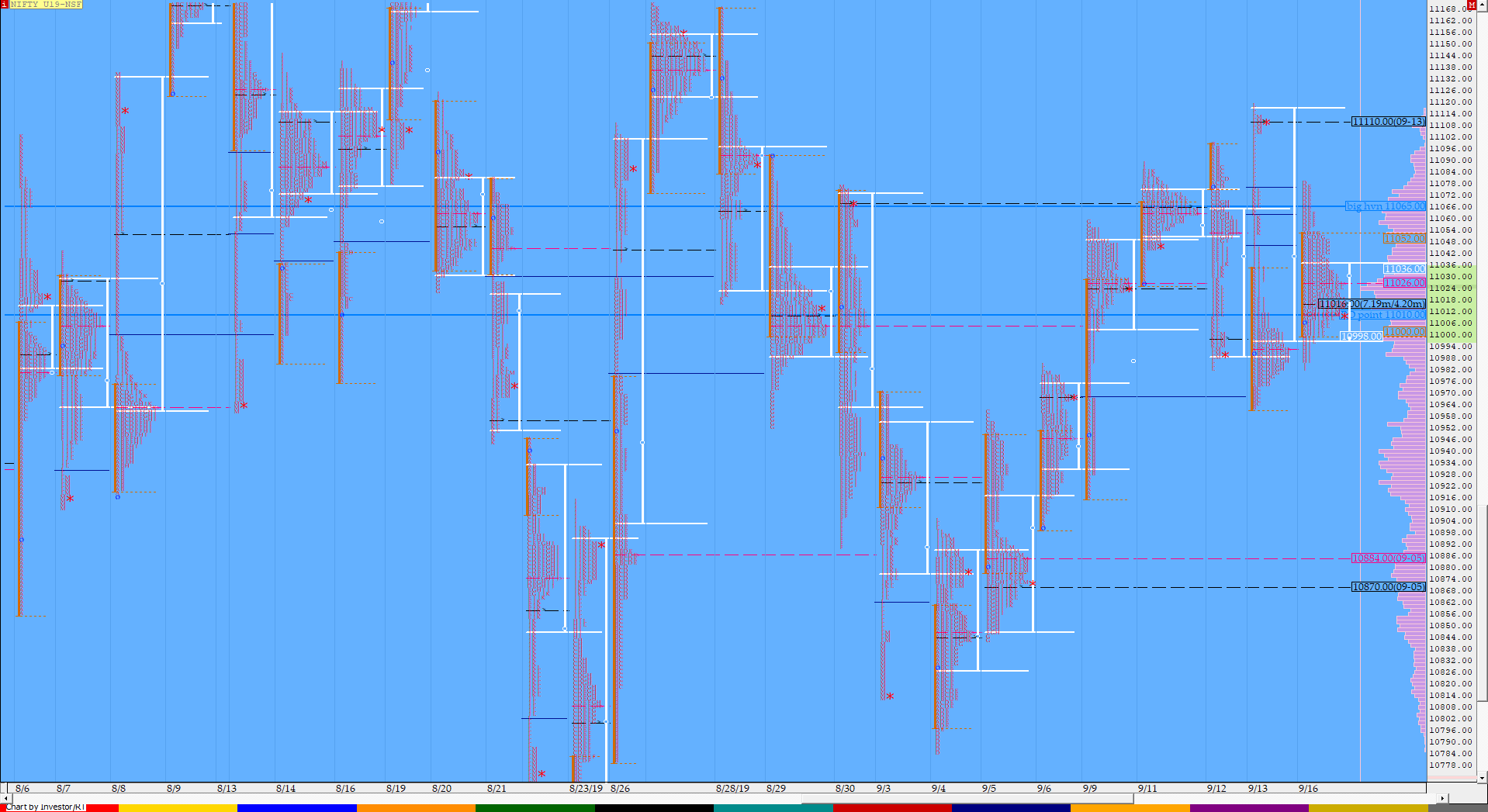 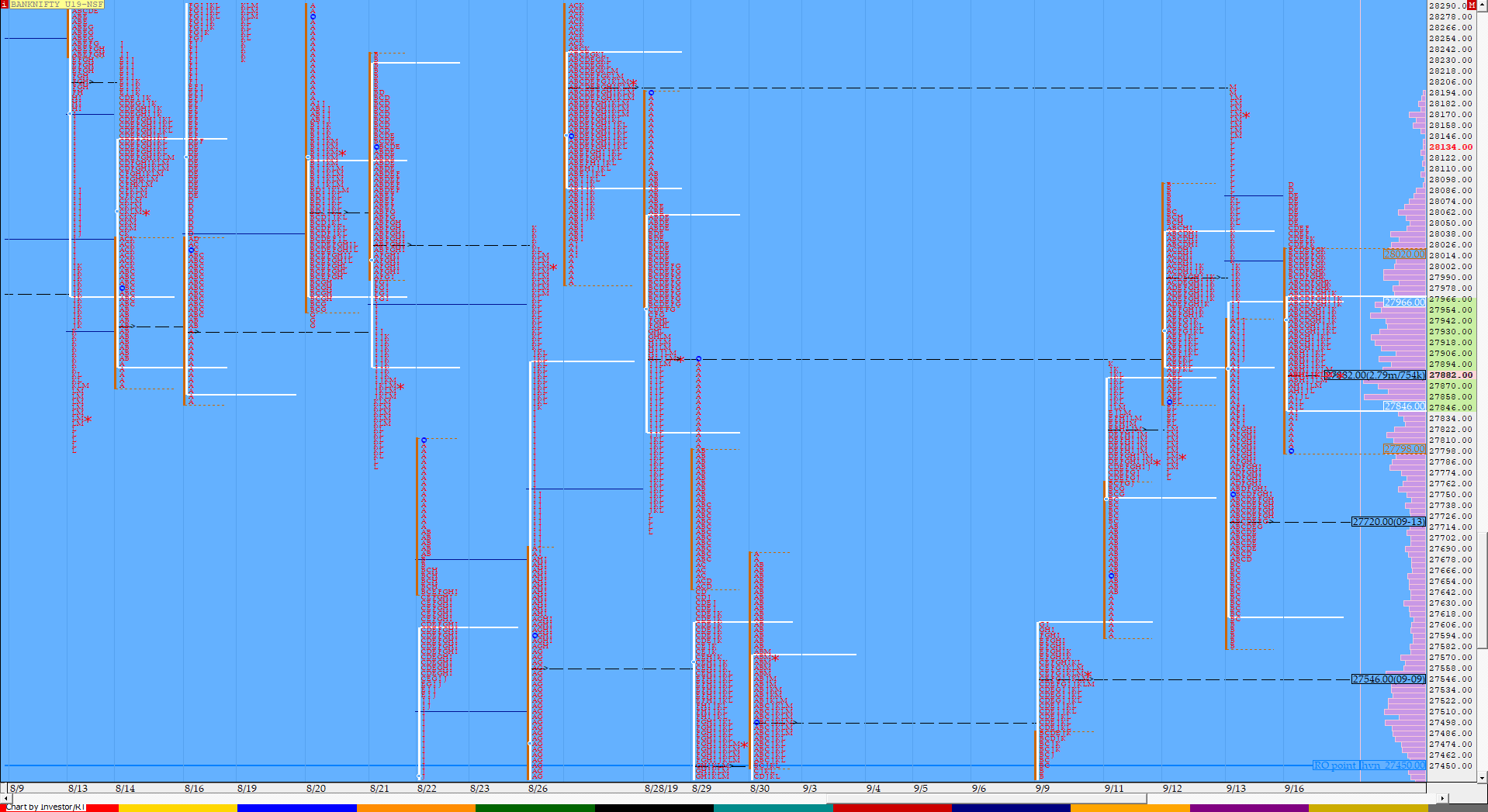 BNF also gave a big gap down of more than 350 points but was also a OL (Open=Low) start at 27801 which was the weekly POC hence an important reference to arrest further downside as it probed higher in the Initial Balance to get back above the yPOC of 27925 and made a high of 28024 in the IB (Initial Balance). The auction made a RE (Range Extension) to the upside in the ‘C’ period making a new day high of 28044 but was swiftly rejected as it got back to VWAP quickly making a low of 27917 but did not sustain below it indicating that the probe to the upside is still not completed. BNF made a fresh RE in the D period as it made highs of 28095 entering the previous day’s spike zone of 28075 to 28200 but was rejected and this was a signal that the upside could be done with as the next period then made an inside bar once again getting rejected from the spike reference as it made a lower high of 28085 after which the auction made a OTF move down for the next 4 periods as it made a low of 27838 in the ‘I’ period testing the morning buying tail from 27876 to 27801 where it seemed to have got some demand. This defense of the tail then led to a rotation higher as the auction got above VWAP and also briefly scaled above the IBH leaving a PBH of 28035  in the ‘K’ period as it faced rejection to close around the dPOC completing a nice Gaussian profile for the day which was also an inside bar both in terms of range as well as Value. BNF has also made a nice balance on the 4 day composite with an excess (in form of a spike which has been rejected) at the top and looks set to tag the 2 VPOCs on the downside at 27720 & 27540 in the coming session(s).