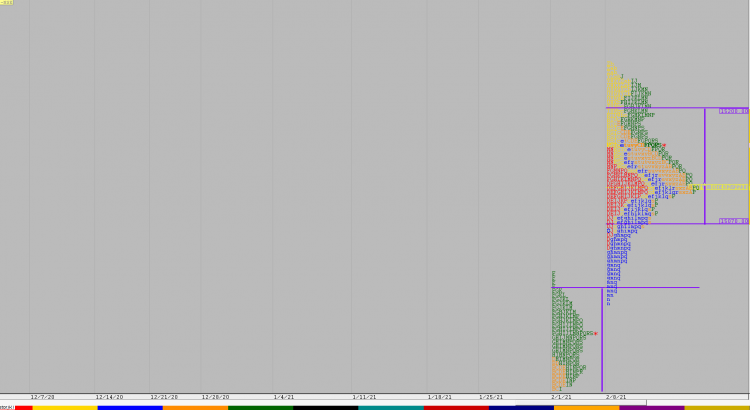 NF made an OAIR range start stalling at the yPOC of 15235 in the opening minutes as it made a high of 15238 and formed the narrowest IB range of this series of just 46 points which was hinting at a big range expansion later in the day. The auction then made the dreaded C side extension higher as it made a swipe to 15255 but was swiftly rejected as it got back into the IB providing the second clue of the day with regard to the direction of the range expansion which got more confirmation in the ‘E’ period as NF made a RE to the downside leaving an extension handle at 15192 and in the process confirmed a FA at top which triggered a trending move lower till the ‘J’ period as the auction got into previous week’s well balanced profile and completed the 80% Rule in the Value of 15190-15122-15064 to the dot as it made a low of 15065. Having completed the 4 IB objective, NF then saw some profit booking leading to a retracement to the day’s VWAP in the ‘K’ period and similar to previous day left a late PBH at 15155 which will be the important reference for the next session as it closed at the dPOC of 15117 which means the series POC and previous week’s magnet of 15120 has come back into play. Value for today’s Neutral Day was completely lower with the profile also looking like a Double Distribution with a selling tail from 15162 to 15192 in the middle which would need to be negated for further upside. On the downside, NF gets weaker below 15065 for a probable move to the 1 ATR objective of 15027 & the VPOC of 14930 in the coming session(s). 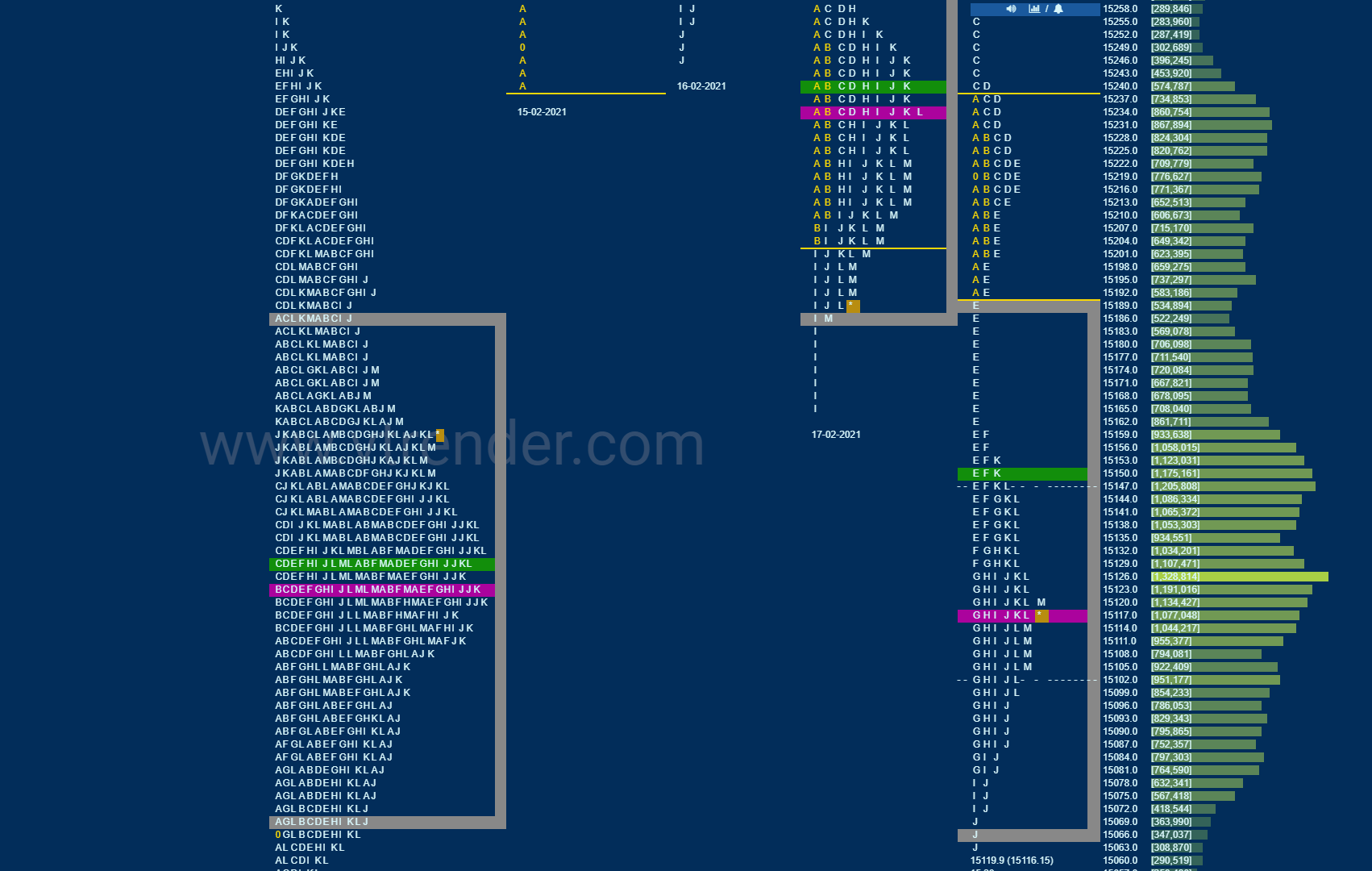 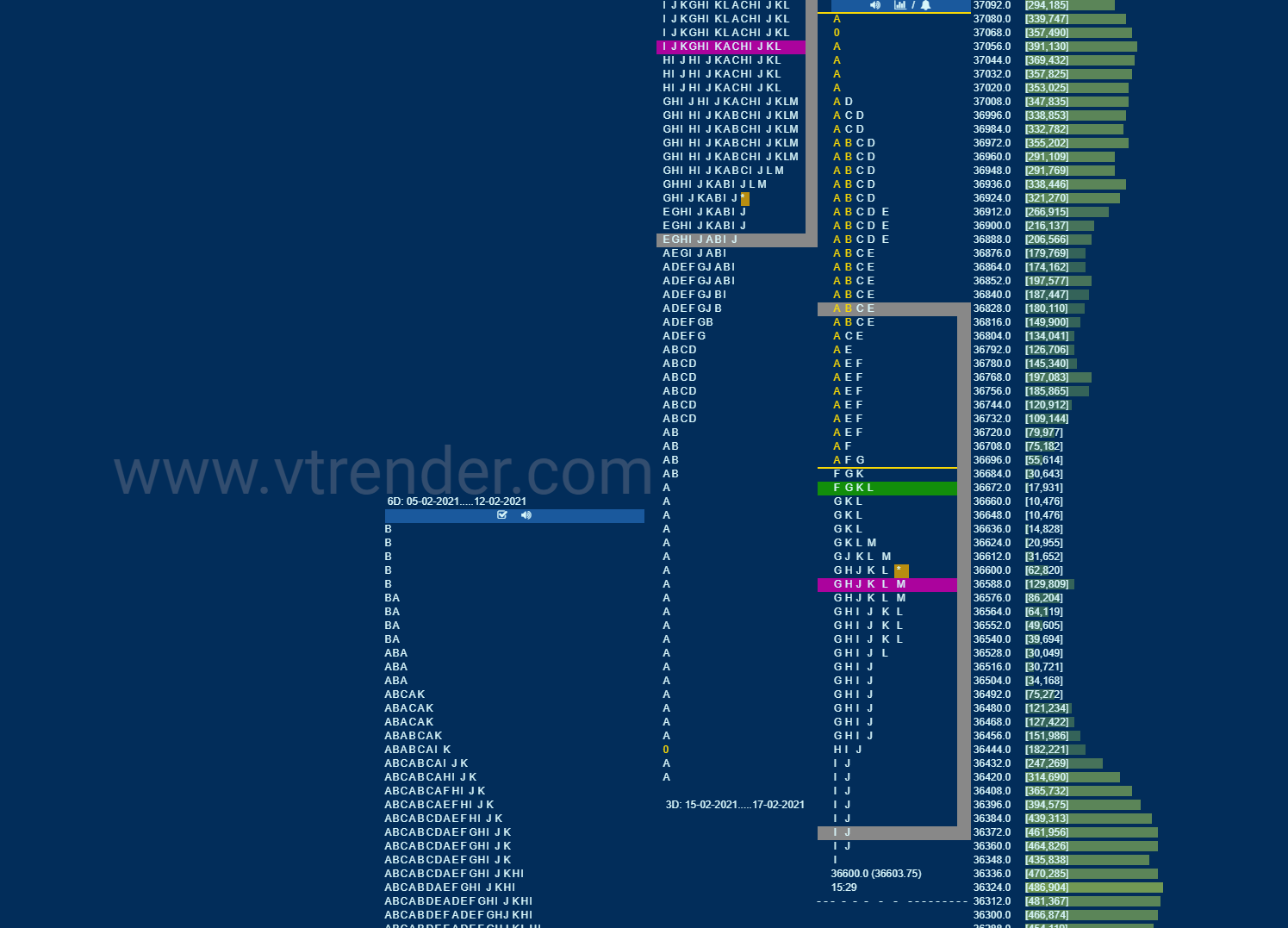 BNF once again made a freak tick in the opening minute but remained below the yPOC of 37050 and broke below the composite Value while making a low of 36782 in the ‘A’ period taking support just above the 15th Feb Trend Day POC of 36766 but at the same time giving a signal that it could be moving away from the balance it had been forming this week. The ‘B’ period made a narrow range inside bar but more importantly confirmed an initiative selling tail from 36975 to 37075 which meant that the PLR (Path of Least Resistance) remains to be on the downside. The auction then seemed to be getting some mechanical buying around the PDL (Previous Day Low) of 36820 as the attempt to break below ‘B’ period was rejected resulting in a push to the upside with the ‘C’ period getting into the day’s selling tail followed by a higher high of 37015 in the ‘D’ period but the supply seemed to be overcoming the demand as BNF not only broke below VWAP in the ‘E’ period but left an extension handle at 36782 and started an OTF (One Time Frame) probe lower till the ‘I’ period as it got into the buying tail of 36690 to 36423 negating it completely while making a low of 36352 and in the process completed the 2.5 IB objective for the day signalling the end of this leg lower. The auction then gave a retracment to the day’s VWAP as it left a PBH at 36692 in the ‘K’ period before closing the day at the dPOC of 36600 leaving a Double Distribution Trend Day Down with completely lower Value.