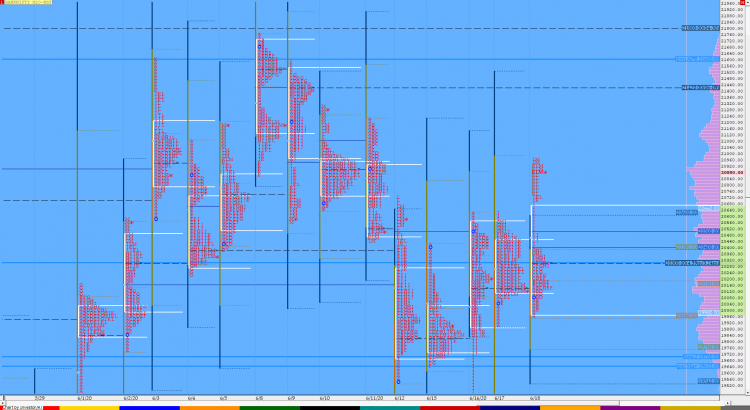 NF made yet another OAIR (Open Auction In Range) start holding above 9810 as it made a low of 9825 but stayed below 9894 forming the lowest IB (Initial Balance) range of this series of just 57 points beating the last Thursday’s range by 2 points. The auction then made a C side RE (Range Extension) which got above 9894 but was rejected at yesterday’s VWAP of 9904 from where it made a retracement to VWAP leaving a PBL (Pull Back Low) at 9856. NF then made a fresh RE in the ‘E’ period which started a trending move higher for the rest of the day as it not only completed the 3 IB objective of 9997 but went on to almost tag the 5 IB mark while making a high of 10104 getting stalled just below the VPOC of 10110. The profile has couple of extension handles at 9980 & 10008 plus a spike close of 10032 to 10104 and the spike rules will be in play for the next open. 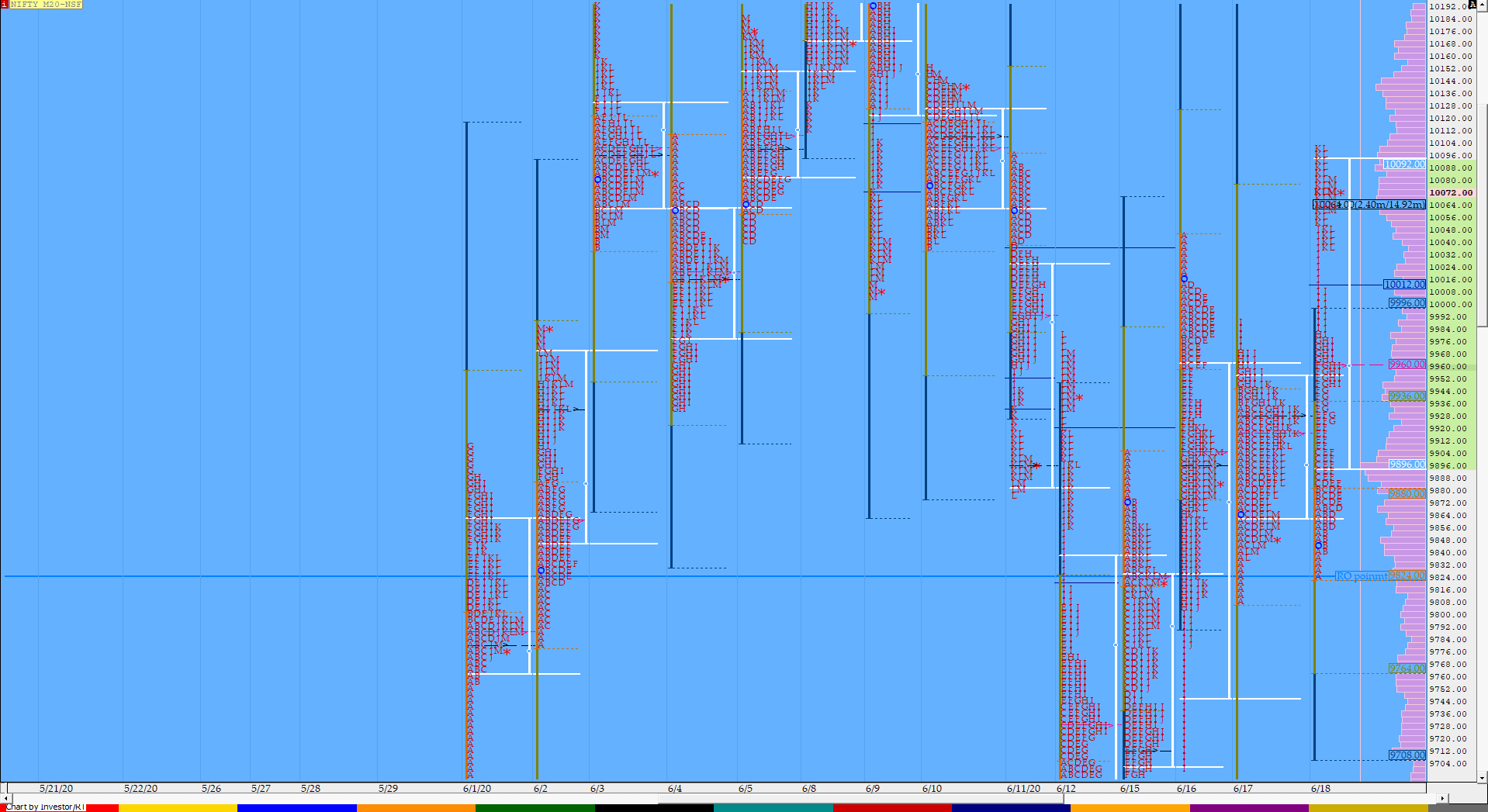 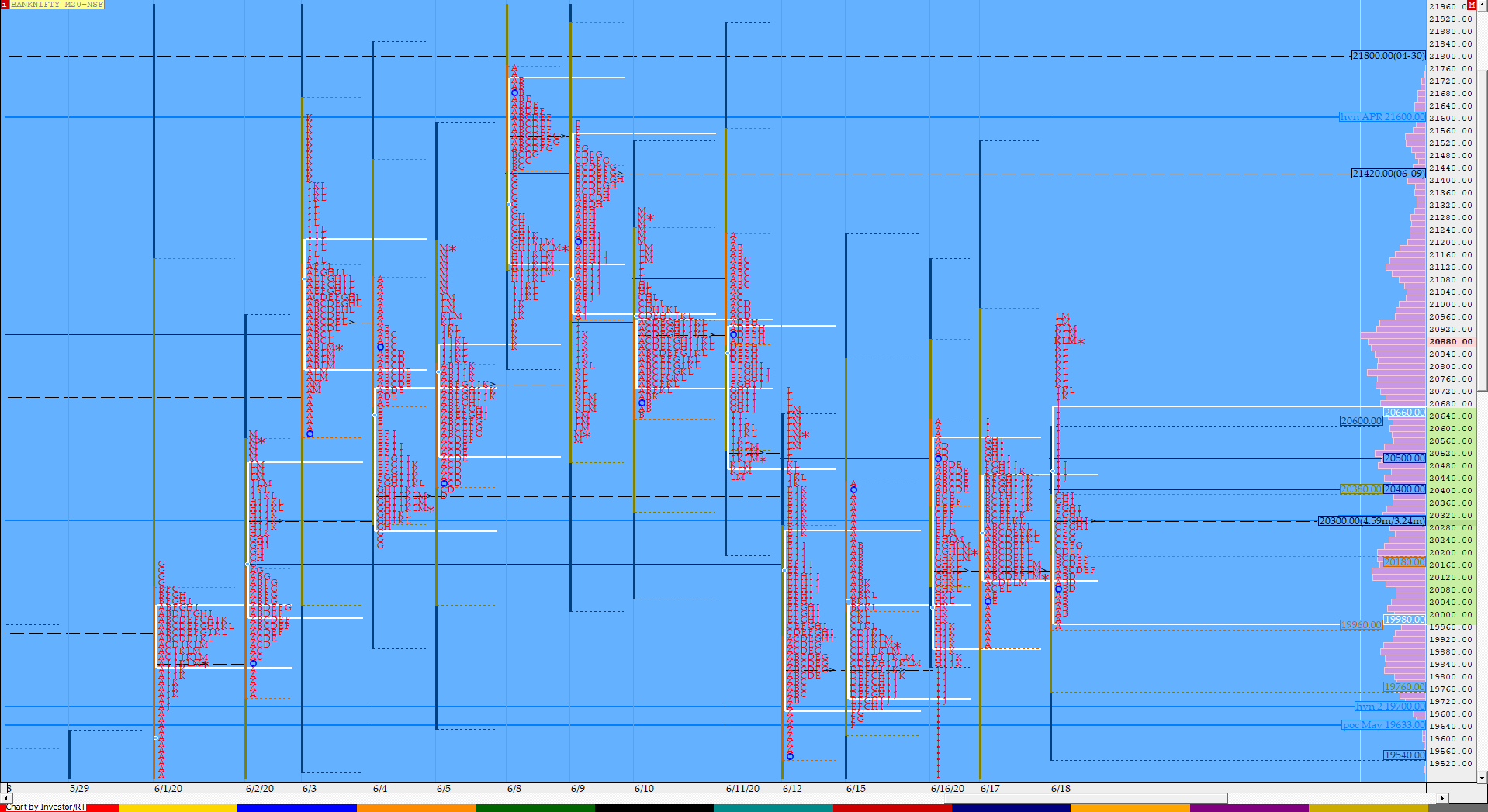 BNF made a weak start for the day after making a high of 20150 as it seemed to move away from the overlapping POC of 20140 in the ‘A’ period but support at 19977 after which it got back above VWAP in the following period and went on to make new highs for the day but similar to NF, left the narrowest IB range of just 215 points for the June series which indicated that a big IB range could be in play for the day. The auction then made a ‘C’ side extension in form of a spike as it made a high of 20300 but was swiftly rejected resulting in a retracement to VWAP as it left a PBL at 20096 in the ‘D’ period. The ‘E’ period then remained in a narrow range of less than 90 points and the ‘F’ period began by a look below ‘E’ but was rejected right at 20141 and this was an important nuance as the auction wanted to stay above the 2-day overlapping POC which meant that the PLR was to the upside resulting in a fresh RE to the upside followed by a huge 800+ point rally over the rest of the day as BNF took out that congestion zone of 20535-640 and made highs of 20975 before closing the day around the important HVN of 20900. Spike rules will apply for the open and the reference is 20490 to 20975.