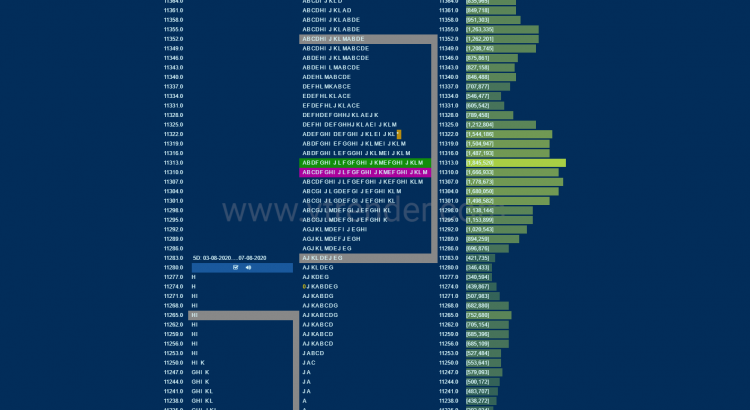 NF continued the imbalance of the previous day with a gap up open at new highs for the series and went on to tag 11452 as it stayed above PDH (Previous Day High) in the IB (Initial Balance) but was stuck in a very narrow range of just 35 points. The auction remained in this range for the next 2 periods before making a RE (Range Extension) lower in the ‘E’ period where it made new lows of 11407 but could not sustain below the IB and got back above the IBL to continue form a balance. The ‘J’ period then saw similar action as the ‘E’ period but on the upside as NF made an attempt to break above IBH and hit new hgihs of 11466 but was swiftly rejected back as it went on to complete the 80% Rule in the day’s developing Value and even made a fresh RE on the downside in the ‘L’ period confirming a FA (Failed Auction) at top before closing the day around the combo of the dPOC & VWAP of 11435. The day ended as a Neutral profile with completely higher Value but saw contraction of range as well as volumes which means poor trade facilitation so there is good chance of this balance giving way to an imbalance in the coming session. 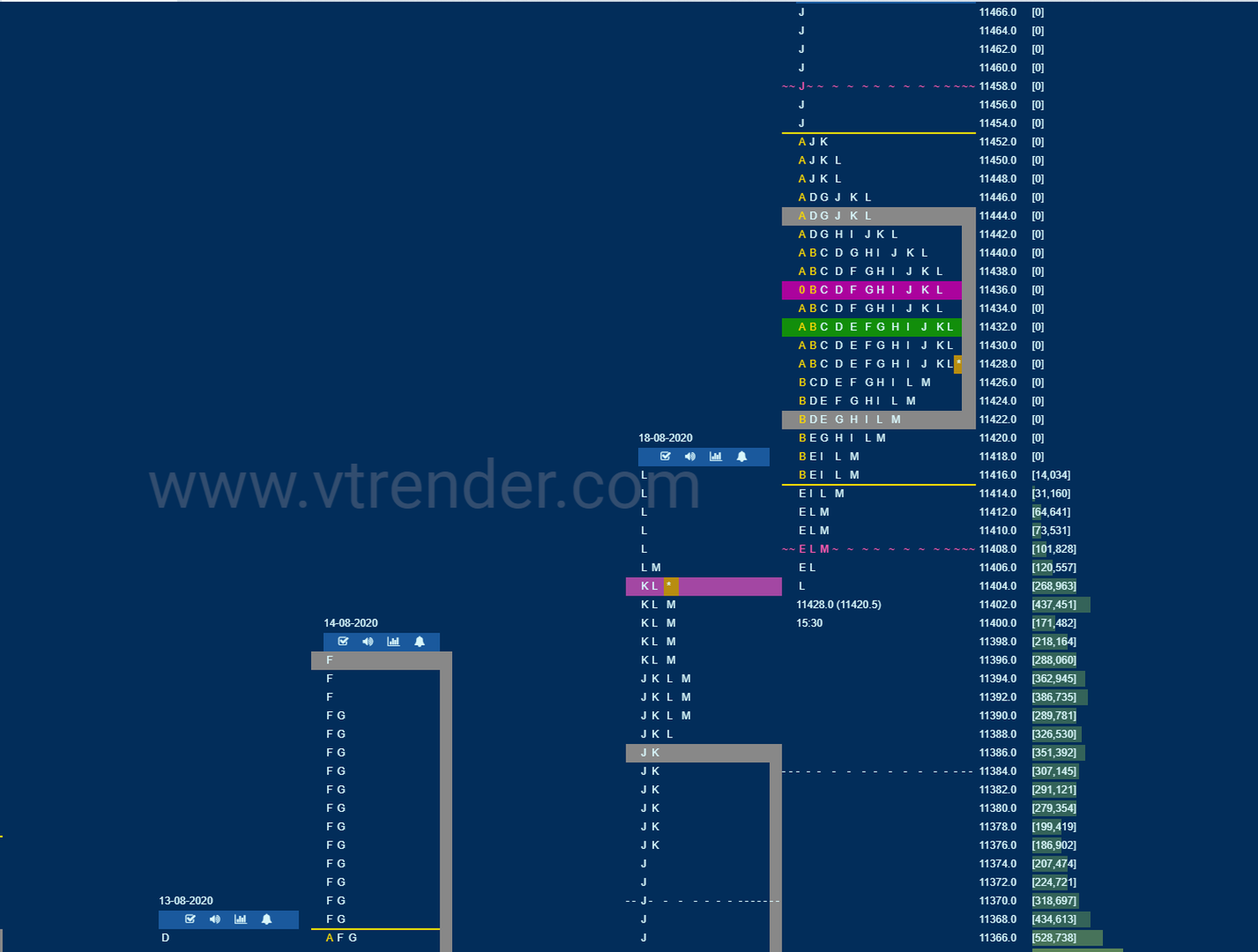 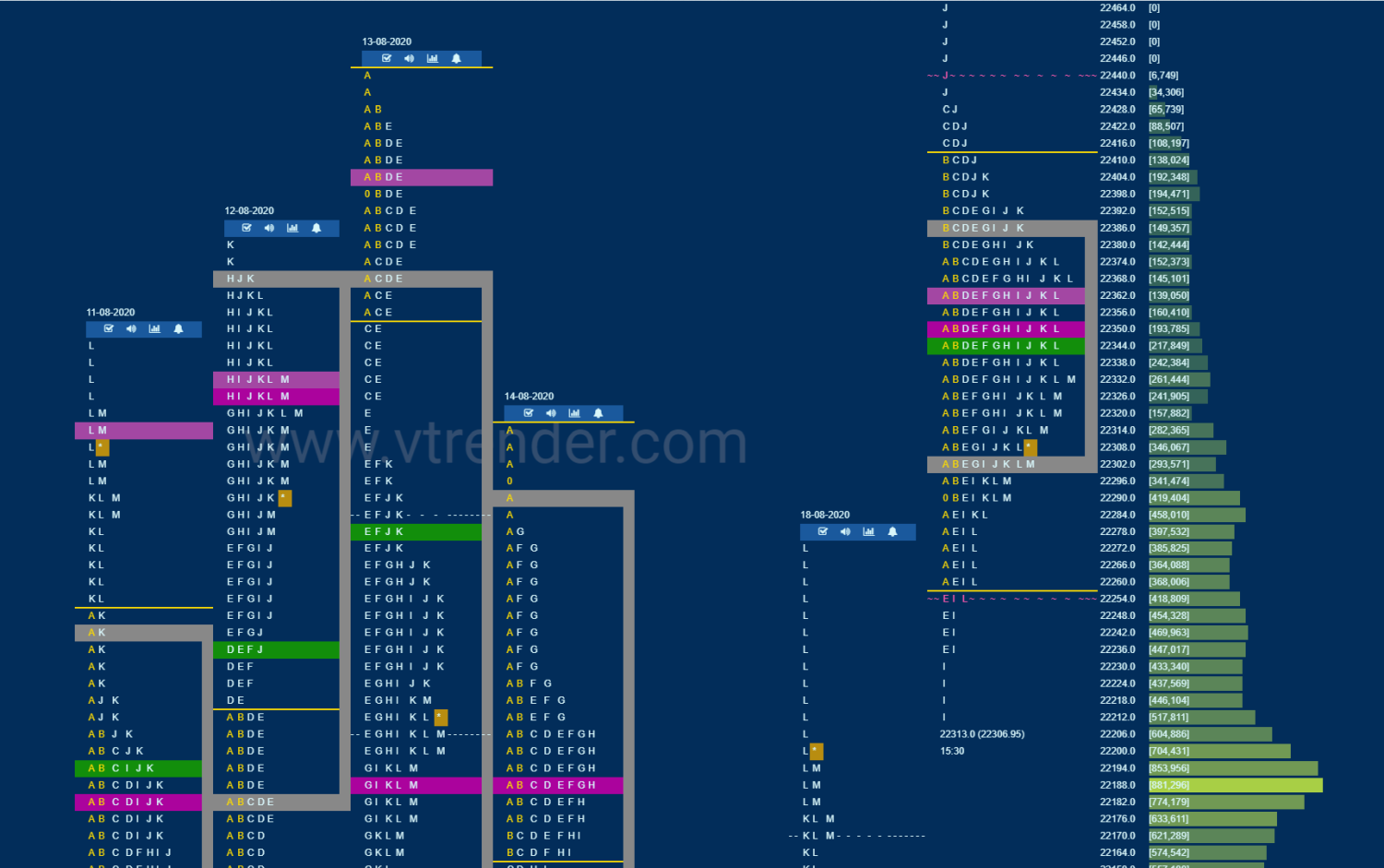 BNF also opened higher and got accepted above the level of 22280 as it went on to make a high of 22413 in the IB and similar to NF remained in a narrow range of just 150 points in the IB. The auction then made a C side extension on the upside tagging new highs for the day at 22434 but got stalled just below the series high of 22444 leading to a probe lower as it not only broke below VWAP but went on to make a RE lower in the E period where it made a low of 22237. However, BNF could not sustain below the IBL also as it got back in the IB and was forming a balanced profile before it made another attempt to break lower in the ‘I’ period where it made new lows of 22213 but once again was swiftly rejected back into the IB and this time it led to a probable short covering squeeze as it went on to make a RE on the upside in the ‘J’ period marking new highs for the series at 22466 but just as the day had seen so far, this new extreme also was rejected as the auction left a small but am important tail at these new highs and even went on to confirm a FA here as it briefly broke below the IBL in the ‘L’ period before closing the day at 22307 leaving a Neutral Gaussian profile with completely higher Value. Staying below today’s IBL, BNF could start a new leg lower towards the 1 ATR & 2 ATR objectives of 21968 & 21471 respectively in the coming session(s).