Yesterday’s report ended with this ‘NF has a HVN at 11480 on the downside which would be the immediate support below 11510 and on the upside it would need to sustain above 11568 for a test of the VPOC of 11591 in the coming session(s).‘

NF started the day with an OL start at 11564 scaling above the HVN of 11568 as it went on to tag the VPOC of 11591 and made highs of 11607 but this drive up on low volumes failed in the ‘A’ period itself as it not only retraced the entire move but made new lows of 11547 and continued this move lower in the ‘B’ period as it broke below the support of 11510 & went on to test the HVN of 11480 making a low of 11472 breaking briefly below PDL (Previous Day Low) but got swiftly rejected as it left a large IB range of 135 points. The auction then made an inside bar in the ‘C’ period after which it probed higher in the ‘D’ period scaling above VWAP and testing the morning tail of 11560 to 11607 as it tagged 11595 but remained inside the IB range and continued to form a nice balance till the ‘H’ period with a HVN building at 11550. The ‘I’ period then gave a move away from this intra-day balance with a RE to the downside leaving an extension handle at 11472 as NF trended lower and more than doubled the IB range as it made lows of 11310 in the ‘K’ period in the process tagging the trend day VPOC of 11330 it had left on 20th Sep where it seemed to get new demand which led to a good bounce to 11449 before the auction closed the day at 11430 leaving a Double Distribution Trend Day Down which was an outside bar on the daily time-frame. Value for the day also extended on both sides as compared to previous day’s Value but the close was near to the VAL which means that the PLR would be to the downside if the auction stays below 11416. On the upside, 11490 would be the important level to watch if NF manages to get above 11451. 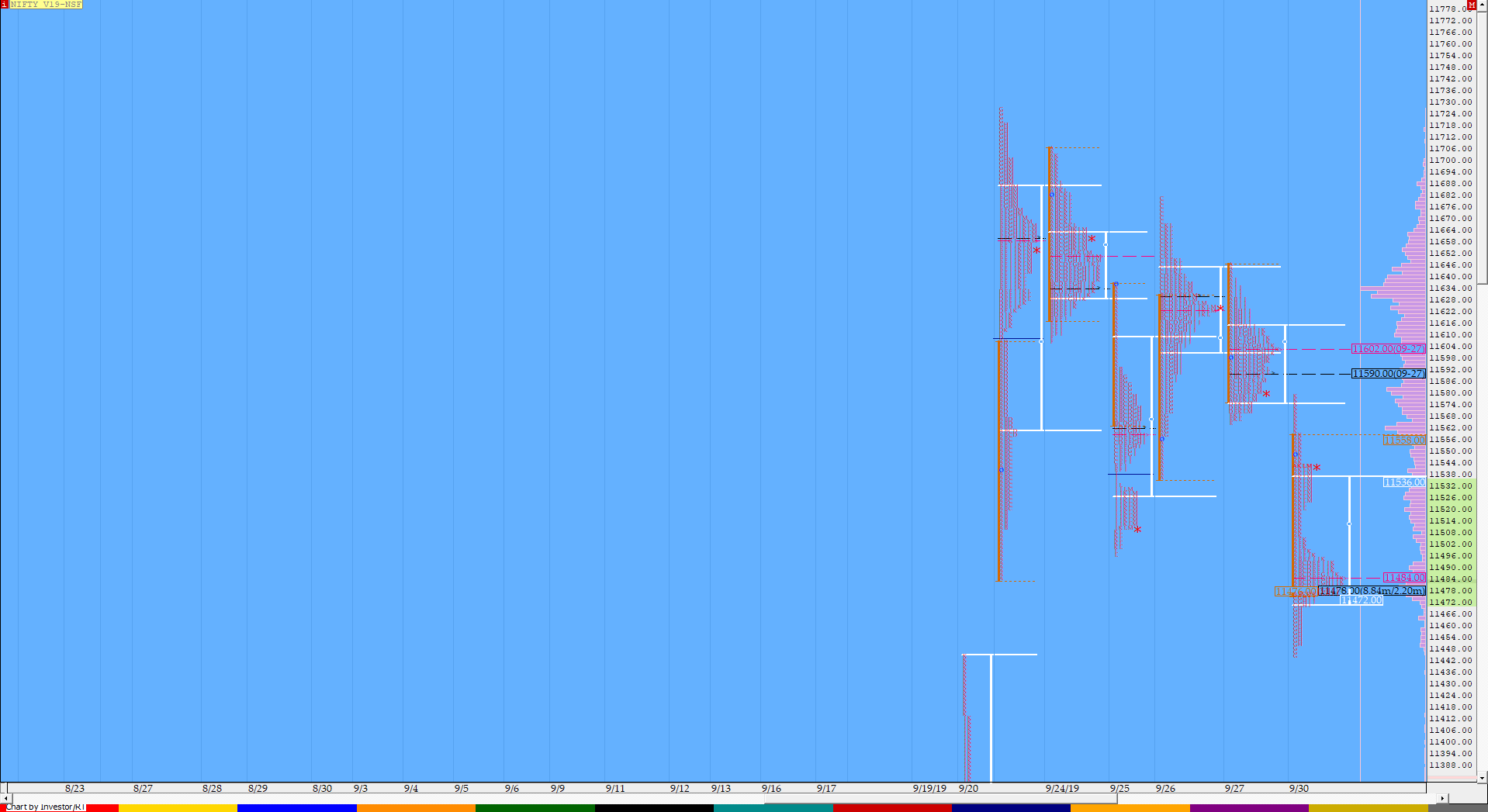 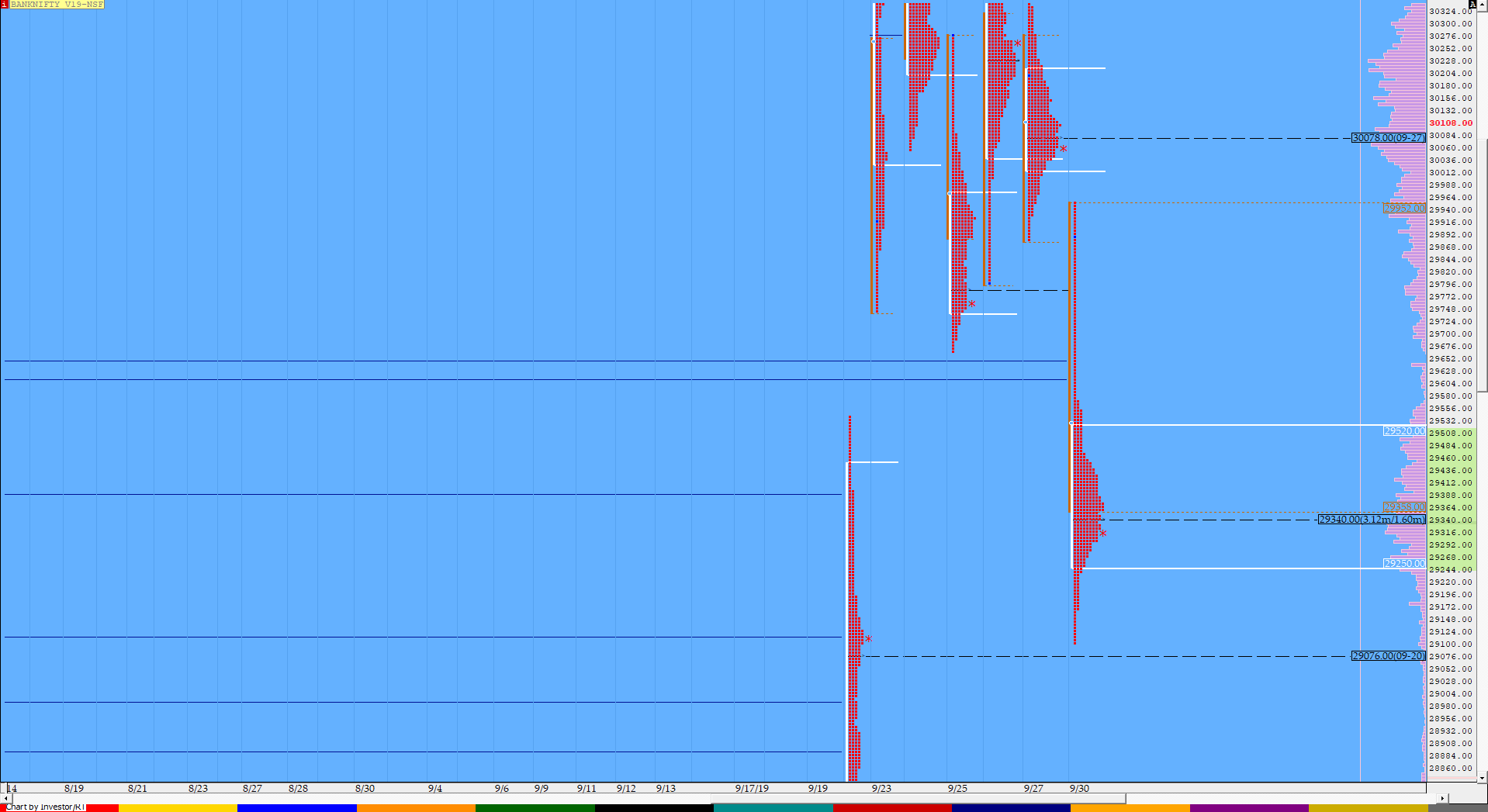 BNF opened higher above the yPOC of 29350 of previous day’s ‘b’ shape profile which was a bullish sign as it rose further making a high of 29724 in the ‘A’ period but could not sustain above VWAP and this led to a big liquidation move in the ‘B’ period as it not only closed the gap but went on to break below PDL (Previous Day Low) while making a low of 28982 and leaving a huge IB range of 742 points. The auction then remained within this range for the next 6 periods forming a balance and building volumes around the yPOC of 29350 with Value also similar to the previous day and saw initiative action in the ‘I’ period as BNF moved away from this balance making a RE to the downside starting a new leg lower as it broke below the 20th September’s Trend Day POC of 29078 and then went on to break that day’s VWAP of 28548 and similar to NF more than doubled the day’s range as it made a low of 28218 in the ‘J’ period stopping just above the extension handle it had left on 20/09 at 28188. The auction then gave a good retracement over the next 2 periods as it almost tagged today’s extension handle of 28982 while leaving a pull back high of 28971 in the ‘L’ period before closing at 28875 leaving a Double Distribution profile for the day. Today’s VWAP of 29069 will be an important reference for the coming session(s) above which 29350 will be the level to watch on any move higher but staying below 28892, the PLR would remain to the downside.