Previous day’s report ended with this ‘On the upside, the FA of 9384 would be the level to be taken out & sustained to confirm a new leg higher and on the downside, 9270-35 & 9210 would be the important support levels to watch which if broken could get new initiative selling to take NF lower in the coming days‘

NF opened higher & tagged that FA of 9384 and got swiftly rejected from this positional reference as it probed lower through the ‘A’ period as it made lows of 9245 testing the level from where it had spiked higher on Friday. The ‘B’ period then made an inside bar but more importantly confirmed a tail at top from 9385 to 9300 which was an important one as this came at new highs & at an important supply point. The auction then made an attempt to probe higher in the next 2 periods as it got into singles but could only leave a PBH (Pull Back High) of 9337 in the ‘D’ period and the failure to get back above PDH (Previous Day High) meant that the PLR was still to the downside and this led to a RE (Range Extension) lower in the ‘E’ period as NF made new lows of 9215 but took support just above that 9210 level indicating demand coming in. The rest of the day remained in this range forming a nice balance with a higher PBL at 9226 & a lower PBH at 9335 as the auction formed a ‘b’ shape profile for the day with a very prominent POC at 9276 which had 12 of the 13 TPOS aligned together and this balance at new highs with a small excess confirmed from 9337 to 9385 could lead to a probe lower below 9210 with the first objectives being the VPOCs of 9180 & 9050 in the coming session(s). 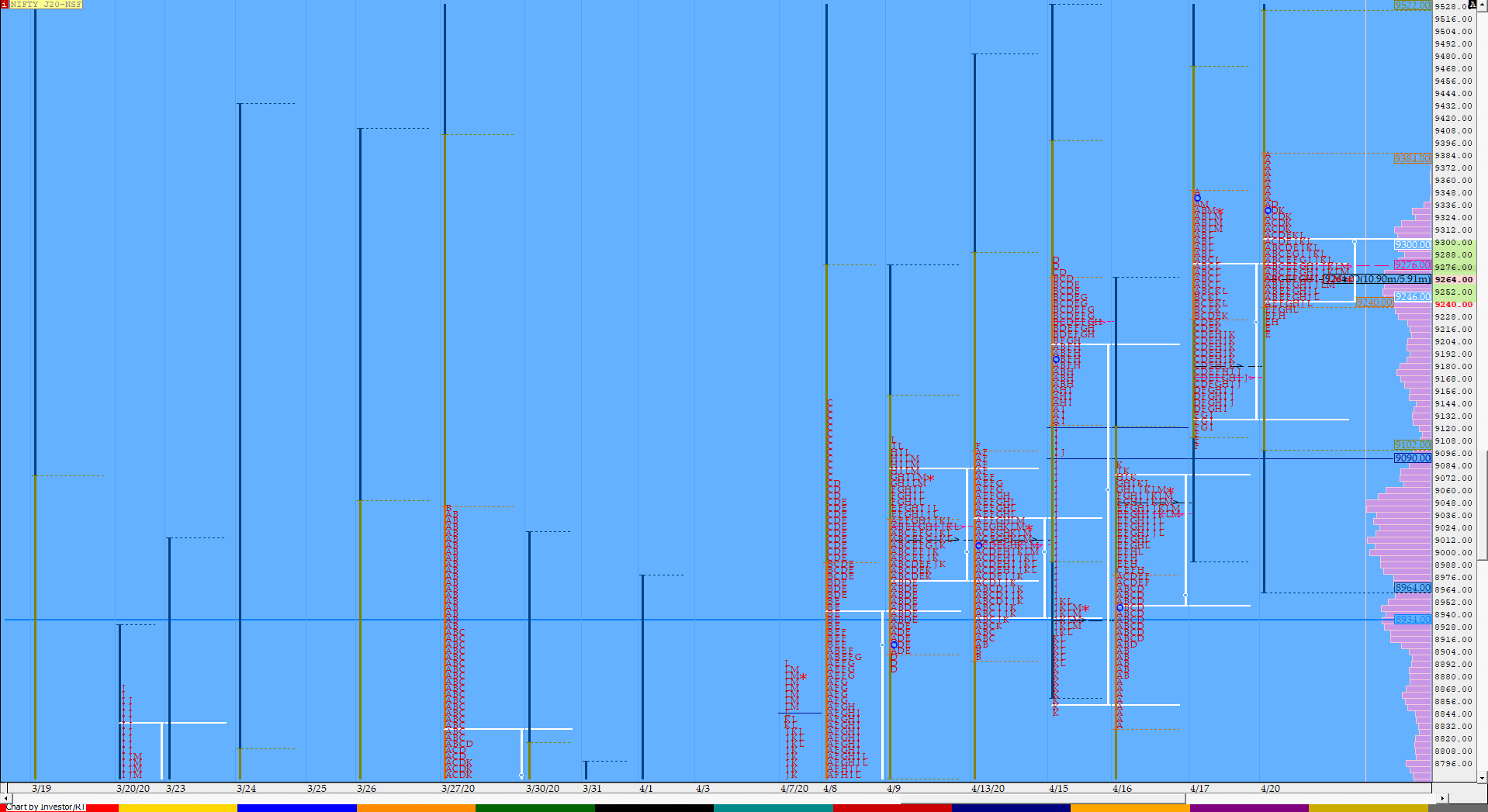 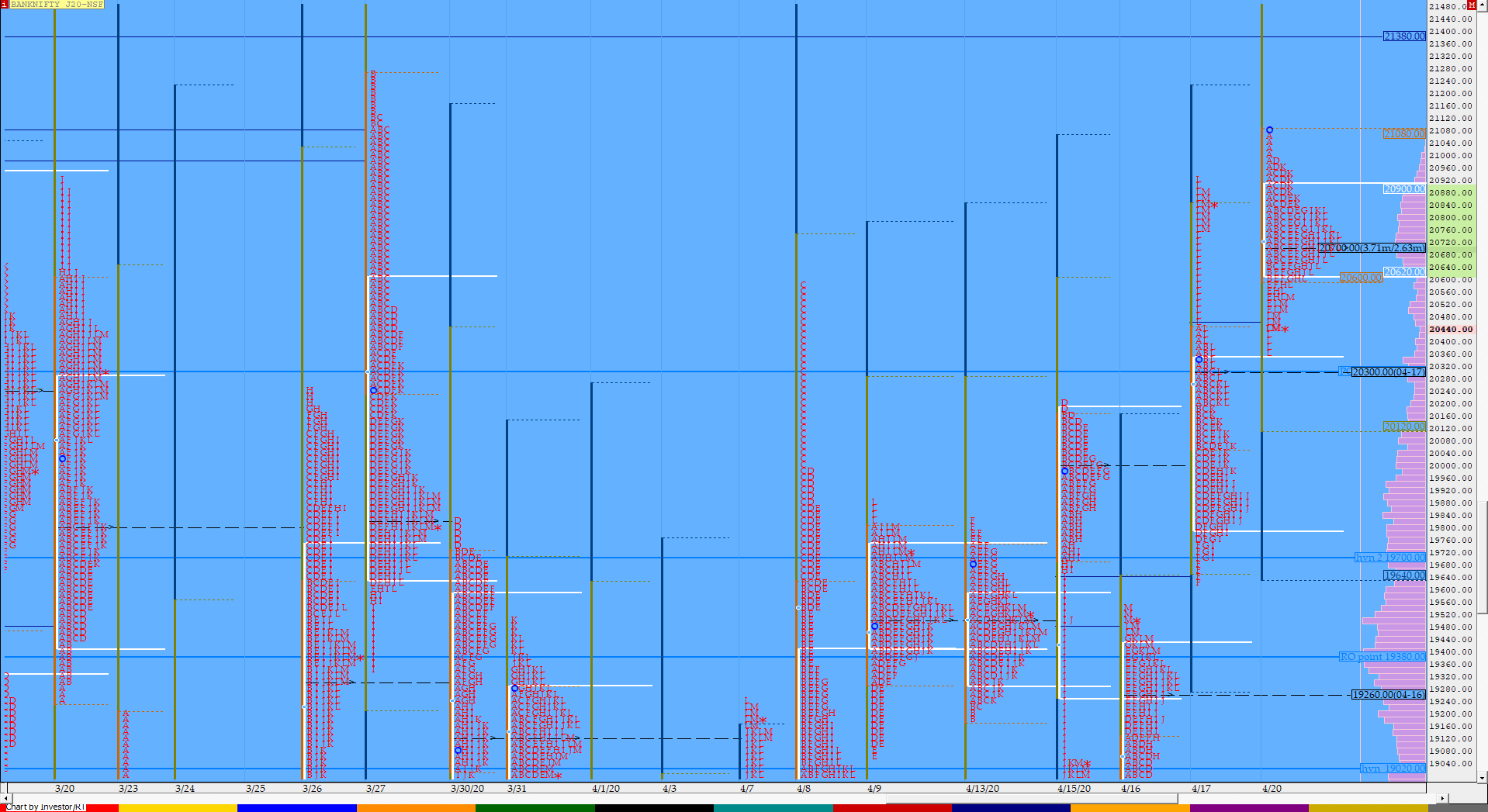 BNF opened higher giving an exception as it gave a follow up to the Neutral Extreme profile of Friday but was almost an OH (Open=High) start around 21100 after which it probed lower getting back into the Neutral Extreme reference as it made lows of 20610 in the IB leaving a tail at top from 20836 to 21100. The auction then probed higher for the next 2 periods as it got accepted in that morning singles but got rejected at 20990 in the ‘D’ period where it confirmed a PBH & went on to make a RE to the downside in the ‘E’ period as it made new lows of 20517. The sellers however could not sustain the auction below the IBL as BNF started to form a balance rotating around VWAP for most part of the day before it gave a short covering move in the ‘K’ period as it got back above PDH but was stalled right below the earlier PBH of 20990 and this led to a spike lower into the close as the auction broke below the Neutral Extreme low of 20452 and made lows of 20375 before closing the day at 20482 confirming an excess at top from 20990 to 21100 which would be an important zone for the week. Spike rules will be in play for the next open & the reference is 20517 to 20375 apart from today’s prominent POC at 20700.