NF made a big gap down open of 123 points completing the 1 ATR objective of 11317 as it also tagged the VPOC of 11311 at open while making a low of 11292 in the ‘A’ period and for the second consecutive day formed a narrow range of just 38 points in the IB (Initial Balance). The auction then made a C side extension as it made new highs of 11348 almost tagging the 1.5 IB extension after which it made a probe to the VWAP which was defended giving rise to the expectation of the 2 IB target of 11368 being hit but NF could not make a higher high post C period and once again tested the VWAP in the ‘G’ period which was broken this time leading to a quick fall to 11260 which was the buying tail of Tuesday and once again saw some demand coming back as it left yet another tail at lows to get back into the IB. This buying tail made a probe above VWAP in the ‘H’ period which inturn led to a fresh RE on the upside in the ‘I’ period as the auction hit 11360 but similar to the lows was met with good supply here as it left a selling tail and went on to break below both the VWAP & the IBL to confirm yet another FA but got support in the buying tail after which it remained in the IB to complete a 3-1-3 Neutral Centre Day with a close right at the dPOC of 11305. Value for the day was completely lower & the 2-day composite represents a DD (Double Distribution) with the HVNs at 11301 & 11435 where the auction seems to be currently locked in. 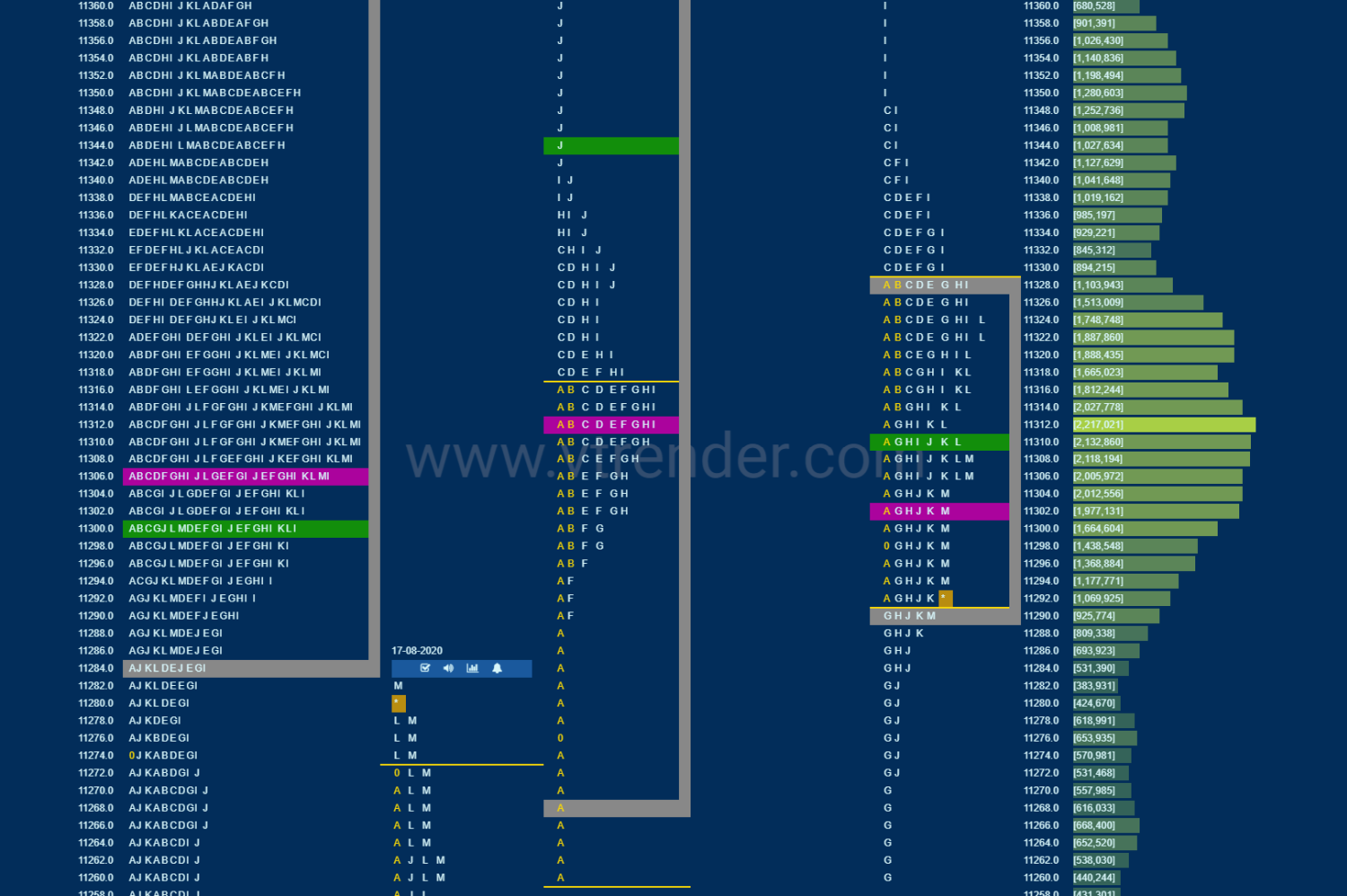 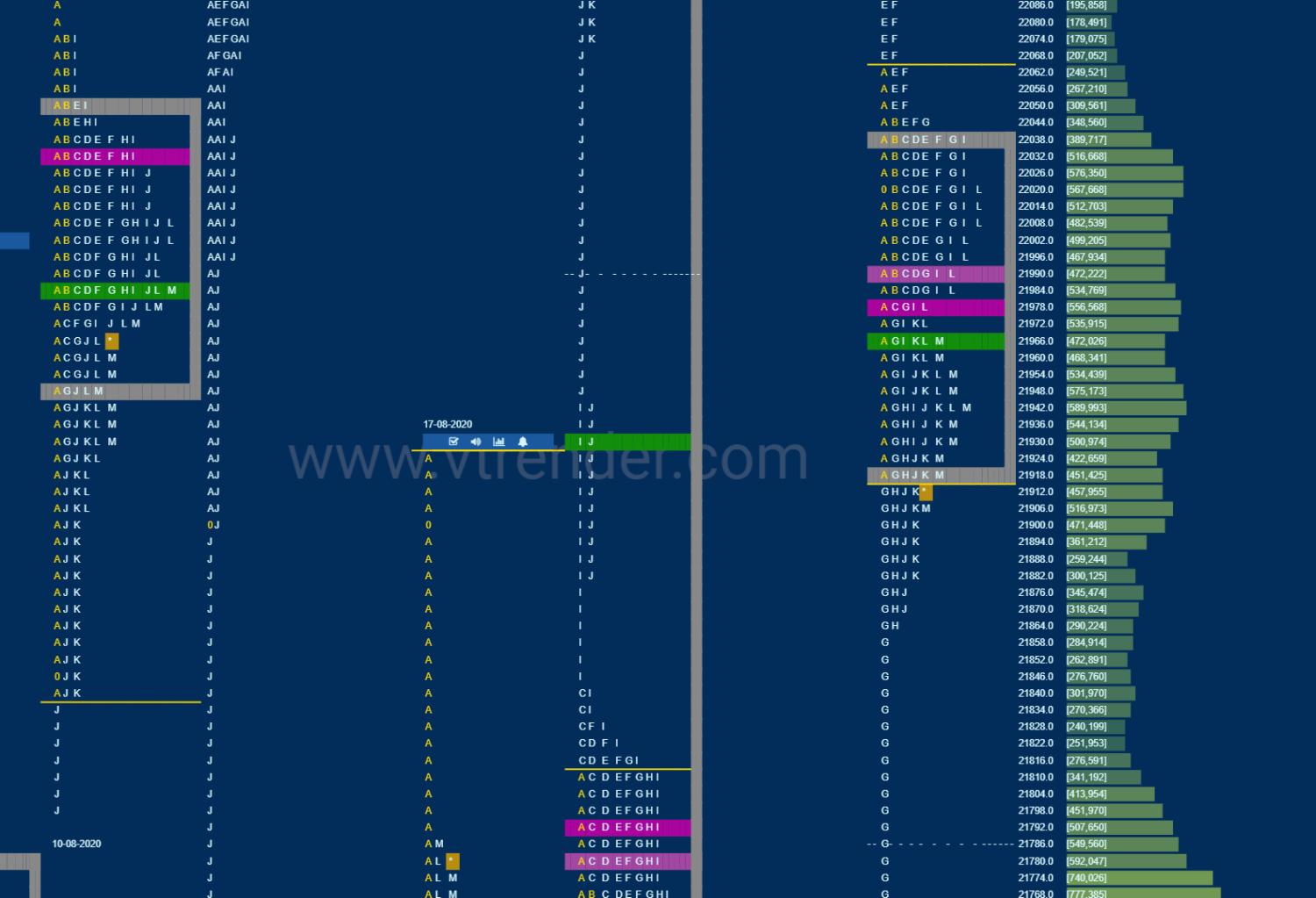 BNF also made a gap down open and went on to tag the 1 ATR of 21968 from previous day’s FA of 22466 as it made a low of 21923 in the IB forming a narrow range of just 142 points with a high of 22065. The auction remained in this narrow range till the ‘D’ period before making an attempt to probe higher in the ‘E’ period as it made marignal new highs of 22090 but could not sustain above IBH leaving poor highs indicating lack of demand and this led to a big liquidation move lower in the ‘G’ period as BNF not only broke below VWAP but also made a RE lower confirming another FA today at top and went on to complete the 2 IB objective of 21782 as it made a low of 21765 and in the process tagged the VPOC of 21800. However, it left a long buying tail at lows to get back into the IB in the ‘H’ period and probed above VWAP but was met with supply around IBH as it formed a balanced profile closing around the dPOC of 21985 leaving a Neutral profile with a FA at top and a buying tail at lows. Similar to NF, BNF also represents a DD on the 2-day composite with the HVNs at 21985 & 22360 so staying above 21985 the auction could fill up the low volume zone between these HVNs in the coming session and on the downside, acceptance below 21980 could lead to a probe of the buying tail from 21864 to 21765 and a break of that could test the buyer of 21660 and the VPOC of 21600 lower.