NF opened lower below the Neutral Extreme reference of 12128 to 12150 but also made an almost OL (Open=Low) start of 12103-12100 as it made an attempt to get back into the previous day’s spike of 12140-12150 but got stalled at 12134 in the ‘A’ period. The ‘B’ period then made an inside bar leaving small tails at both ends in the IB (Initial Balance) inspite of leaving the narrowest IB range of just 34 points for the year 2020 so far. The auction then made a ‘C’ side RE (Range Extension) to the upside and followed it up by multiple REs in the E & F periods too as it scaled above PDH (Previous Day High) and almost tagged the 2 IB extension of 12168 as it made a high of 12163 stopping right at the prominent weekly POC of 12162 which was an important level. The inability to get fresh demand here led to a trending move to the downside for the rest of the day as NF not only broke below VWAP but also went on to make a RE to the downside closing in a spike and completing the 2 IB target of 12066 in the ‘L’ period as it made lows of 12065 stopping just at the top of previous day’s buying tail. NF closed the day at 12079 but has given a second successive Neutral Extreme profile though in opposite directions leaving a nice 2-day balanced profile and could lead to a trending move down as the seller seems to be taking control. The Neutral Extreme reference for the next session would be 12100 to 12065 below which we have the important reference of the FA at 12047 which if taken out could lead to a 1 ATR objective to the downside which comes to 11909. On the upside, NF would need to stay above 12090-095 to remain in the 2-day balance and could complete the 80% Rule of tagging 12114 & 12147. 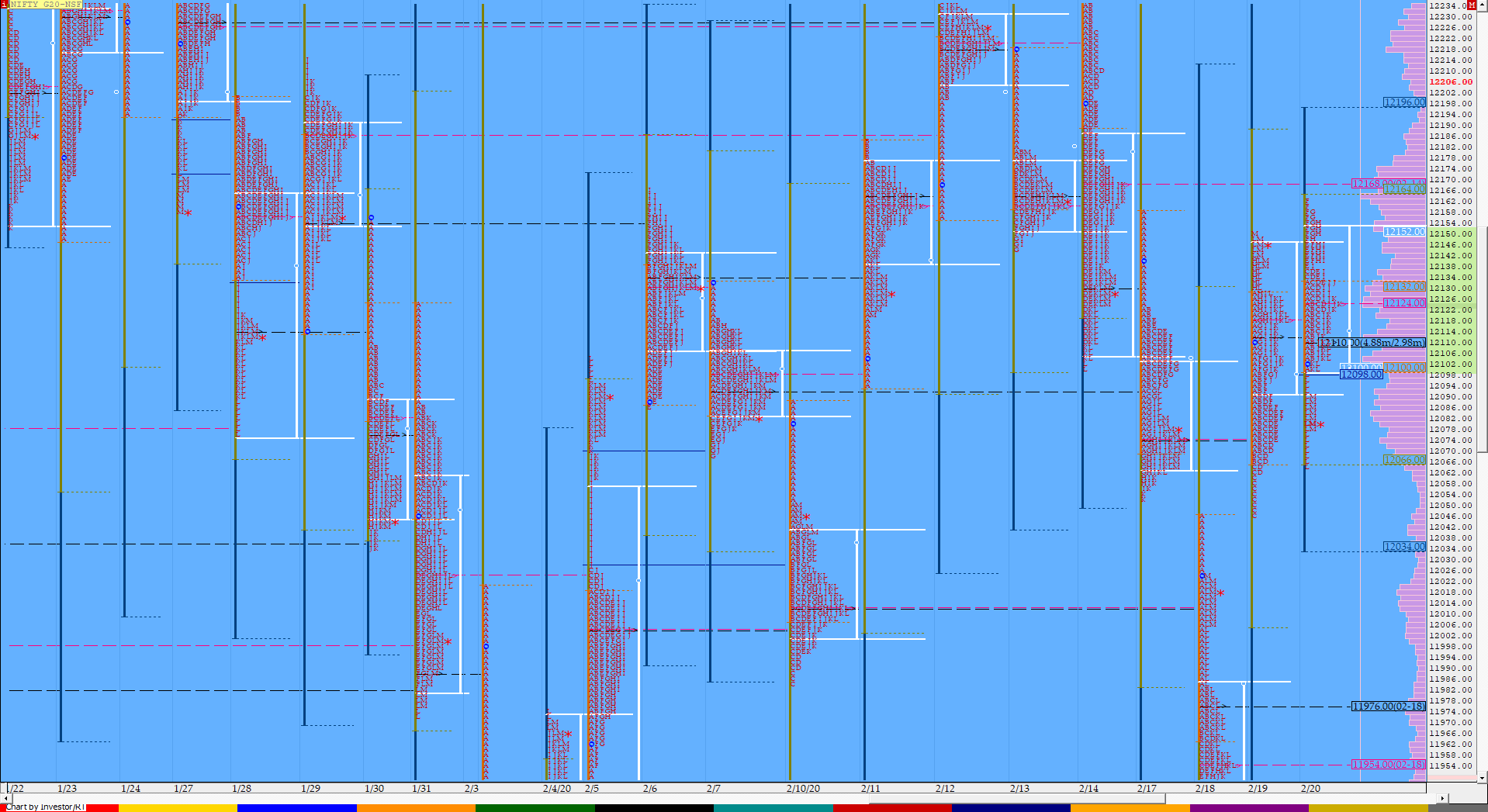 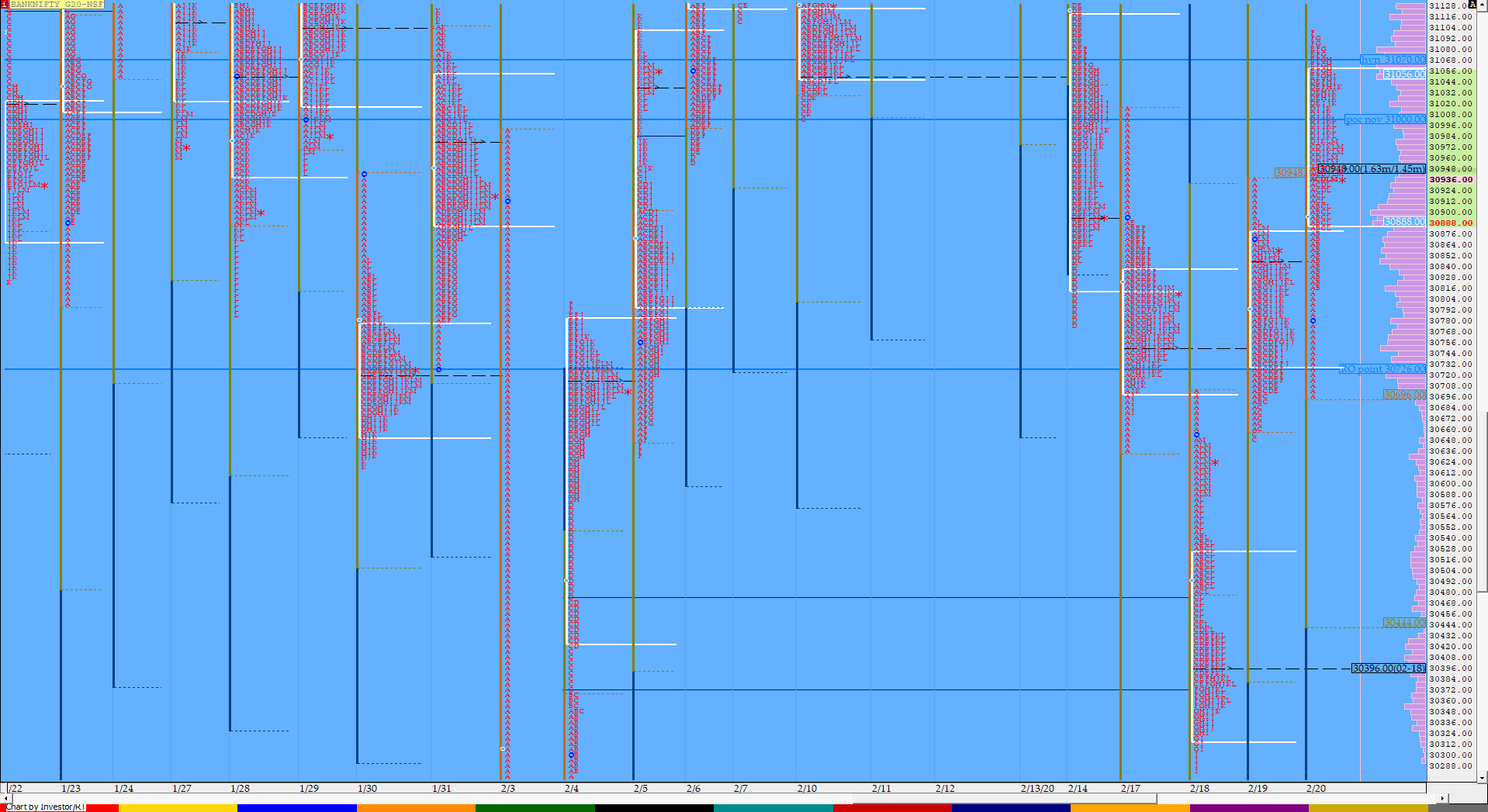 Previous day’s report ended with this ‘On the downside, 30850 would be the immediate reference below which 30785 & 30730 would be important support levels to watch out for...’

BNF opened lower right at the first support level of 30785 but probed lower breaking below 30730 as it made lows of 30698 in the opening minutes but was swiftly rejected as it not only got back above 30785 but went on to scale above the important level of 30850 as it made new highs for the day at 30952 in the ‘A’ period indicating good demand coming in the dip at open which also confirmed a multi-day FA (Failed Auction) at PDL (Previous Day Low) of 30652. The auction then made an inside bar in the B period as it probed lower to test VWAP but closed above 30850 leaving a buying tail from 30819 to 30698 in the IB which meant that the PLR would be to the upside. BNF then made multiple REs to the upside in the next 4 periods as it tagged the trend day VWAP of 31067 as well as the weekly POC of 31080 which was also the 1.5 IB objective of the day but fell just short of the 1 ATR target of 31107 from 30652. The auction stalling in this important zone meant that the supply was coming back aggressively and this led to a retracement of the entire move up post IB as BNF made a OTF (One Time Frame) probe lower making a low of 30885 in the ‘L’ period before closing the day at 30939 leaving a ‘p’ shape profile for the day indicating that the move to the upside was caused more by short covering rather than fresh buying. Although the Value for the day was higher, BNF would need to stay above today’s POC of 30950 and get above the PBH of 31038 to continue higher and on the downside, acceptance below 30950 could lead to a test of 30885 below which the buying tail of 30819 to 30698 could come into play.