Previous day’s report ended with this ‘the auction formed a ‘b’ shape profile for the day with a very prominent POC at 9276 which had 12 of the 13 TPOs aligned together and this balance at new highs with a small excess confirmed from 9337 to 9385 could lead to a probe lower below 9210 with the first objectives being the VPOCs of 9180 & 9050 in the coming session(s).‘

NF moved away from that prominent POC in the form of a big gap down of 229 points as it opened below both the VPOCs of 9180 & 9050 to give an OAOR start after which it made the narrowest IB (Initial Balance) range of just 77 points in almost 2 months. The auction then remained in this range for the next 4 periods forming a small balance typical of the open type but left an important nuance in the ‘D’ period as it confirmed a PBH (Pull Back High) at 9050 which meant that the PLR (Path of Least Resistance) for the day was firmly down. NF then made a RE (Range Extension) in the ‘G’ period as it left an extension handle at 8990 and doubled the day’s range in the ‘H’ period as it made lows of 8912 completing the 2 IB objective after which it made a marginal new low of 8909 in the ‘I’ period but could not extend further indicating that the auction could be forming another small balance lower to complete a DD (Double Distribution) day. The ‘J’ period then made an inside bar as it stayed in a narrow range of 32 points confirming poor trade facilitation in the probe lower and this led to an inventory adjustment spike in the ‘K’ period as the auction got into the DD tail & went on to negate the extension handle of 8990 as it made a high of 9014 tagging the POC of the upper distribution of 9012. However, NF was swiftly rejected from here as it confirmed a lower PBH and got back into the lower distribution for the rest of the day as it built volumes at 8960 before closing the day at 8972. The auction today remained completely inside the Value of the 4-day composite from 9th to 16th April completing the 80% Rule in that well balanced area (Click here to view the MPLite chart) & looks set to move away from here continuing the probe lower once it sustains below today’s low towards the next VPOCs of 8750 & 8450 in the coming session(s). On the upside, the PBHs of 9014 & 9050 would be the immediate references that need to be taken out for any possibility of a bounce coming as we have a big selling tail from 9050 to 9215. 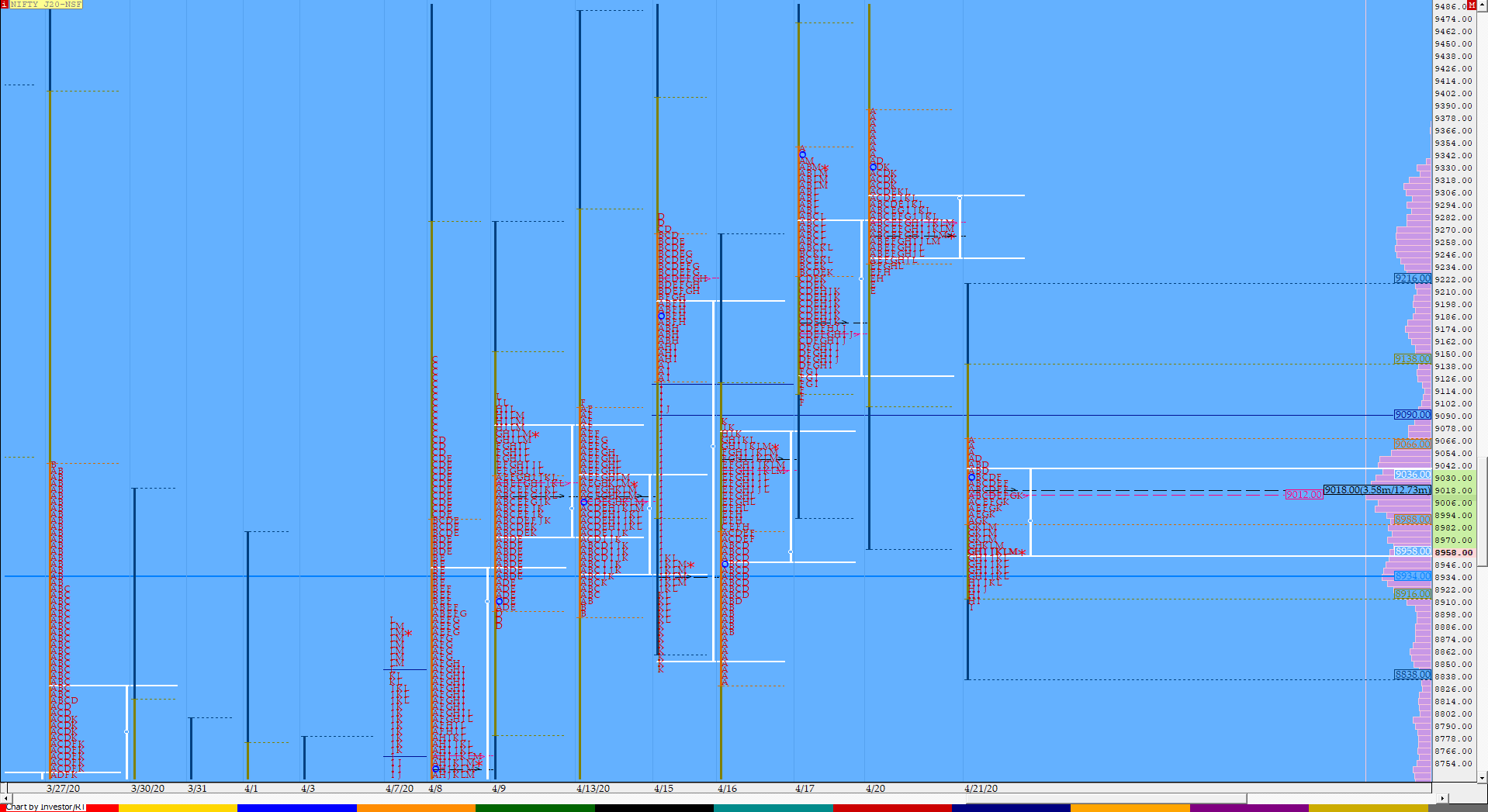 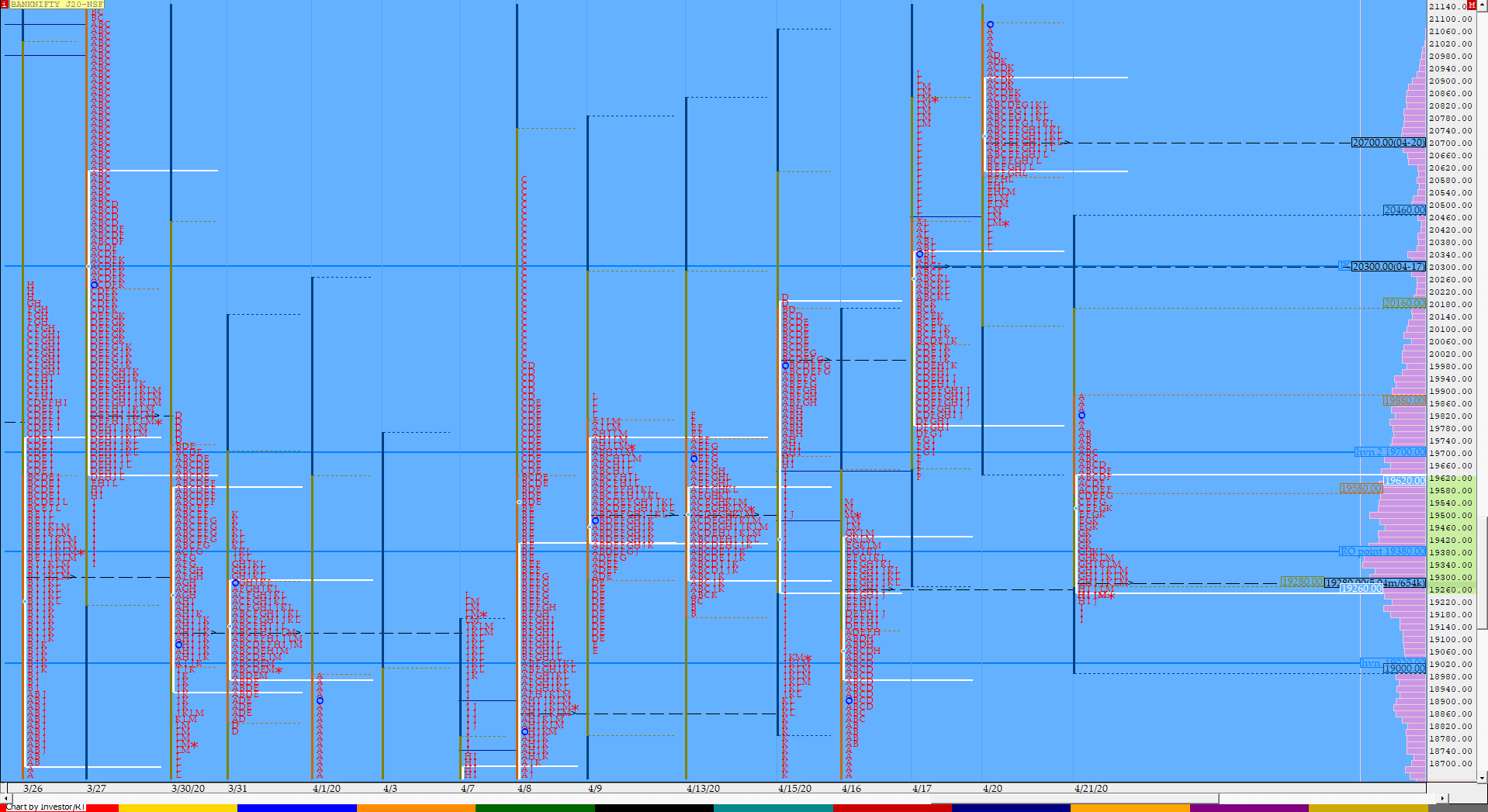 BNF also opened with a big gap down of 657 points as the imbalance it had started at close on previous day in form of a spike continued as it made a high of 19880 in the opening minutes which was also the weekly POC so an important signal that the PLR would continue to remain down. Similar to NF, the auction made a narrow IB range of 292 points but unlike NF gave a C-side extension lower as it made new lows for the day at 19525 and promptly gave a bounce to VWAP where it got rejected in the ‘D’ period. BNF then made a fresh RE lower in the ‘E’ period as it made lows of 19466 almost tagging the 1.5 IB but once again bounced back to VWAP in the ‘F’ period to get rejected for the second time as it left a PBH at 19644 indicating that the supply was getting more dominant. The auction then made a big move lower in the ‘G’ period where it completed the 1.5 IB objective and followed it up with lower lows in the next 2 periods as it tagged the VPOC of 19260 in the ‘H’ period and went on to make lows of 19166 in the ‘I’ TPO. However, this fall of more than 1300 points since previous close seemed a bit stretched resulting in a retracement back to VWAP in the ‘K’ period where BNF confirmed a lower PBH of 19523 before closing the day at 19334 with the DPOC being lower at 19280 which would be the immediate support for the next session. Value for the day was lower & BNF remained in the 5-day composite it had formed from 8th to 16th Apr (Click here to view the MPLite chart) so staying below 19280, it could continue to probe lower towards the composite VAL of 18990 and below it the VPOCs of 18860 & 18810 in the coming sessions.