Previous day’s report ended with this ‘The auction today remained completely inside the Value of the 4-day composite from 9th to 16th April & looks set to move away from here continuing the probe lower once it sustains below today’s low towards the next VPOCs of 8750 & 8450 in the coming session(s). On the upside, the PBHs of 9014 & 9050 would be the immediate references that need to be taken out for any possibility of a bounce coming as we have a big selling tail from 9050 to 9215.‘

NF made an OAIR start and remained in previous day’s Value till the IB (Initial Balance) got over as it made a high of 9013 just below yesterday’s PBH (Pull Back High) of 9014 and a low of 8933 which was just above the PBL of 8930. The second consecutive day of a narrow IB range indicated that we could have another mutiple IB day which got more confirmation with the auction giving a big RE (Range Extension) in the C period as it left an extension handle at 9013 and scaled above PDH (Previous Day High) to enter the big selling tail from 9050 to 9215. NF then made a trending move higher all day as it completed the 3 IB objective of 9174 and even went on to negated the entire tail by making a high of 9220 thus making a technical gap close. The day’s profile resembles a ‘p’ shape indicating that the shorts were forced to cover today with Value also higher but the auction is critically placed just below the Gaussian profile of Monday which has a prominent POC at 9276 which could act as a magnet if NF gets above 9228 in the next session. On the downside, the second extension handle of 9163 would be the immediate support below which today’s POC of 9102 & PBL of 9082 would be on watch and if broken can lead to a test of 9041 & 9013. 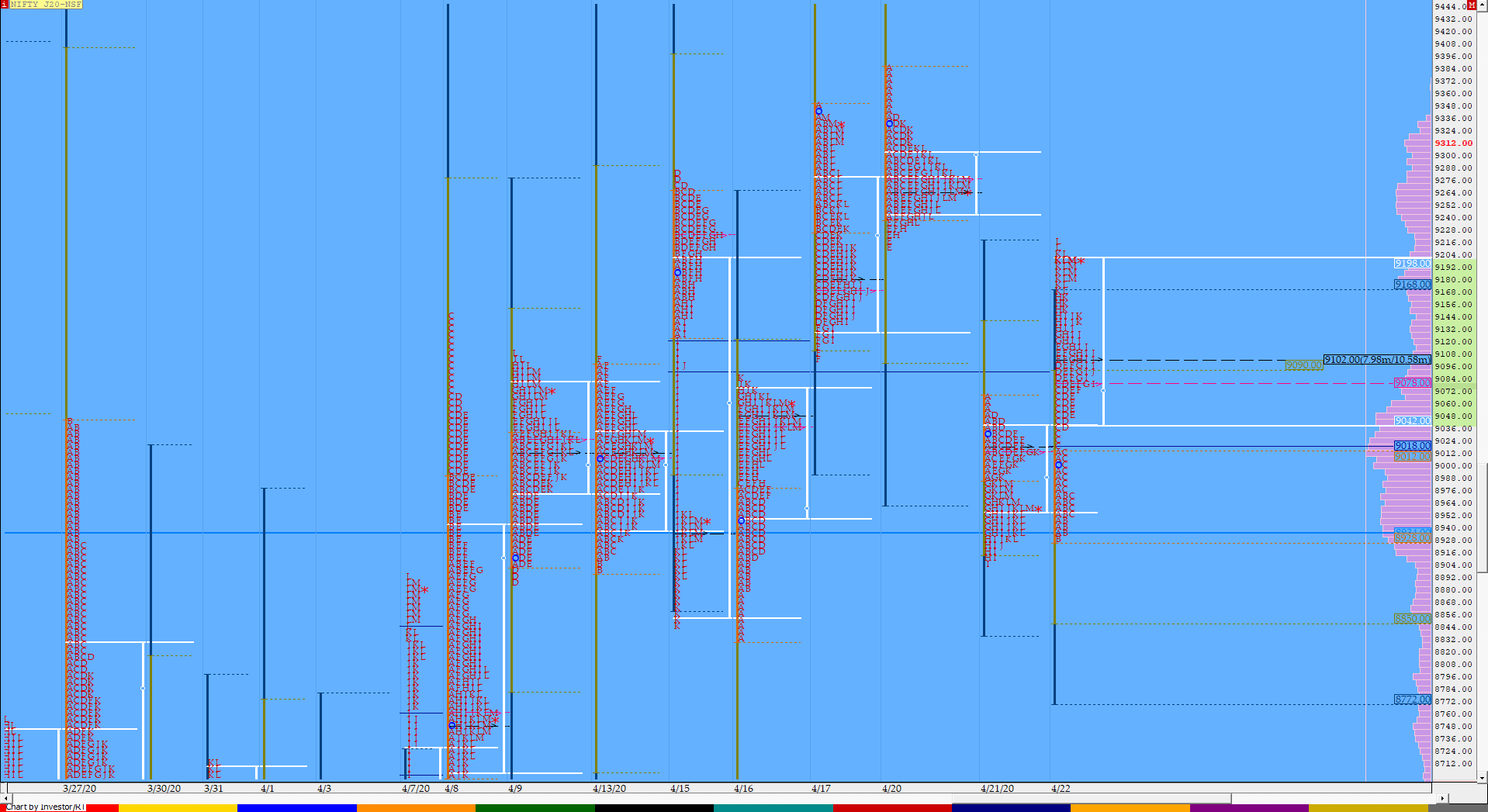 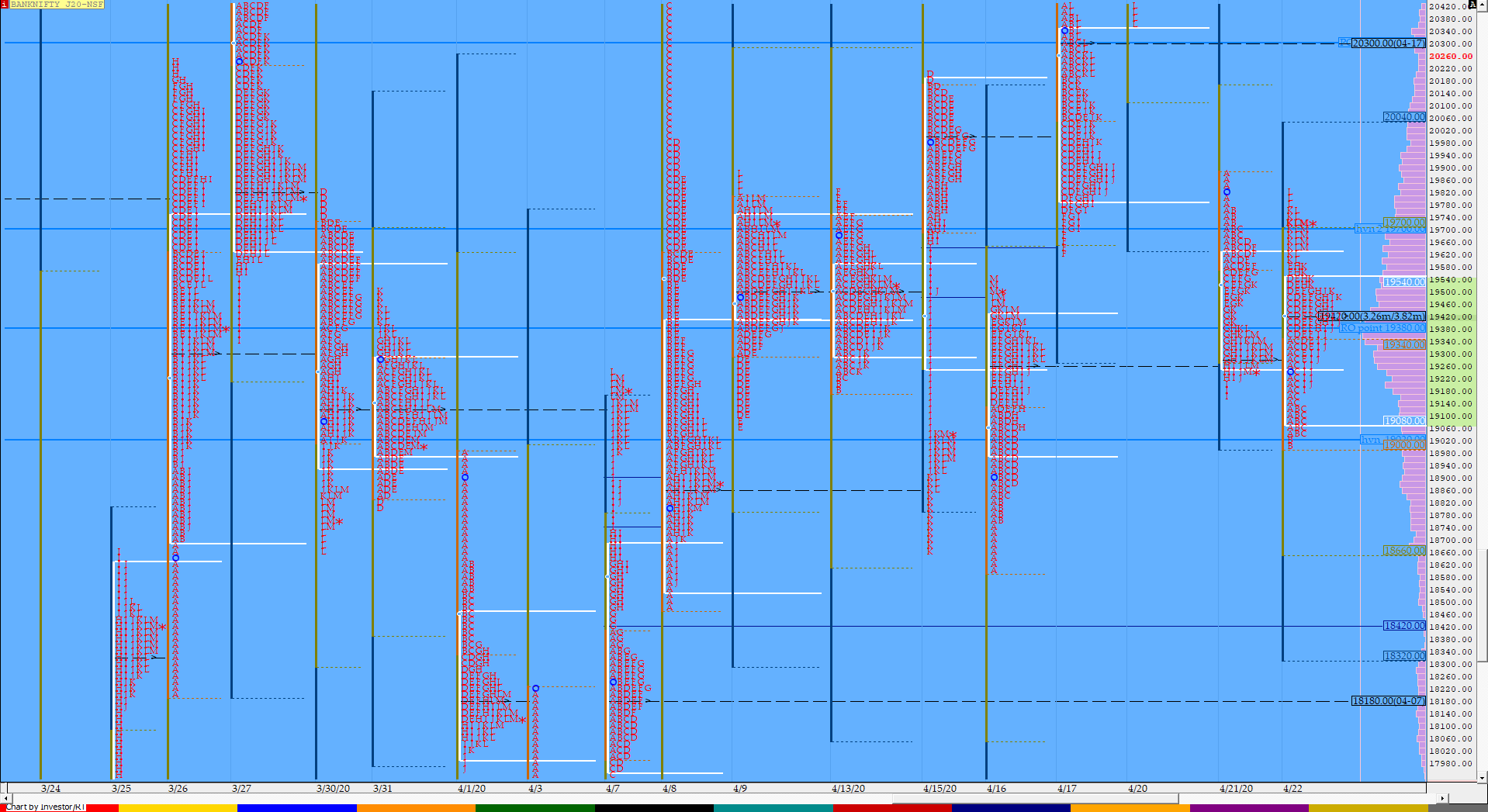 Previous day’s report ended with this ‘Value for the day was lower & BNF remained in the 5-day composite it had formed from 8th to 16th Apr so staying below 19280, it could continue to probe lower towards the composite VAL of 18990 and below it the VPOCs of 18860 & 18810 in the coming sessions‘

BNF opened below 19280 and broke below the PDL as it continued to have a negative bias in the IB making new lows of 19002 in the ‘B’ period where it stalled just above the first objective of 18990 which was a sign that the downside was getting limited. The auction then probed higher as it scaled back above 19280 and went on to make a RE to the upside in the ‘C’ period and continued to make higher highs of 19540 & 19590 in the next 2 periods completing the 1.5 IB target. BNF then stayed in a narrow range till the ‘H’ period where it made almost similar highs of 19580 and not finding fresh demand made a probe below VWAP in the ‘I’ period breaking below the 19280 level but was rejected back above it in the ‘J’ period as it left a PBL at 19184 which meant that new demand has come in & could trigger a fresh leg higher. The auction then made made new highs for the day in the ‘K’ period as it left an extension handle at 19590 and not only completed the 2 IB objective of 19715 but went on to make new highs of 19838 in the ‘K’ period before closing the day at 19677. BNF remained mostly in previous day’s range and so the Value for the day was also overlapping leading to a nice 2-day balance but would need to get above 19880 for a probable move towards closing that gap it has till 20374. On the downside, 19635 & 19590 would be the important references below which 19440 & 19380 could come into play in the next session.