NF opened above the HVN of 11620 & probed higher making a high of 11660 but was bot able to get above PDH settling down with an OAIR (Open Auction In Range) which indicated that the auction could be preparing for a balance after the imbalance of last 2 days which saw NF rising by almost 1000 points. After failing to break above PDH, NF then turned lower as it went on to break below VWAP & the HVN of 11620 giving a quick fall to 11575 just as the ‘B’ period started to leave a IB (Initial Balance) range of 85 points. The auction then continued to remain weak as it stayed below 11620 and even made an RE (Range Extension) to the downside in the E period making new day lows of 11562 and followed it with a lower low of 11557 in the F period but was swiftly rejected as it got back into the IB range and went on to get above VWAP in the ‘G’ period raising the possibility of a FA (Failed Auction) getting confirmed at lows but the upside probe got stalled exactly at the level of 11620. NF made another attempt to get above 11620 in the ‘H’ period but was once again rejected & this led to a rotation down as it got below the IBL in the ‘I’ period but ended up making a higher low indicating that only locals were present in the auction. The ‘K’ period saw NF taking support at the IBL & give a quick move to the upside as it went on to scale above 11620 and tagged high of 11655 stalling just below the day high which meant that this rise was more of an inventory adjustment move which saw the local shorts who were stuck exiting. The absence of new demand meant that the auction had only one way to go in the last 45 minutes & NF came down to test the VWAP & the dPOC leaving an Inside Day & a Gaussian profile with the Value also forming completely inside yesterday’s Value. NF has formed a composite ‘p’ shape profile over the last 2 days with the composite POC at 11599 and could continue to balance in this zone unless it gives a drive away from this POC in the coming session(s). 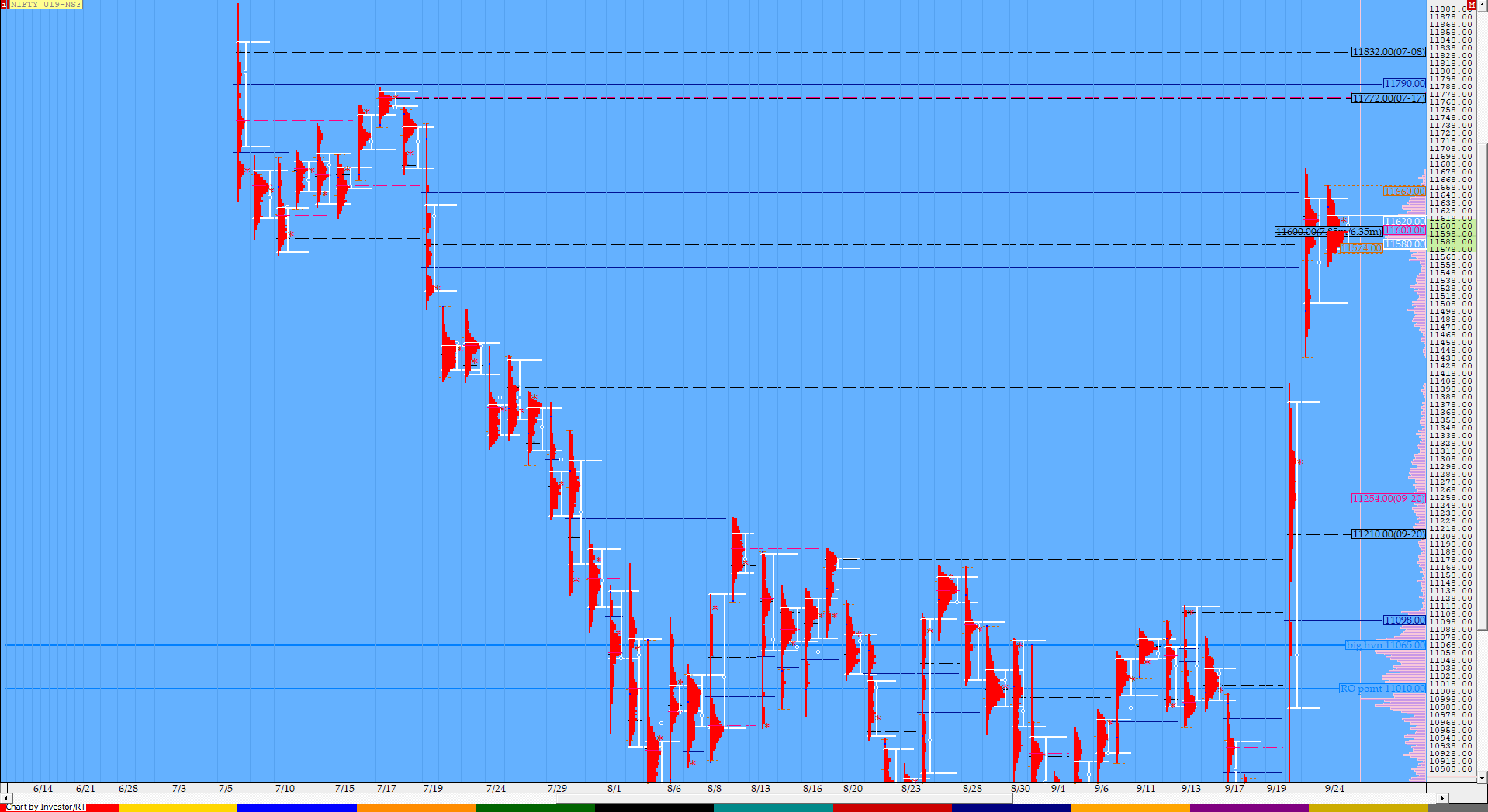 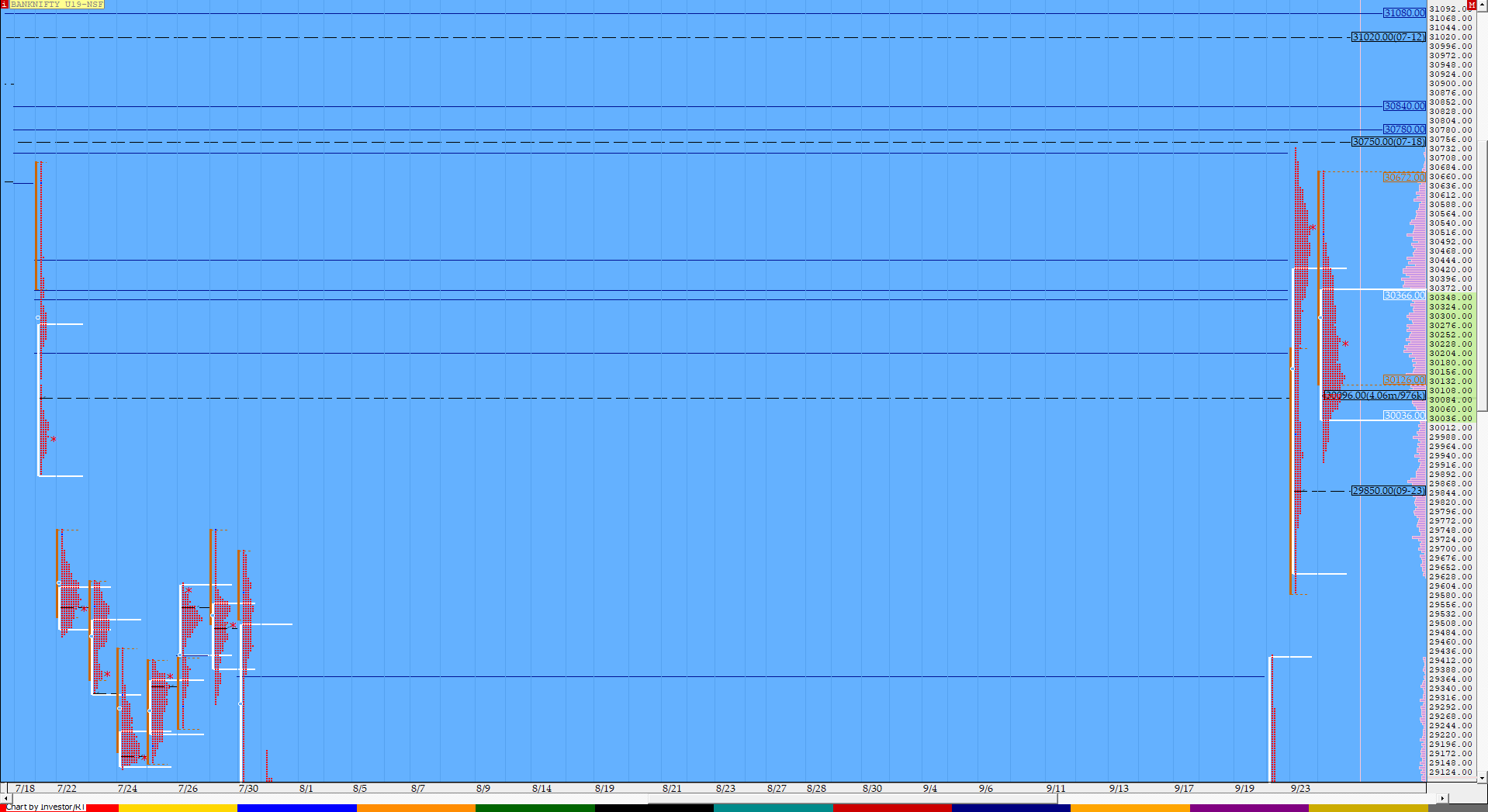 BNF also gave a OAIR start though it made almost a 400 point range in the opening 10 minutes as it broke below the HVN of 30380 at open and went on to make a low of 30287 but was swiftly rejected after which it probed higher to tag 30675 but once again was met with rejection which meant that the auction is turning from imbalance more to a balance. BNF then once again broke below 30380 and went on to make new lows for the day at 30128 in the ‘B’ period leaving a huge 547 points IB Range which also included a selling tail from 30450 to 30675. The auction then consolidated in the ‘C’ period making an inside bar but stayed below VWAP which meant the PLR (Path of Least Resistance) was to the downside and went on to make multiple REs lower in the ‘D’, ‘E’ & ‘F’ periods as BNF made new lows for the day at 29923 and looked set to tag the lower HVN of 29850. The ‘G’ period however stopped the OTF (One Time Frame) move lower since open as it made a higher high of 30325 to test VWAP but was rejected signalling that more downside could be in store. The ‘H’ period then made an inside bar but was once again rejected at VWAP as it made a lower high of 30244 after which BNF probed lower in the ‘I’ period but ended up making higher lows as it left a PBL (Pull Back Low) at 29980 and then a higher PBL of 30041 in the ‘K’ period which indicated that the downside probe is contracting and this led to a big bounce as BNF not only got above VWAP but went on enter the singles at top but was rejected after it left a PBH (Pull Back High) at 30492 and came back to VWAP to give a nice balanced profile for the day which also represented a ‘b’ shape which means long liquidation. The range & value both were inside previous day and the 2 day composite is giving a nice Gaussian profile so will need to check if the auction continues to smoothen the profile by remaining in a balance or gives a fresh move away from here.

(Click here to view the 2-day composite of BNF)