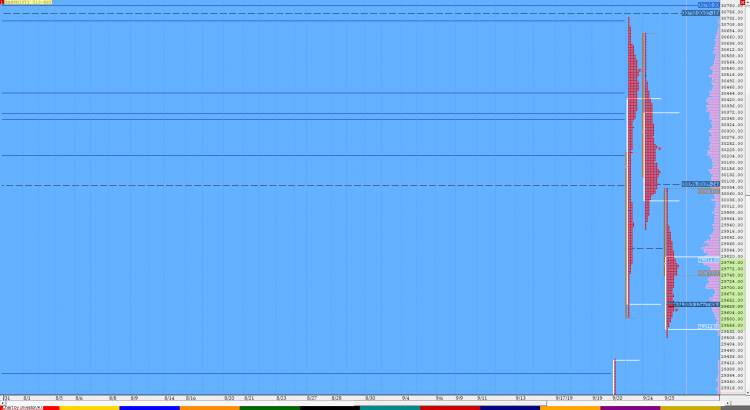 Yesterday’s report ended with this ‘NF has formed a composite ‘p’ shape profile over the last 2 days with the composite POC at 11599 and could continue to balance in this zone unless it gives a drive away from this POC in the coming session(s).‘‘

NF gave an OH (Open=High) start today just below the yPOC of 11599 and drove lower though on lower volumes as it moved away from the 2 day balance breaking below PDL (Previous Day Low) in the first 5 minutes itself setting up the PLR (Path of Least Resistance) for the day to the downside. The auction continued to probe lower in the IB (Initial Balance) as it made a low of 11512 in the ‘B’ period to leave a similar IB range of 85 points as it did yesterday but whereas yesterday the auction was inside previous day’s Value hence there was not much expectation on the range expansion front, today was a different scenario as NF was moving away from balance with an initiative selling tail from 11543 to 11614 and therefore chances were more of getting a good range extension (RE). The RE to the downside happened in the dreaded ‘C’ period as NF made new lows of 11494 but ‘D’ period then made an inside bar getting rejected just below VWAP after which it made fresh REs down in the next 2 periods but made similar lows of 11491 & 11490 suggesting that the probe lower is getting exhausted. The ‘G’ period then stalled the OTF move down since open as it made a higher high for the first time in the day scaling above VWAP but then got rejected just below the morning selling tail to leave a PBH (Pull Back High) of 11539 and this rejection meant that the auction was now ready to move lower. The ‘H’ period then made an inside bar but stayed below VWAP & as it frequently does, the ‘I’ period took over the initiative as it made a fresh RE leaving an extension handle at 11490 and probed lower completing the 1.5 IB move down as it hit lows of 11460 after which the next 3 period made lower lows but remained in a narrow range as NF made lows of 11442 in the ‘L’ period and was looking good for a spike lower into the close but it didn’t happen as most probably some demand was coming in at the weekly gap zone. The auction made a small balance below the extension handle of 11490 which will be the immediate supply point & closed around the HVN of 11465 giving a Double Distribution profile with lower Value and a tail at top. Acceptance below 11465 would made NF weaker for more downside whereas taking out the extension handle of 11490 would open up higher levels of 11512 & 11540. 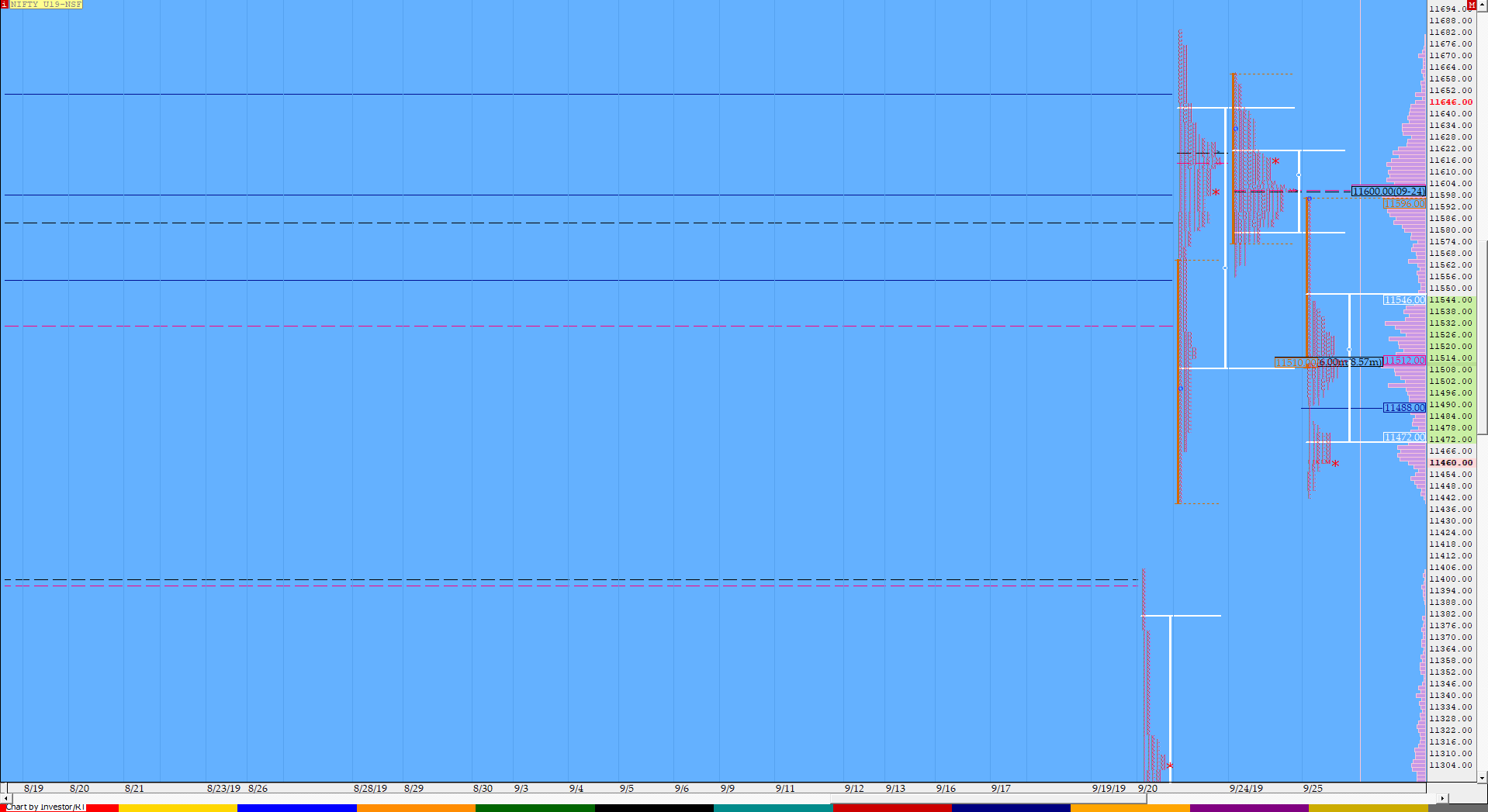 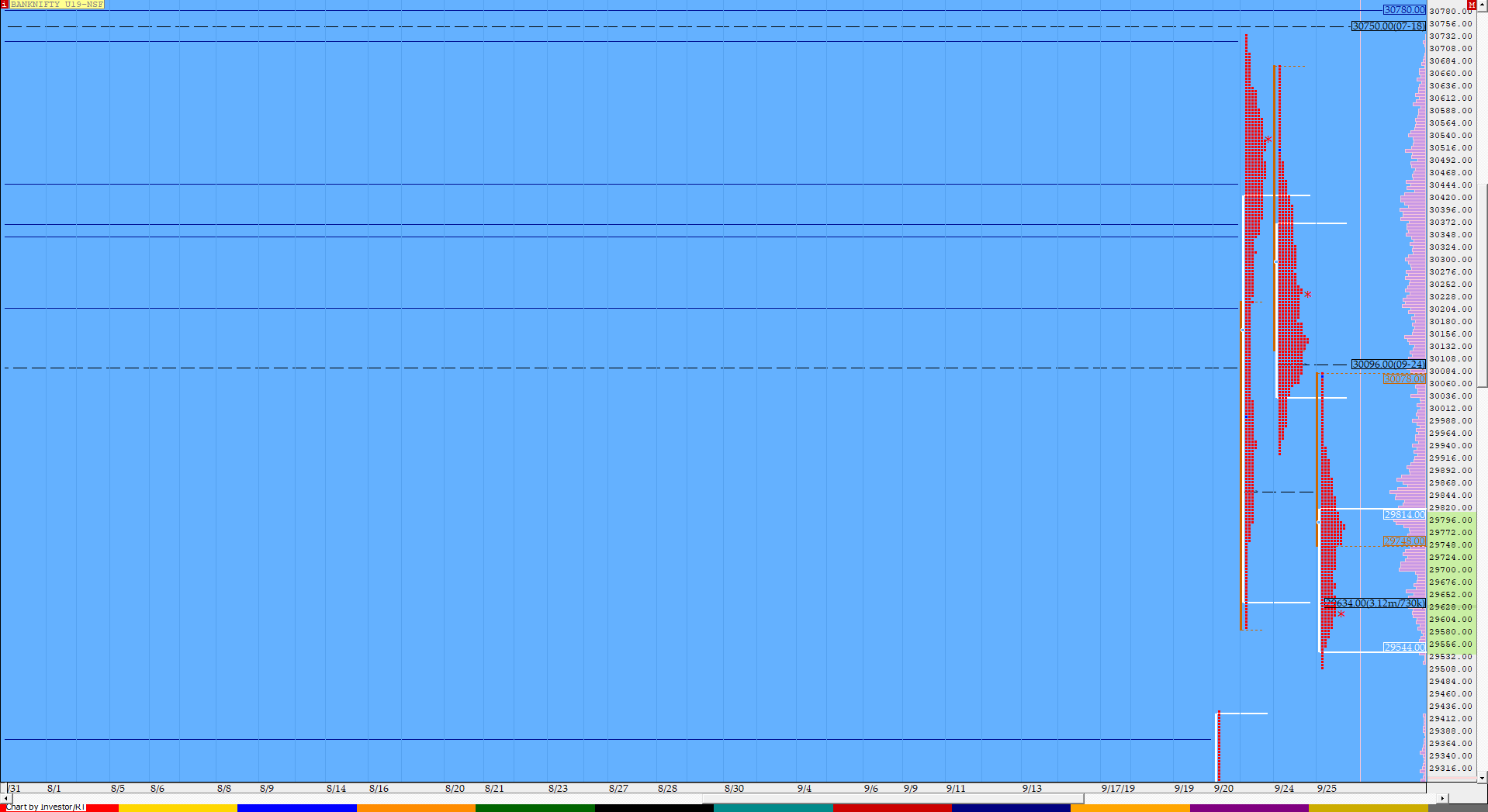 BNF also gave an initiative move away at open as it not only opened lower getting rejected just below the yPOC of 30096 and like in the case of NF, broke below the PDL in the first 5 minutes itself setting up the tone for a good move lower as it made a low of 29753 in the ‘A’ period. The ‘B’ period remained in a narrow range confirming a selling tail from 29877 to 30250 in the IB after which the auction made a RE to the downside in the C period making lows of 29664 but did not extend it further in the next 3 periods which were all inside the range of ‘C’ indicating short term exhaustion in this probe down. The ‘F’ period moved higher breaking above this contracting range which was followed by a big move in the ‘G’ period as BNF got above VWAP & got into the selling tail but was rejected around the PDL as it left a pull back high of 29940 which meant the auction is now ready for new lows. BNF then made an inside bar in the H period but broke lower in the I period making new lows for the day & followed it with lower lows in the next 2 periods tagging 29511 in the ‘K’ period and went on to make an outside bar in the period as it made highs of 29685. BNF closed the day around the HVN of 29630 leaving a ‘b’ shape profile with lower value so the PLR remains down below this HVN.