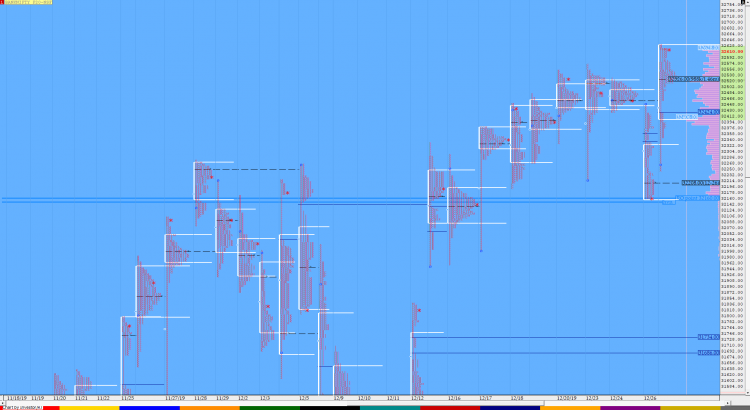 NF opened higher right at the spike high of 12231 and probed lower as it stayed inside the spike zone but took support above the HVN of 12195 while making a low of 12209 from where it reversed the probe and went on to get above the spike high and even tagged the Trend Day VWAP of 12244 in the ‘A’ period itself which was a signal that the PLR (Path of Least Resitance) has turned ‘Up’. The auction then left an extension handle at 12253 as it made a big ‘C’ side RE (Range Extension) scaling above PDH (Previous Day High) and completing the 1.5 IB objective of 12275 as it made highs of 12288. This imbalance to the upside continued till the ‘J’ period as NF made a high of 12310 after which it gave the typical inventory adjustment dip to VWAP as it left a PBL (Pull Back Low) at 12278 in the ‘L’ period which was also the PDH and rejection from there triggered a fresh move to the upside in the form of a spike close from 12310 to 12330 and in the process tagged the VPOC of 12327. Spike Rules will come into play at open for the next session with the FA (Failed Auction) of 12346 the next reference on the upside along with the PBL & today’s VWAP of 12278 being the important level to watch in case of any dip. 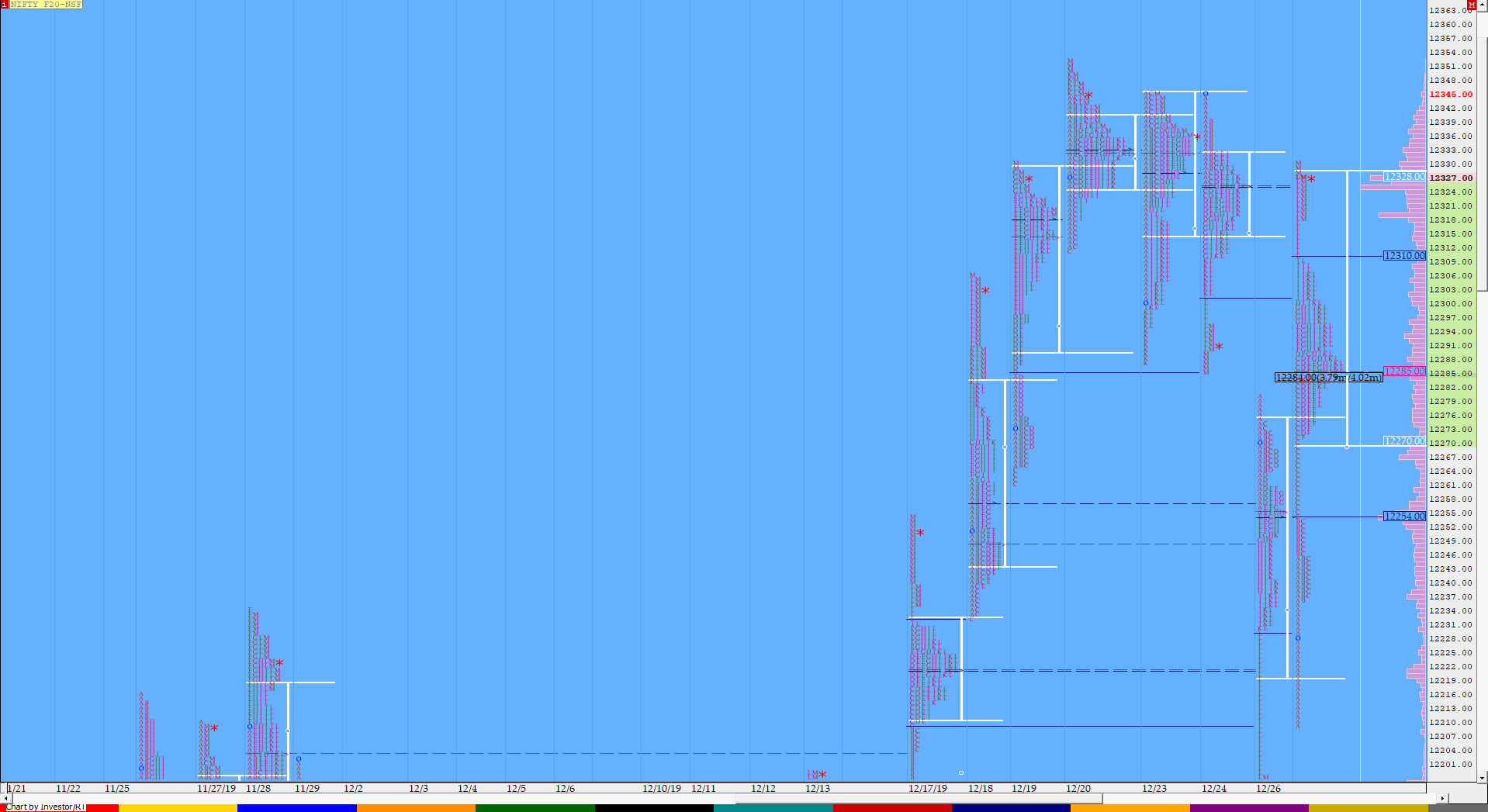 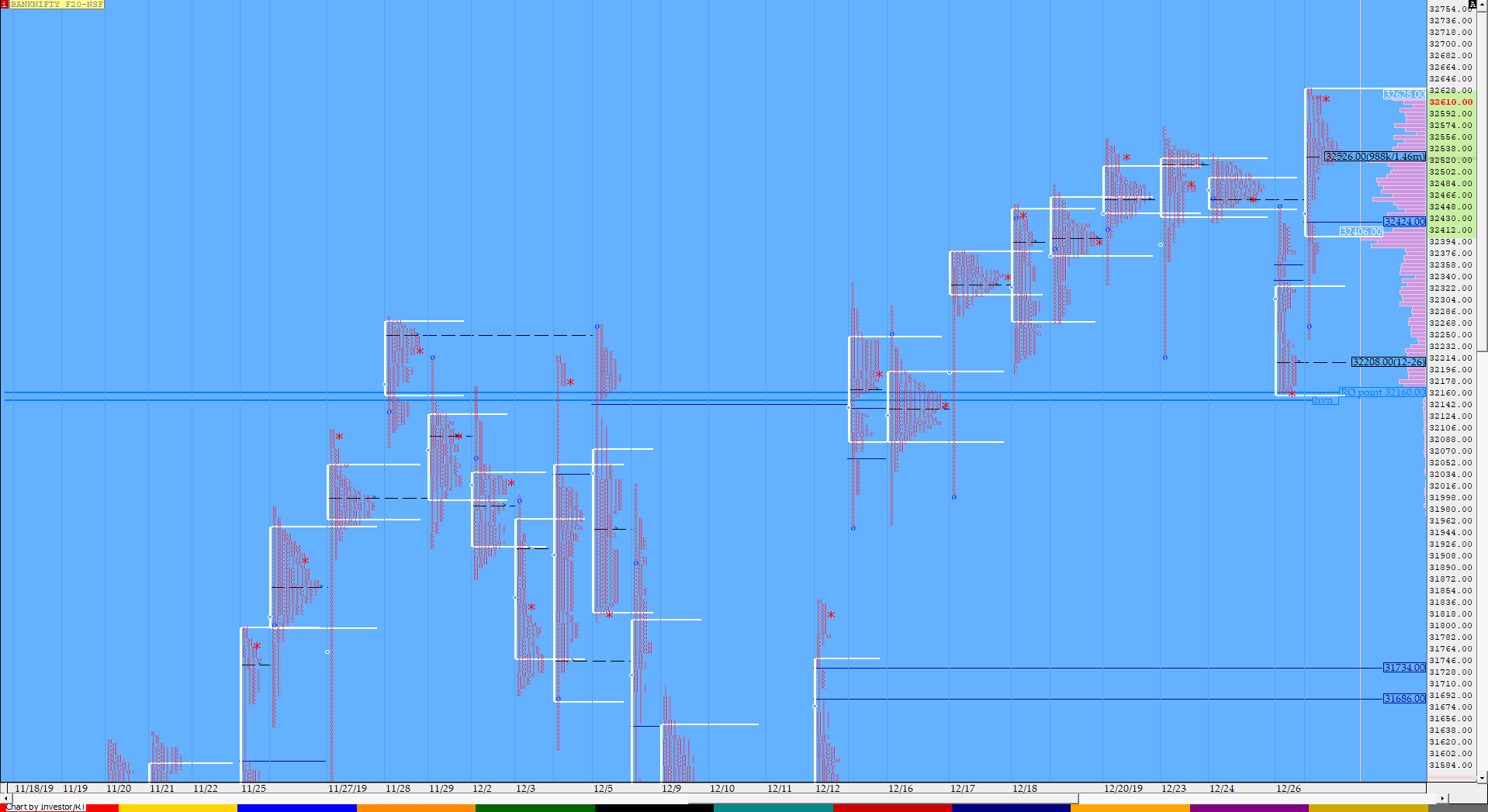 Previous day’s report ended with this ‘The dPOC of 32210 would be the first reference on the upside above which the combo of the PBH & the day’s VWAP of 32253 & 32281 would be the important levels going forward for the new series.‘

BNF opened with a gap up much above the dPOC of 32210 which was a strong signal and gave more confirmation with an almost OL (Open=Low) start at the PBH of 32253 as it went on to scale above the previous day’s VWAP of 32281 in the opening minutes itself which set up the day for a good up-move. The auction then left a buying tail from 32348 to 32246 in the IB (Initial Balance) and like the NF made a strong ‘C’ period RE to the upside as it left an extension handle at 32421 to scale above the PDH and continued to probe higher making new all time highs of 32618 in the ‘I’ period completing the 2 IB move and in the process negated the FAs of 32529 & 32569. BNF then left a PBL in the ‘L’ period at 32514 before making marginal new highs of 32634 as it spiked higher into the close and is in completely uncharted territory for now.