Previous day’s report ended with this ‘The weekly profile which started with ‘p’ shape on the first 2 days is slowly turning into a more balanced profile as the 4 day composite can be seen at the below link so will need to see if the auction moves away from this prominent composite POC of 11630 in the coming session(s) or continues to build Value around it. ‘‘

NF opened lower away from the composite POC of 11630 and made a low of 11577 in the opening minutes but did not find any new supply & reversed the probe to the upside negating the gap open as it went on to tag the yPOC of 11631 while making a high of 11646 in the ‘A’ period. The auction needed to move away from this POC on big volumes which was not happening as the ‘B’ period stayed below this level making an inside bar with the narrowest IB range for the week which suggested that there could be a good range & volume expansion later. NF then probed lower for the next 3 periods and made an attempt to break below the IBL just as the ‘D’ period was ending as it made a new day low of 11570 and followed it up with a new low of 11565 at the start of the E period but could not attract new sellers and this failed look down meant that the auction now needed to probe to the upside to find new buyers. NF then made a slow OTF (One Time Frame) move to the upside as it got above VWAP & made higher highs for the next 5 periods scaling above the 11630 yet again as it made a high of 11639 in the ‘J’ period but once again could not attract fresh buying indicating that there was only locals who were present and looked like the big players were not yet ready to enter. The failure to sustain above 11630 then led to an inventory adjustment move as NF made a quick probe to the downside negating the move up from the lows of the day as it made similar lows of 11567 in the ‘K’ period but once again could not stay below the IBL as the last 2 periods made narrow range inside bar closing the day at 11579 which also was an inside day with a narrow range of just 81 points which was the least in the last 7 days leaving a nice balanced profile with poor lows. On the weekly front, NF has made a nice Gaussian profile (read the weekly report here) and could give a move away from here in the coming session(s). 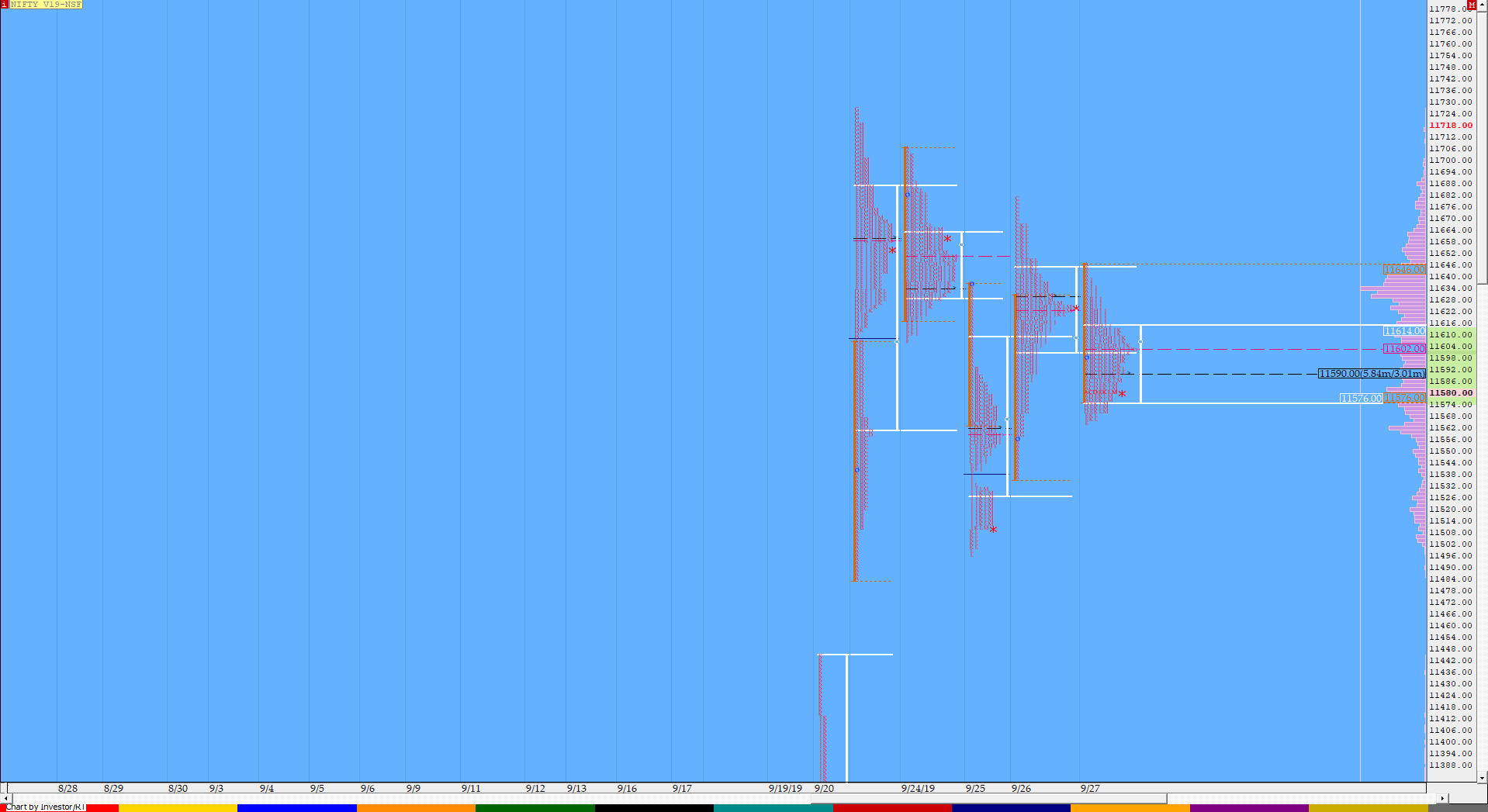 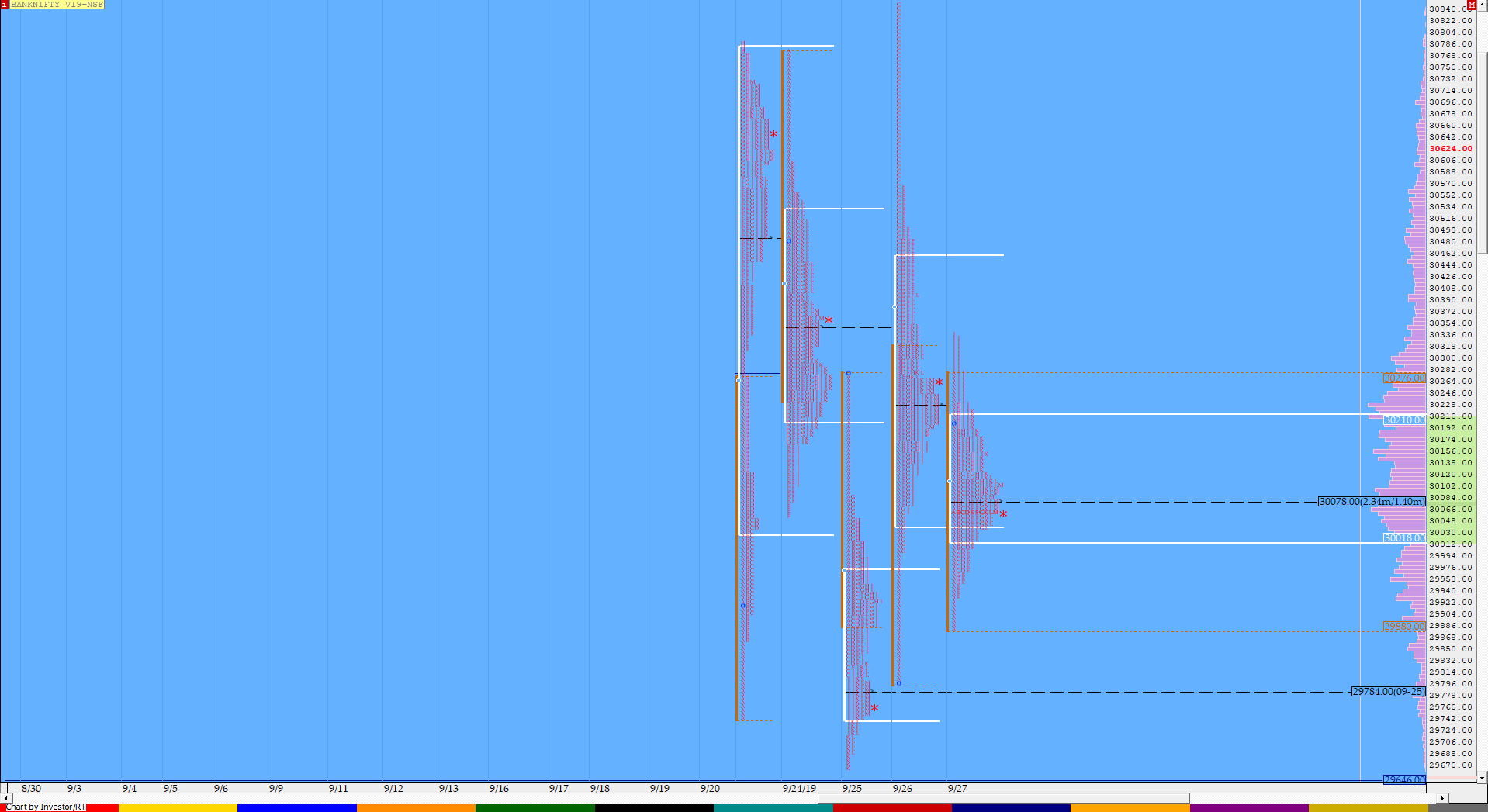 BNF made an OH (Open=High) start at 30201 and made a fast probe lower as it got into the buying tail of 30001 to 29750 while making a low of 29883 in the first 10 minutes but was swiftly rejected as it went on to scale above the OH level and made new highs of 30280 in the ‘A’ period leaving a pretty large 397 point range in the first 30 minutes. The auction then remained in this range till the ‘H’ period as it first made a slow rotation to the downside till the ‘E’ period where it left a PBL (Pull Back Low) of 29928 from where it reversed to probe higher as it made highs of 30229 in the ‘H’ period. The ‘I’ period then made a RE (Range Extension) to the upside making new day high of 30330 & followed it up with a higher high of 30340 in the ‘J’ period but could not find new buyers hence did not sustain the new highs and reversed into the close breaking below VWAP  & making a low of 30022 before closing around the dPOC of 30070 leaving an inside bar on the daily with a Gaussian Profile. Like in NF, BNF has also formed a nice weekly balance & the same could be seen below so will need to see if the auction continues to build Value here or gives a move away in the coming week.

(Click here to view this week’s action in Oct BNF)