Previous day’s report ended with this ‘NF has immediate support in form of the buying tail from 9280 to 9230 which if held would mean that the PLR for the week would be on the upside. However, the auction would need to take out the level of 9385 on good volumes for a probable move to the 1 ATR objective of 9402 & the HVN of 9432 of 16th March‘

NF opened with another gap up which was also an OH (Open=High) at 9379 once again stalling just below that 9385 indicating good supply coming in which led to a quick & big move lower in the IB (Initial Balance) as the auction not only completed the 80% Rule in previous day’s Value and in the process breaking below the prominent POC of 9340 but also went on to test the buying tail of 9280 to 9230 as it made lows of 9257 in the ‘B’ period. The ‘C’ period however made a narrow range inside bar displaying exhaustion of the probe lower as NF stayed above the weekly POC & HVN of 9270 leading to a retracement to VWAP in the following periods as it attempted the 80% Rule on the upside but was getting stopped below the yPOC of 9340. The auction then left a PBL (Pull Back Low) at 9275 in the ‘G’ period and the failure to make a RE (Range Extension) lower inspite of the ORR (Open Rejection Reverse) start meant that the sellers were doing a bad job and once NF took out that prominent POC of 9340 in the ‘H’ period, it triggered a trending move higher for the rest of the day as it made a marginal RE higher in the ‘J’ period tagging 9385 after which it took a pause in the ‘K’ period mostly absorbing all the supply which was coming in and then ended the day with a spike completing the 1 ATR objective of 9402 but falling just short of the HVN of 9432. Spike rules will be in play for the next open & the reference would be 9385 to 9421. The 2-day composite of this week (Click here to view the MPLite chart) so far is forming a nice 3-1-3 profile so would be interesting to watch if NF gives a move away from here for the expiry or continues to form a balance in between the 2 tails. 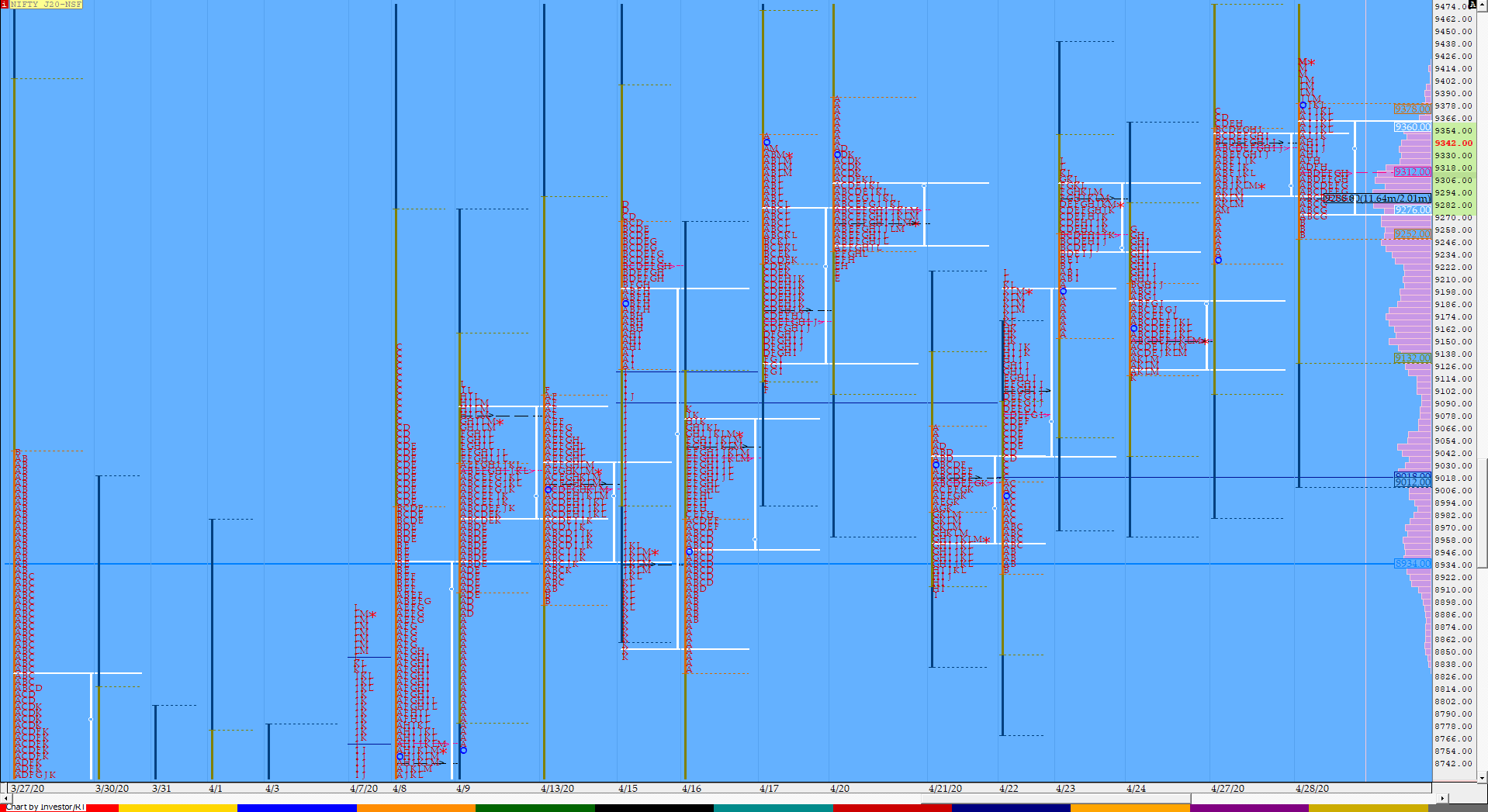 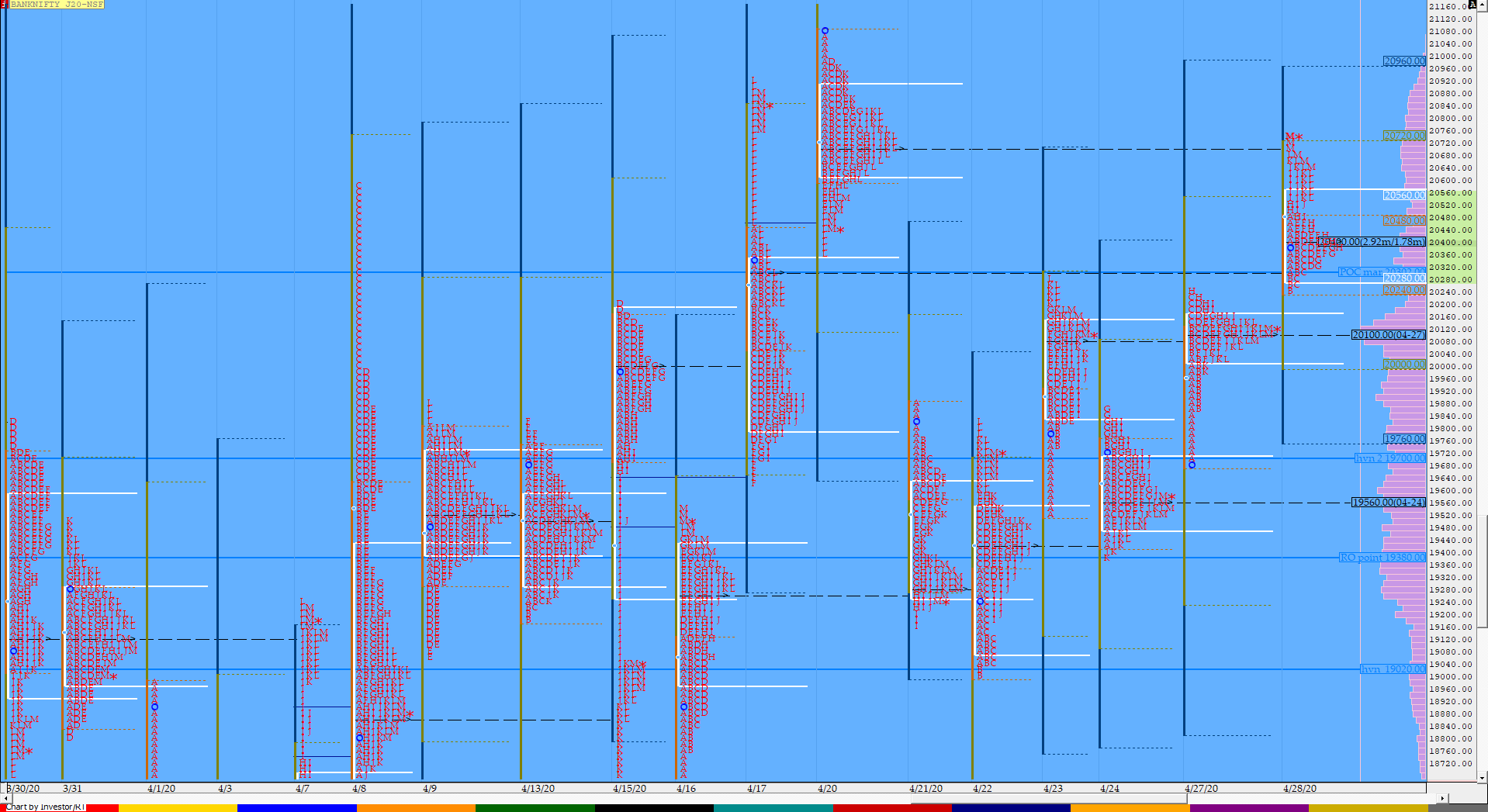 BNF also opened with a gap up just above the 1 ATR objective of 20387 and continued to remain strong as it made highs of 20490 in the first 15 minutes after which it settled into an OAOR (Open Auction Out of Range) breaking below VWAP and went on to make new lows in the ‘A’ period itself. The auction then continued to probe lower in the ‘B’ period but took support at 20242 just above PDH (Previous Day High) and this was an important signal for the rest of the day. BNF then played out the typical OAOR narrow range balance formation till afternoon where similar to NF, it confirmed a PBL (Pull Back Low) in the ‘G’ period at 20329 leading to multiple REs to the upside as the auction left an extension handle at 20526 and continued the OTF (One Time Frame) move higher as it tagged the VPOC of 20700 leaving a spike close from 20685 to 20749 which would be the reference for the next open.