NF opened in the spike zone of 12151 to 12117 and made an attempt to break lower as it made lows of 12091 in the opening 10 minutes but was swiftly rejected as it not only got back into the spike zone but went on to scale above it in the ‘A’ period itself and made new highs of 12162 just as the ‘B’ period started but just like it got rejected from below the spike, the auction was not able to sustain above it and got back into the spike zone. NF then remained inside the IB (Initial Balance) and within a narrow range of 50 points forming a nice balance till the ‘I’ period filling up and forming Value in the previous day’s low volume area and once it completed this objective, the auction made a RE (Range Extension) to the downside in the ‘J’ period as it left an extension handle at 12091 and went on to make lower lows for the next 2 periods as NF tagged the VPOCs of 12062 & 12045 while making lows of 12038 before leaving a small tail at lows from 12053 to 12038 as it closed the day at 12068 forming lower Value for the second consecutive day this week. The extension handle of 12091 would be the reference to be taken out on the upside for a test of 12120-132 but the PLR (Path of Least Resistance) remains to the downside unless NF forms overlapping or higher Value in the coming session(s). 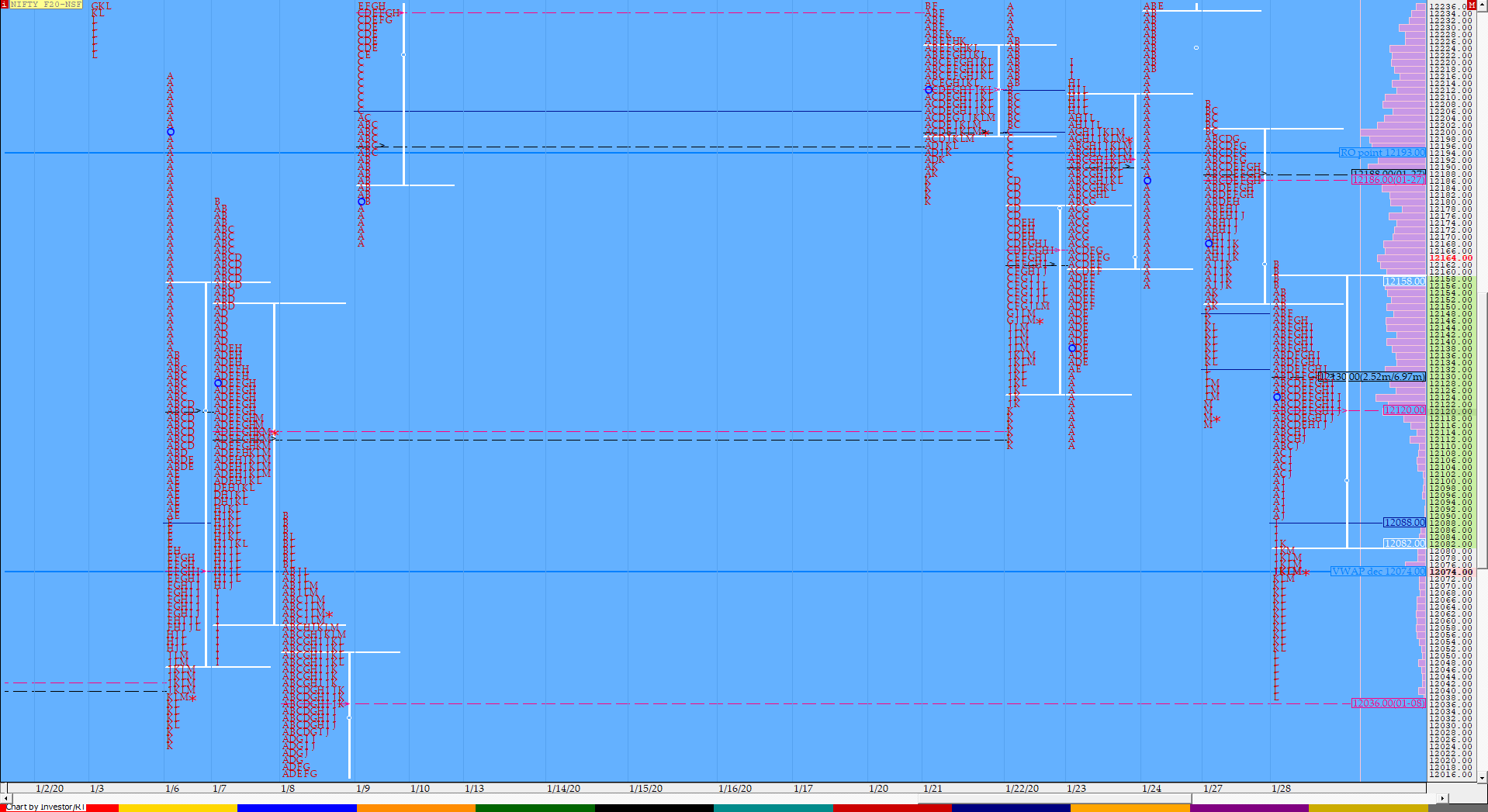 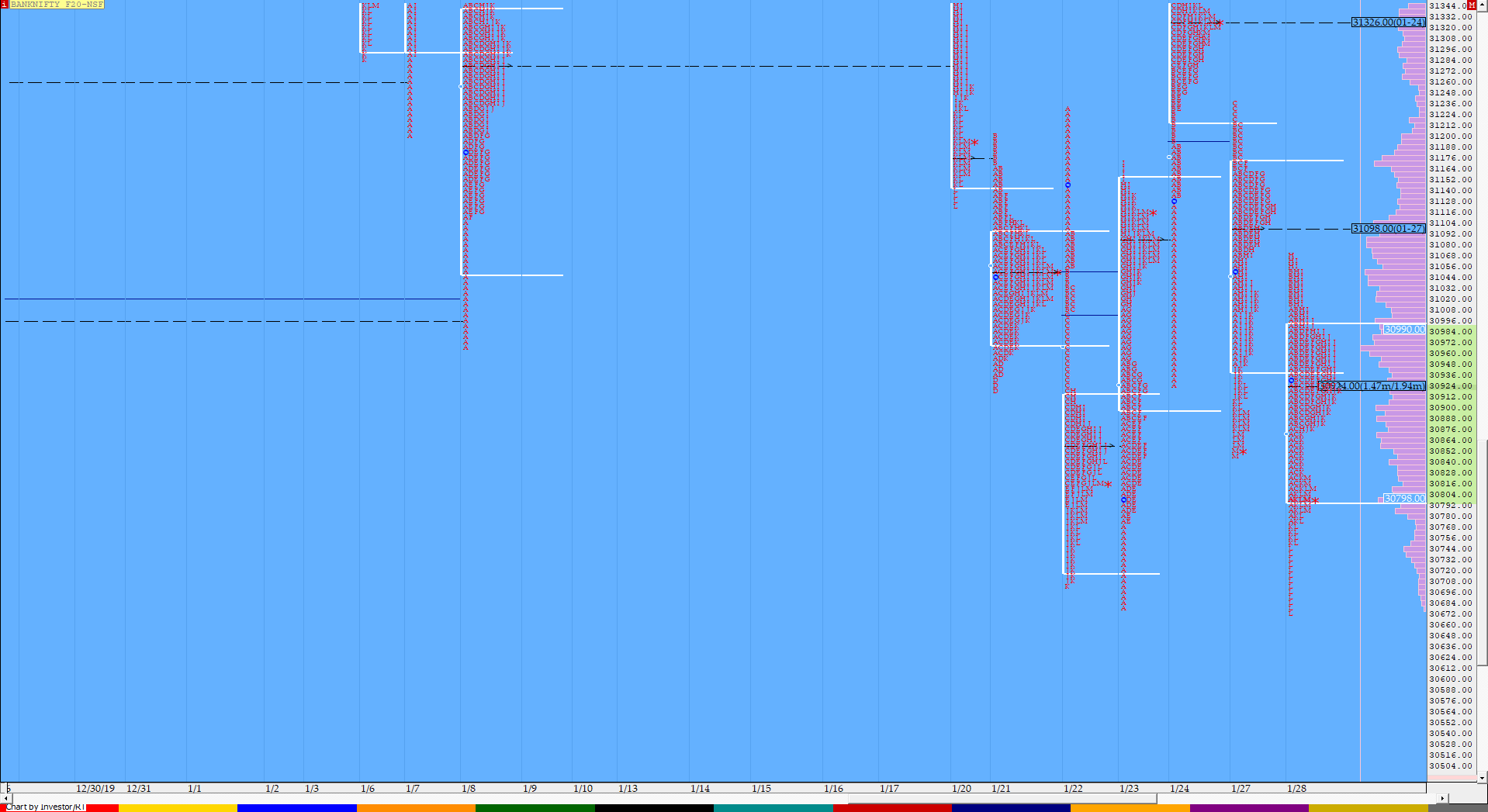 BNF tagged the 1 ATR objective of 30782 from previous day’s FA (Failed Auction) of 31240 at open as it made lows of 30775 and having met this target it gave a good bounce as it got back above the reference of 30850 to 30950 entering into previous day’s Value and even got above the HVN (High Volume Node) of 30984 looking set to tag the yPOC of 31100 when it made a high of 31051 in the IB (Initial Balance). However, the auction did not find any new demand and almost retraced this entire move up in the ‘C’ period as it made lows of 30810 from where it was once again pushed back swiftly into previous day’s range after which it stayed in a small range of 105 points from 30880 to 30985 for the next 4 periods. The ‘H’ period then saw some new action as BNF broke out of this narrow range and even went on to make a RE to the upside as it made new highs for the day at 31070 but once again found no new demand at these levels which led to a swift rejection back into the IB in the ‘I’ period followed by the break of VWAP in the ‘J’ period. The late afternoon break of VWAP generally leads to big liquidation and with a failed RE attempt the move can be even more swift as was seen in the next 2 periods when the auction made a successful RE to the downside in the ‘K’ period confirming yet another FA at 31070 and followed it up by a lower low in the ‘L’ period as it made lows of 30675 falling just short of the 1 ATR objective of 30636 from today’s FA. BNF gave a good bounce into the close as it tagged 30825 closing near the HVN of 30800 which would be the immediate reference for the next session.