Previous day’s report ended with this ‘Spike rules will be in play for the next open & the reference would be 9385 to 9421. The 2-day composite of this week so far is giving a nice 3-1-3 profile so would be interesting to watch if NF gives a move away from here for the expiry or continues to form a balance in between the 2 tails.‘

NF opened in the spike reference but left a buying tail in this zone from 9399 to 9435 in the IB (Initial Balance) as it made new highs for the week at 9458 indicating that it wanted to move away from the 2-day balance with the narrowest IB range for this series of just 59 points hinting at a possibility of multiple IB day. The auction then made a C-side extension and promptly gave a dip to the VWAP but stayed above the morning singles which meant that the PLR (Path of Least Resistance) was still to the upside. NF made another RE (Range Extension) attempt in the ‘E’ period but could only made a marginal new high indicating that supply coming in but once again the dip to VWAP in the ‘F’ period was defended as it left a PBL (Pull Back Low) at 9451 which meant that the demand was overpowering the supply. The ‘G’ period then gave the big move higher as it left an extension handle at 9469 and completed the 1.5 IB objective followed by a higher high in ‘H’ and an outside bar in the ‘I’ period which confirmed a higher PBL of 9476. The auction then made a fresh RE in the ‘J’ period leaving the second extension handle for the day at 9504 confirming that the buyers were still in complete control as it tagged the 2 IB target and did one notch higher in the ‘K’ period where it completed the 3 IB move of 9575. NF continued this imbalance in the ‘L’ period also as it hit 9595 but saw some good profit booking in the last 30 minutes as it closed the day at 9549 leaving a small tail at top from 9577 to 9595. The day’s profile was a trending one though the close was away from the highs but the PLR for the expiry day remains to the upside with today’s POC & VWAP of 9489-9486 being the important level to hold. 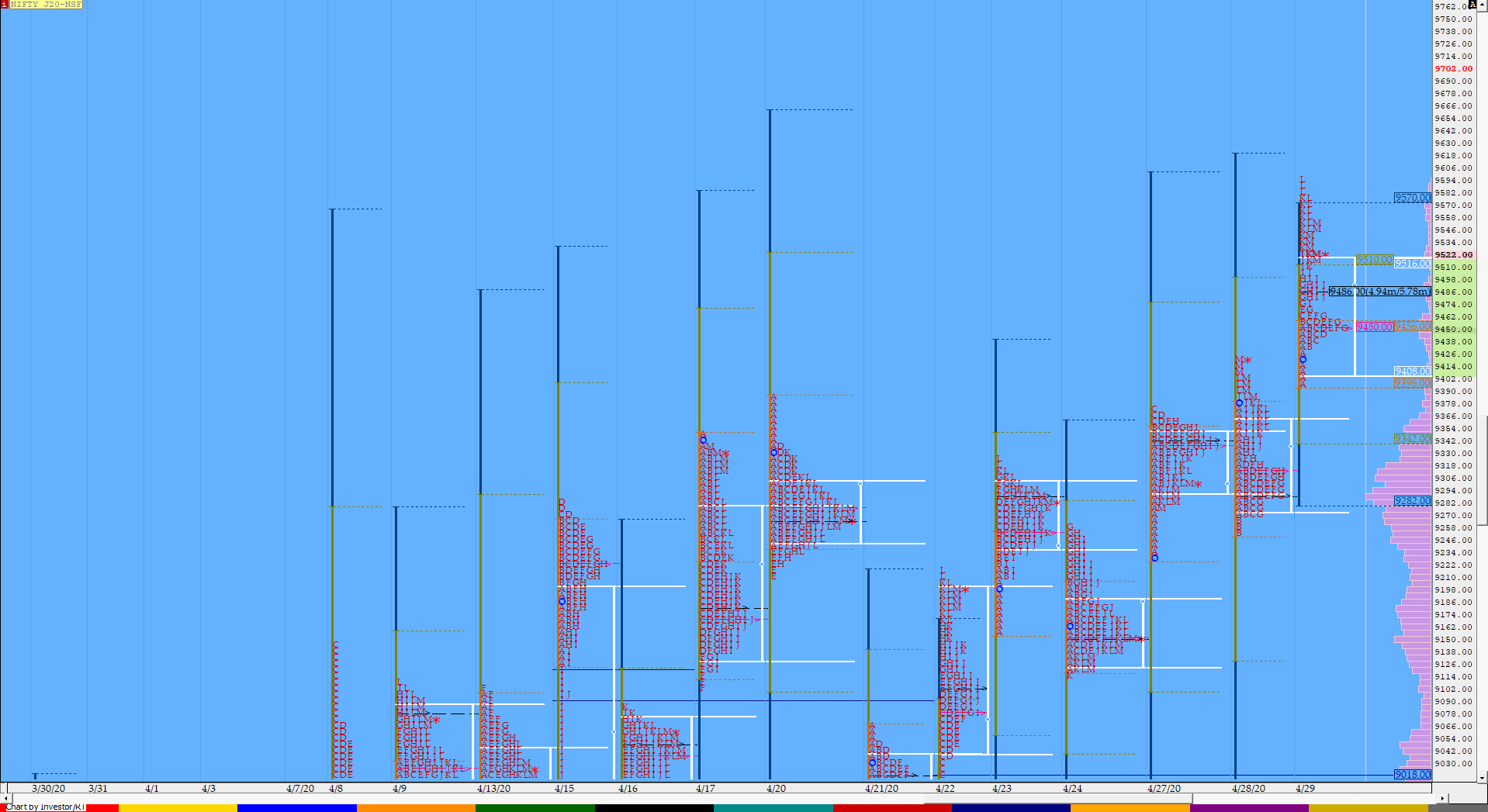 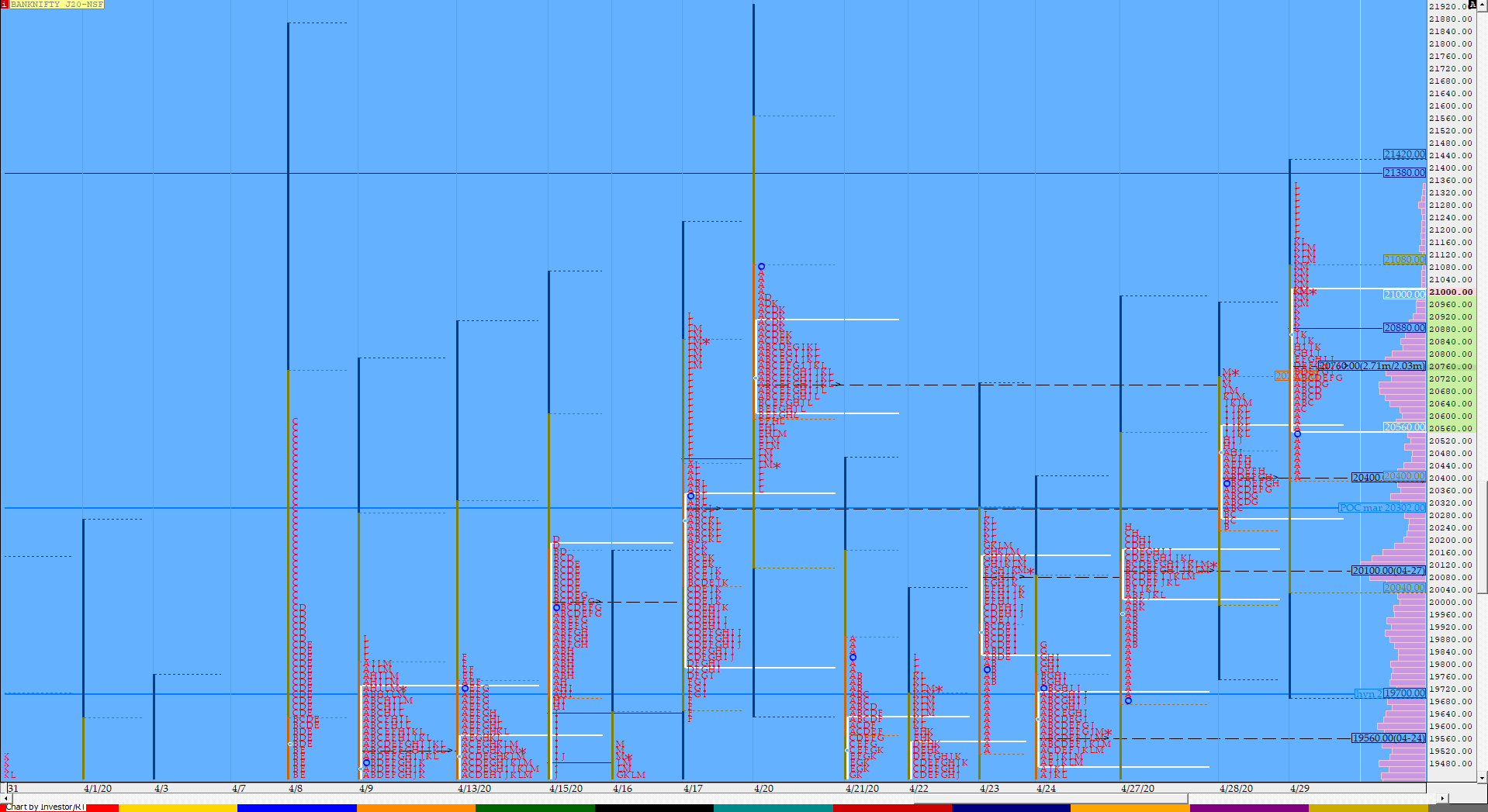 BNF opened with a gap down at 20540 much below the spike reference of 20685 to 20749 which was a weak signal as it continued to probe lower where it made lows of 20401 stalling right at the yPOC and getting swiftly rejected which was the first important nuance it gave. The auction then went on to get back into the spike zone as it made a high of 20745 in the IB and similar to NF, left a buying tail from 20650 to 20401 which was the next confirmation it gave indicating that the PLR had now changed to the upside. The C period then did give a false move which it is so used to giving as it broke below the VWAP and got into the buying tail but was rejected as it ended up leaving a PBL at 20622 which would be the new reference for the day. BNF then made a slow OTF (One Time Frame) move higher till the ‘J’ period with another higher PBL of 20710 it confirmed in the ‘G’ period but was still not able to tag the 1.5 IB objective of 20917 which was a cause of concern as it suggested that the supply was still persisting. The auction then made a lower low of 20740 in the ‘J’ period and this rejection at the PDH (Previous Day High) got new demand in leading to a monster move over the next 2 periods leaving an extension handle at 20875 as all the sellers were taken to the cleaners with BNF making a high of 21360 almost tagging the 2 ATR target from that FA of 19318 in just 3 days. The closing 30 minutes saw big liquidation happening along with some late trapped longs running for cover as BNF made a retracement to 20974 before closing the day at 21128 leaving an excess from 21163 to 21360. Value for the day was higher and we have an elongated profile so the PLR remains up as long as the extension handle of 20875 & today’s VWAP of 20866 is held.