NF started the day with an Open Test Drive higher as it moved away from yesterday’s POC of 12240 and went on to scale above the important zone of 12274-12278 in the Initial Balance (IB) itself where it left a buying tail from 12263 to 12244 which confirmed the presence of Initiative Buyers. The auction then made a ‘C’ side range extension (RE) and did seem like was getting rejected as it was unable to stay above the IBH but then the ‘D’ period made an inside bar which meant that the sellers were not doing a good job or the buyers were in much greater control and this led to a one time frame (OTF) probe higher all day as NF gave an extension handle at 12292 and made multiple REs negating the FA of 12313 in the process and leaving a pull back low (PBL) right at that level in the ‘J’ period. The auction went on to tag the vPOC of 12332 after it left a second extension handle of the day at 12304 and went on to make highs of 12344 before closing the day at 12339 giving the First Trend Day of 2020 leaving an elongated profile with higher & wider Value. The dPOC for the day was at 12320 which will be an important reference along with today’s VWAP of 12307 in the coming session(s). 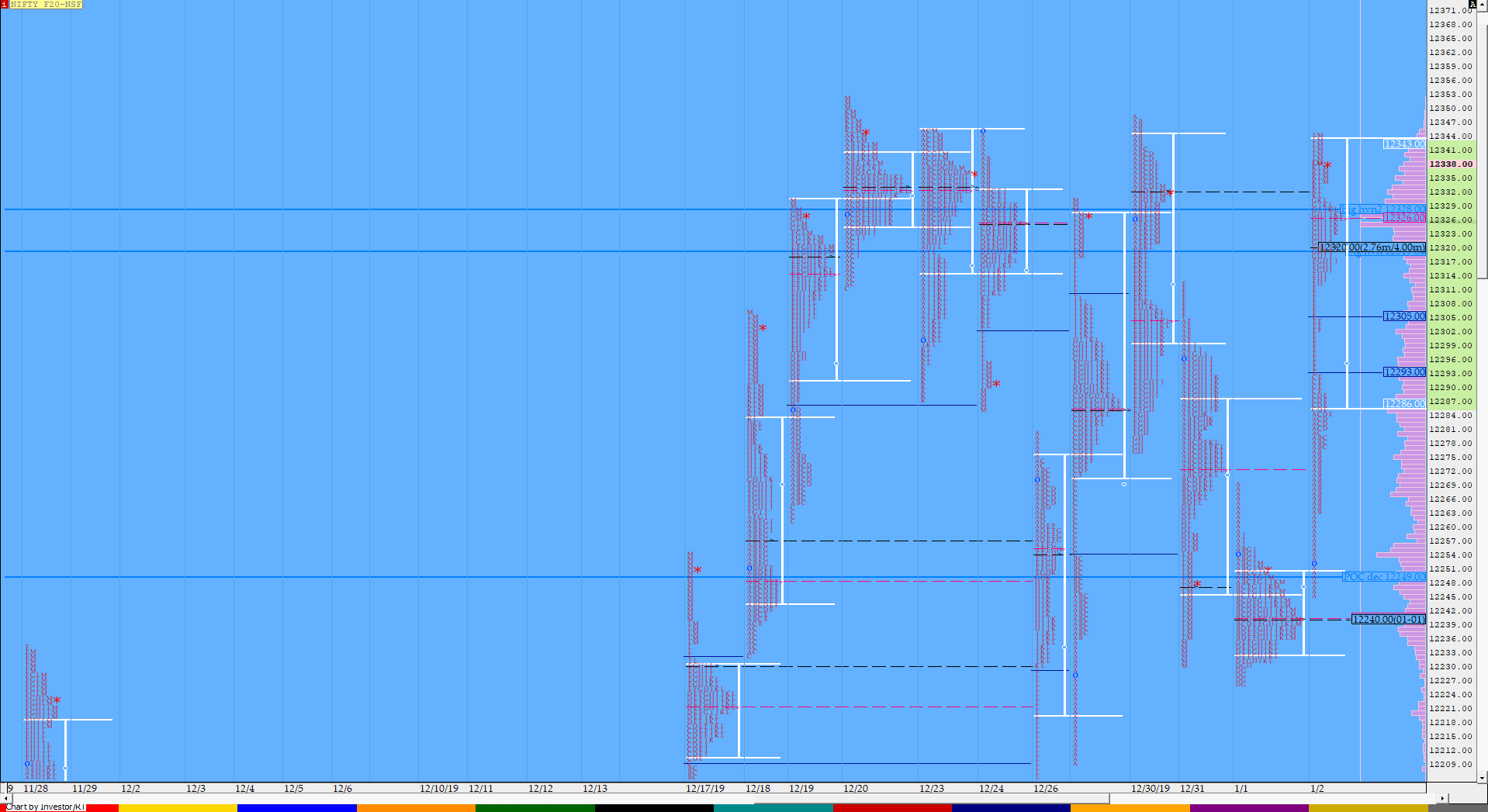 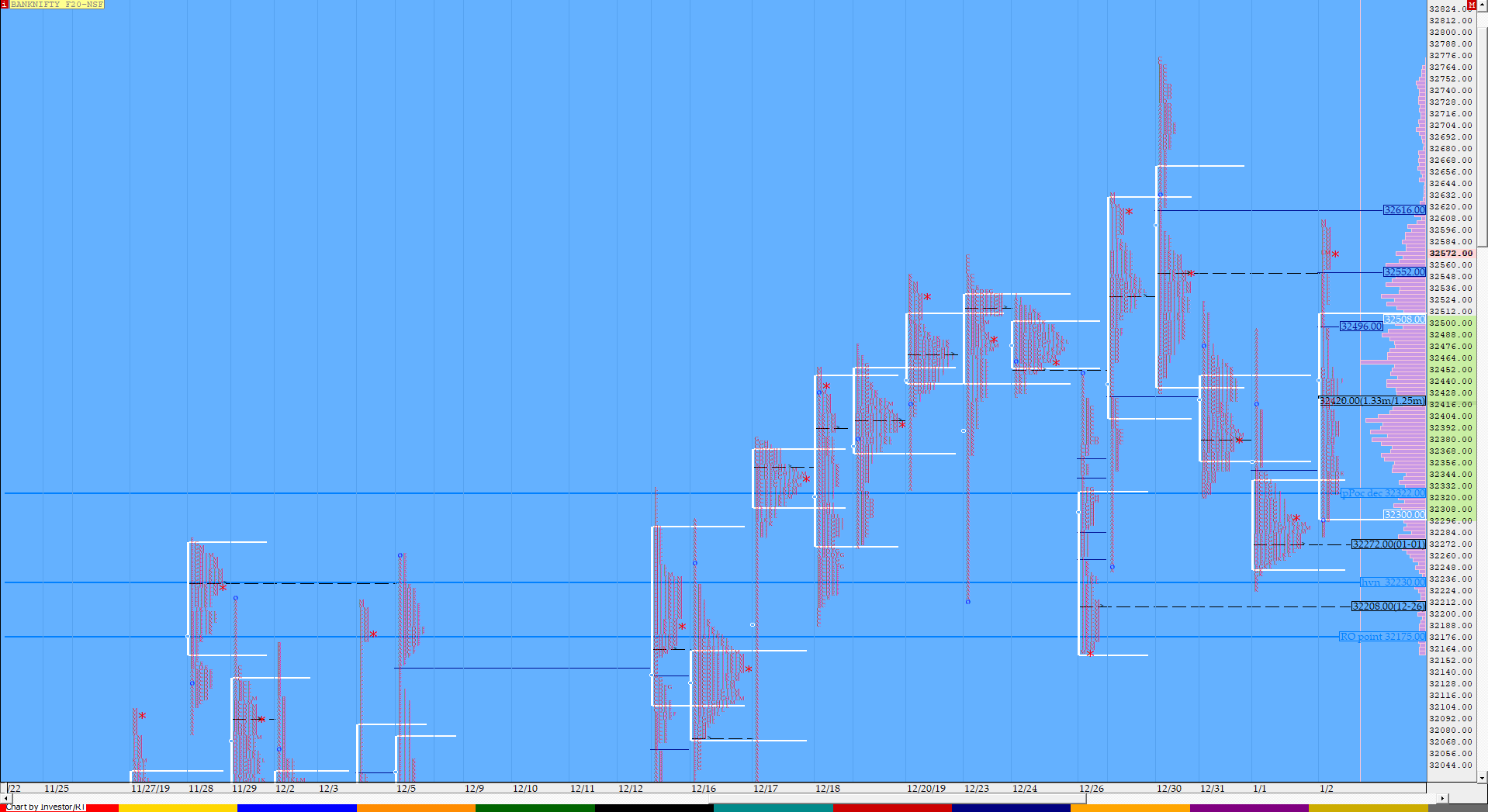 Previous day’s report ended with this ‘BNF would need to get some initiative volumes to move away from the zone of 32280 to 32300 in the coming session(s).’

BNF gave a OL (Open=Low) start to the day right at 32300 and seemed like was giving an Open Drive (OD) to the upside but got stalled at the weekly HVN of 32400 as it made a high of 32409 in the ‘A’ period from where it reversed the probe to the downside & went on to break the OL start as it made new lows for the day at 32281 in the ‘B’ period where it got some demand back as it left a small but a significant tail from 32281 to 32299 which meant that this zone is being defended by the buyers. The auction then made a slow move to the upside over the next 4 periods and in the process made a RE to the upside in the ‘F’ period followed by a higher high in the ‘G’ period as it tagged 32454 and gave a dip to VWAP in the ‘H’ period as it made a PBL of 32377 and this defense of VWAP was an important signal as it meant that the morning buyers were adding to their positions which triggered a OTF move higher into the close as BNF left an extension handle at 32480 as it scaled above PDH and went on to negate the FA of 32522 while tagging the VPOC of 32550 in the ‘K’ period and in the process even completed the 2 IB objective for the day. The action however was not over yet as BNF went on to spike higher into the close as it left a second extension handle at 32550 and went on to make highs of 32606 in the closing period to leave a slow Trend Day Up and looks good to make new all time highs in the coming session(s) with positional support at today’s VWAP of 32427.