NF opened with a gap up at 12103 and continued to probe higher testing the previous day’s selling tail of 12110 to 12146 where it faced supply once again after making a high of 12124 in the opening 10 minutes from where it not only retraced the opening move higher but also went on to make new lows as it closed the gap too in the ‘B’ period making a low of 12058 leaving yet another selling tail from 12086 to 12124 which meant the sellers were looking to take control. The auction then made an OTF (One Time Frame) move lower over the next 4 periods making multiple REs (Range Extension) as it made lows of 11985 in the ‘F’ period completing the 2 IB move down & almost tagging the VPOC of 11982 which saw some profit booking by the sellers and this led to a retracement of the entire move down from ‘C’ period as NF replicated the OTF move to the upside for the next 5 periods scaling above VWAP & matching the highs of ‘C’ period where it got stalled at 12083 leaving a PBH (Pull Back High) there to signal that the sellers were back in the same in this zone. This led to a spike lower into the close leading to new lows of 11973 as NF closed the day at 11994 marking a very bearish start to the new series. Value for the day was overlapping and extending lower and we have a 2-day composite at 12024-12057-12093 which will be the reference for the upside in the coming session. 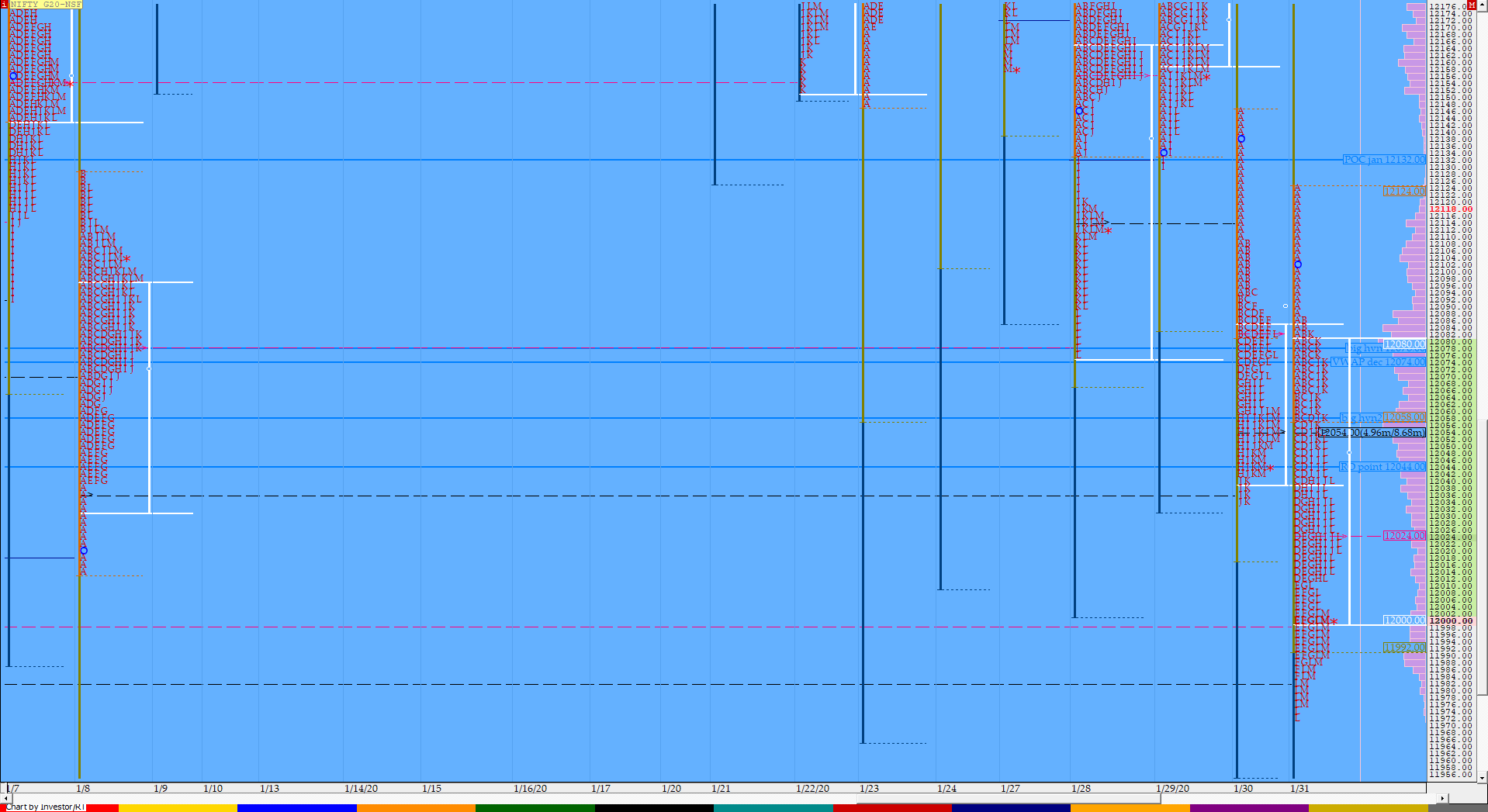 Nifty SPOT Hypos for rest of the week: 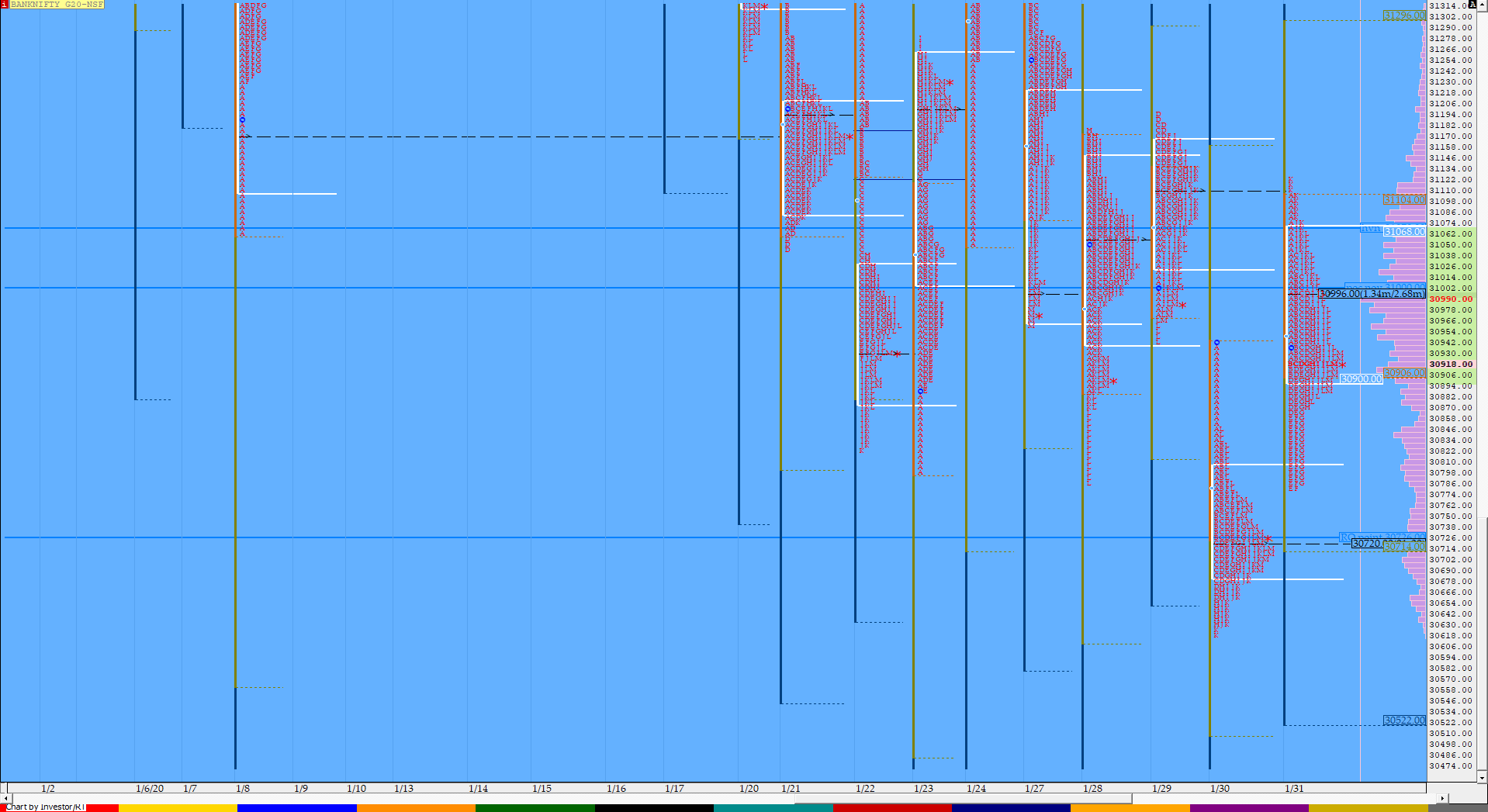 BNF opened stronger than NF with a gap up of almost 200 points as it stayed above the PDH (Previous Day High) for most part of the ‘A’ period and went on to make a high of 31104 almost tagging the VPOC of 31110 which seemed to be the objective of this upmove as the auction then probed lower making a low of 30910 in the ‘B’ period leaving a selling tail from 31019 to 31104 in the IB (Initial Balance). The auction then made an attempt in the ‘C’ period to test this selling tail but got rejected after leaving a PBH of 31040 which led to a short OTF move lower for the next 3 periods as BNF made multiple REs and signalled exhaustion of the move down by making similar lows of 30781 & 30780 in the ‘E’ & ‘F’ periods as it took support around yVAH. This triggered a short covering move higher over the next 5 periods as BNF went on to make new highs for the day at 31126 in the ‘K’ period but was immediately rejected back into the IB and went on to complete the 80% Rule in the day’s developing Value as it made lows of 30874 and in the process confirming a FA (Failed Auction) at day highs. Value was higher for the day but the FA at top hints to be a short term swing high with the reference at the downside being the VPOC of 30724 which is also the 1 ATR objective of the FA.

BankNifty SPOT Hypos for rest of the week: