Previous day’s report ended with this ‘NF has formed overlapping Value for the last 2 days with HVNs at 11069 & 11004 which would be the important references for the open in the coming session‘ and today NF opened with a big gap down of 120 points below both these references as the auction moved away from the 2-day overlapping Value as it made a low of 10913 in the ‘A’ period staying inside the previous day’s range. The auction then probed higher in the ‘B’ period as it matched the ‘A’ highs of 10970 but was not able to enter the previous day’s Value which was an indication that the PLR (Path of Least Resistance) continues to remain to the downside. (Click here to view the profile chart for September NF for better understanding) NF then made a RE (Range Extension) to the downside in the dreaded ‘C’ period as it made lows of 10908 but was still unable to break below the PDL (Previous Day Low) after which it balanced in a narrow range for the next 3 periods staying within the ‘C’ period range while making similar highs of 10942-943 confirming that probe to the upside is getting exhausted thus the PLR remained lower. The auction then made a fresh RE lower in the G period as it made a low of 10893 but there was still no sign of new OTF (Other Time Frame) sellers as NF still remained inside the previous day’s range as it made an inside bar in the H period. The ‘I’ period then made yet another RE down making a new low of 10875 finally breaking below the PDL with ‘J’ following with a lower low of 10864 almost tagging the 2 IB move down. The auction then gave the typical afternoon pull back in the K period as it probed higher but got rejected at the powerful combination of VWAP & IBL leaving a pull back high at 10911 which meant that the OTF sellers have entered and will want to take control of the close. NF then spiked lower into the close as it made a trending move in the last 45 minutes almost tagging the 3 IB objective of 10799 as it made lows of 10813. Spike Rules will come into play for tomorrow’s open & the spike reference is from 10865 to 10813. 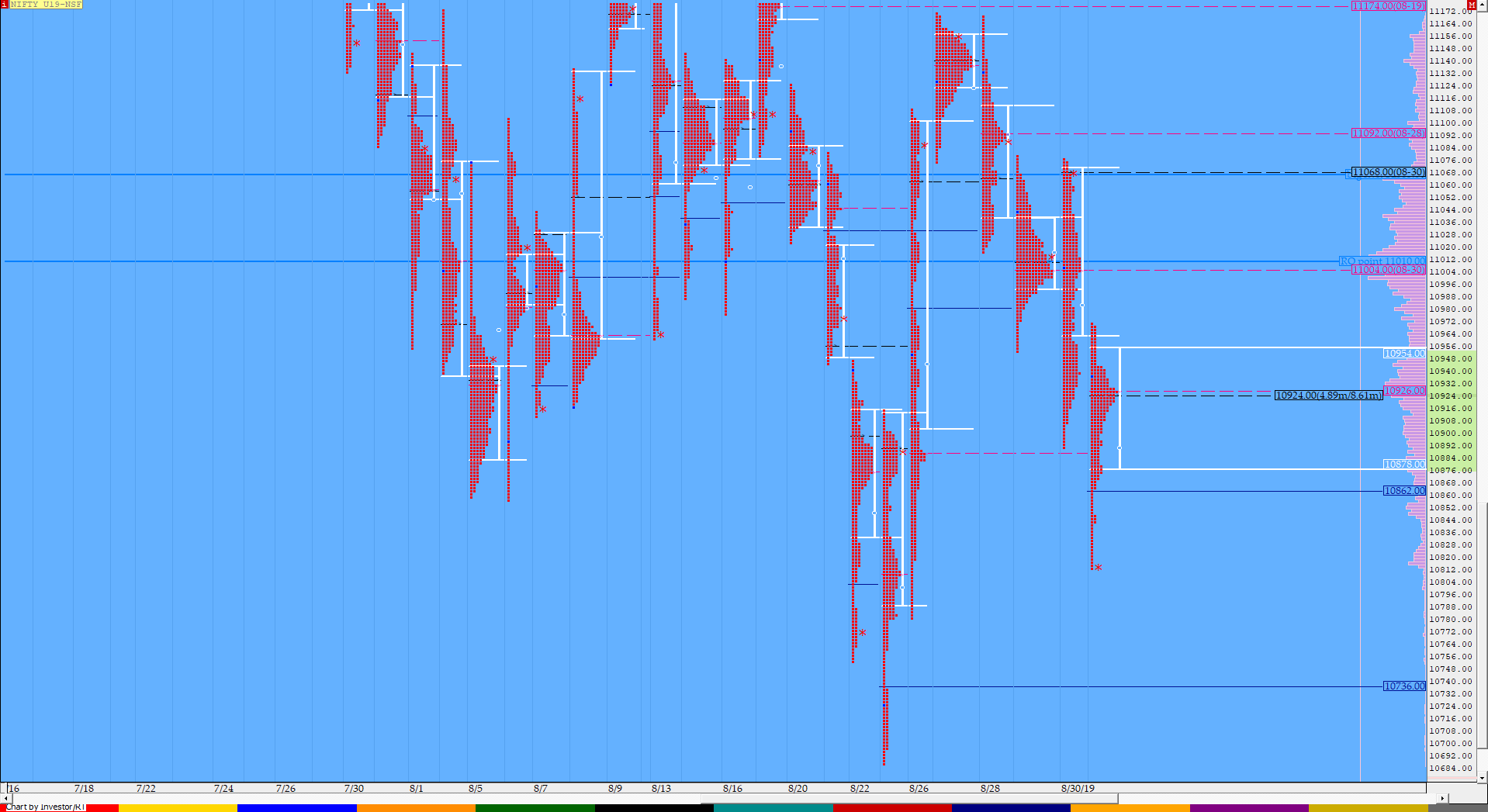 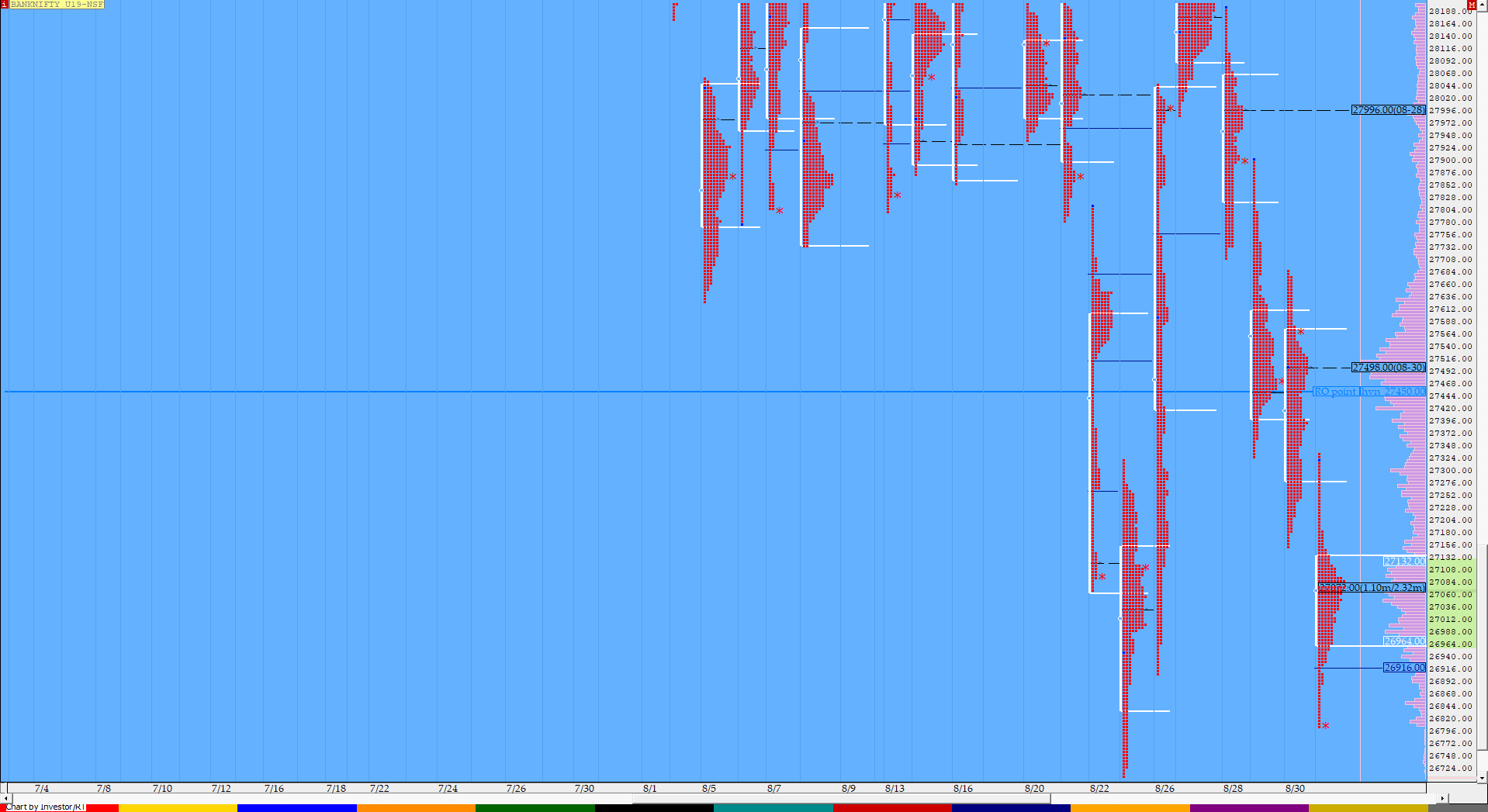 BNF not only opened with a big gap down of 200 points but also gave a drive lower as it broke below the PDL of 27151 in the A period itself and left a big selling tail from 27185 to 27333 at top in the IB as it made lows of 27010 looking weak for more downside. (Click here to view the profile chart for September BNF for better understanding) The auction then balanced in a narrow range within the IB for the next 4 periods as it made a slow probe to the upside till the E period where it made a high of 27149 stalling right at the PDL which was an important signal as BNF then resumed the probe to the downside and made a fresh RE in the ‘G’ period as it made new lows of 26967. Like in NF, the H period then made an inside bar and the ‘I’ period left a pull back high at 27093 before making multiple RE down in the next 2 periods as it tagged 26922 in the ‘J’ period. The ‘K’ period gave the customary pull back to VWAP as it left a new pull back high of 27049 after which the auction spiked lower in the last 2 periods to make new lows of 26802 to leave a ‘b’ shape profile for the day with a spike lower. Spike Rules will apply at open in the next session & the spike zone is from 26802 to 26922.