If prices move higher then we say that buyers are in control and are aggressive and if they go down then sellers appear to be controlling/ aggressive.

Often it happens that after a big move, the dominant party ( buyers or sellers)  are unable to push prices in their direction any further and an exhaustion creeps in paving the way for the opposite party to step up and move the auction their way.

It is called a Failed Auction theory. And it is very popular amongst Market Profile Traders who trade the short term.

Most of the times, the first 60 minutes appear to be the time when the market is establishing value for the day and is referred to as the Initial Balance. This is especially the case in markets like ours at the NSE which do not confirm to 24-hour futures trading and hence knowing the first 60 minutes of activity becomes very important for a trader in the day time frame.

The Initial Balance or IB as the name would suggest is the first 60 minutes of the session where we saw 2 both buyers and Sellers fairly active in an equal measure or in a balance.

As markets do not always stay within the first 60 minutes of activity the whole day, the movements outside the initial balance often produce some amazing trading opportunities for all traders.

So what is the Failed Auction Theory all about?

After a failed auction, the initial move is in the direction opposite to the one that failed, but the beauty of the theory as pointed by Ray Barros is that the market will revisit the failed auction zone in about 5-6 days in over 75 % of the cases

Let’s look at a chart to understand this : 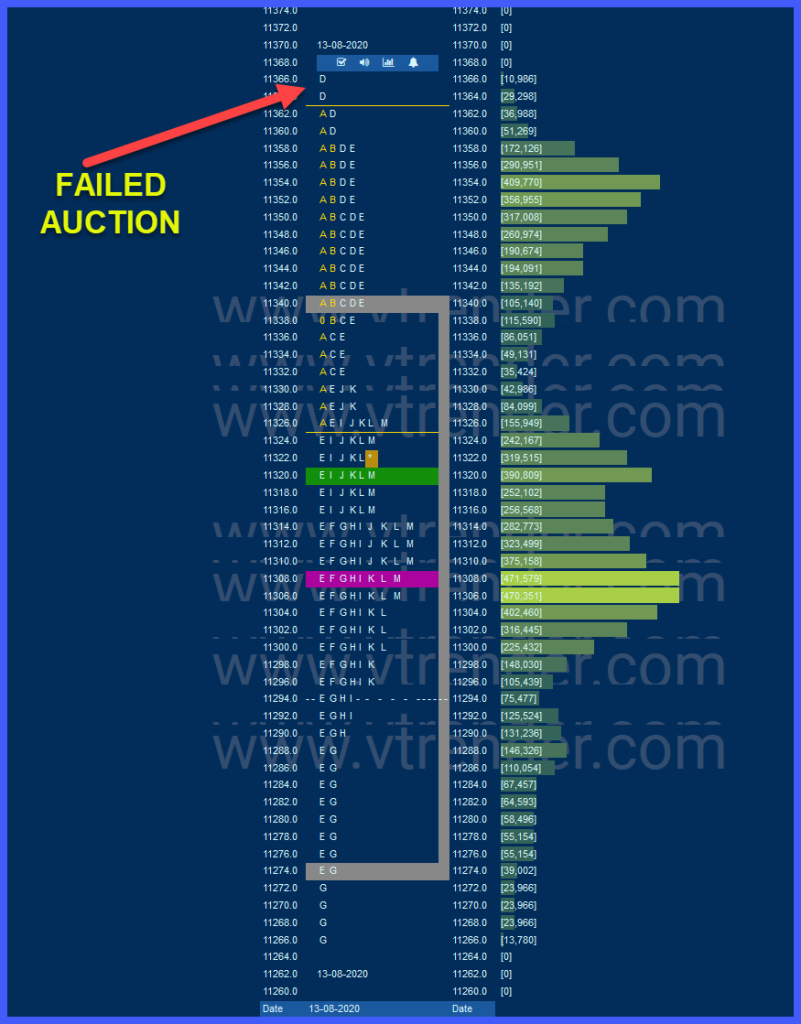 If it does not visit back in 5-6 days then the movement after the failed auction will continue for several weeks.

In the chart above

a) The Initial balance is the A and the B periods to the left and is the first hour traded range.

b) We had a failed auction when the market moved higher in the ‘D’ period but reversed immediately back into the Initial Balance.

c) The market continued the same day below the IB period and went to the other extreme.

We get an exhaustion of an existing move as Buyers failed at an extension Higher. A drop materializes from this zone which can measure up to 2 ATR of the move from the FA point. Once this drop is done we look for the presence of responsive activity and Initiative activity at the other end to confirm if the initial drivers of the first auction are back in full force and gaining in strength and thereafter a visit to the Failed Auction is almost a certainty.

The Failed auction levels are important support and resistance zones not just for Intraday Trading but also for swing trading.  If you want to know how to use this strategy in a Live market situation join the Vtrender Trading Room where this strategy is just one of the many we trade with using the Nifty Futures and the Bank Nifty futures.